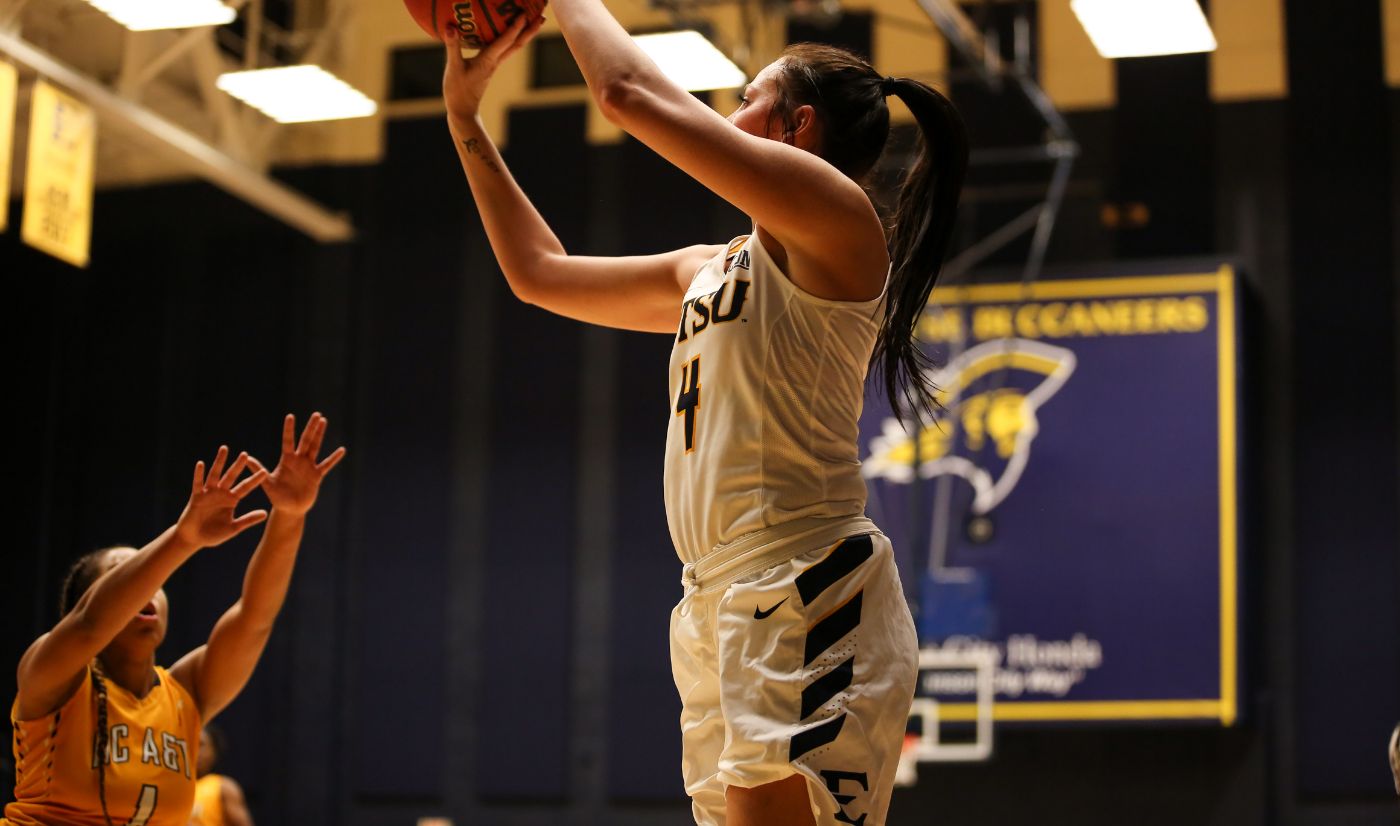 JOHNSON CITY, Tenn. (Dec. 13, 2018) – Picking up their second win inside their home confines of Brooks Gym, the ETSU women’s basketball team held on to a 61-56 win over North Carolina A&T on Thursday night. The Bucs improve to 2-11, while the Aggies fall to 2-7.

“I’m happy for the kids,” said head coach Brittney Ezell. “We’ve been talking to them about perseverance and fighting through adversity. Sometimes people need to see a little bit of success, no matter how minute or no matter how insignificant it may seem to someone else. They need to see that their hard work is paying off and it’s definitely paying off in the form of Carley Lytton. She’s getting into the gym early. She’s doing extra and it’s paying off for our kids who have been rehabbing hard to get back into playing. Micah (Scheetz) was a big factor tonight. Having Raven (Dean) back helped. We’re starting to get back to being healthy, but it’s going to take a little bit of some time to get everybody acclimated again since we were down to eight. It was nice to have the kids see some success and I’m happy for them.”

ETSU jumped out to a hot start with Haynes-Overton doing what she does best with a steal and layup, followed by a Lytton three. The Bucs kept the Aggies scoreless for the first two minutes of play and held them to just eight points throughout the first quarter. Lytton would hit her second three of the game to help the Bucs pull ahead 10-4 before ETSU would suffer a five-minute scoring drought. During this scoreless period, the Aggies were able to pull within two with two minutes remaining. Scheetz would cap off the quarter with five straight points to put the Bucs up 15-8.

Haynes-Overton and Britney Snowden (Pensacola, Fla.) helped the Bucs take a 19-14 lead before going scoreless. ETSU forced back-to-back shot clock violations on NC A&T with their tremendous defense. Both teams were unable to score for four minutes, but a layup and free throws would end the Aggies’ drought and put them within one of the Bucs with an 8-0 run. Snowden’s free throws and a Lytton three helped ETSU control their lead, but NC A&T answered with a three of their own and a layup to tie the game 25-25 at the half.

Carley Lytton continued to have the hot hand, as she swished a three to begin the second half of action. Both teams would trade points until Lytton drained back-to-back three’s to help the Bucs take a 40-33 lead. ETSU forced the Aggies to commit five turnovers in four minutes to keep them scoreless, outscoring them 21-10 in the third quarter. Haynes-Overton’s layup would put the score at 46-35 heading to the final quarter.

The Aggies did not give up as a 9-0 run helped them pull within four, 48-44. ETSU would hold a four-point lead, but the NC A&T outscored ETSU 15-6 in the first five minutes of play. The Aggies were able to take their first lead of the game after a 7-0 run sparked their offense. Back-to-back baskets by Spears and Haynes-Overton helped ETSU regain their lead, 56-53. With just under a minute remaining, Micah Scheetz came up big for the Bucs draining a deep three to give the Bucs a 60-54 lead. NC A&T would score one final basket and Lytton made a free throw to end the game 61-56.

“I think this one meant a lot. We did a lot better. We’re growing every game and I think we’re doing a lot of stuff together as a team. We did a lot of good things tonight. My teammates saw me and we all were able to find each other throughout the game. When we got low, we picked each other up.”