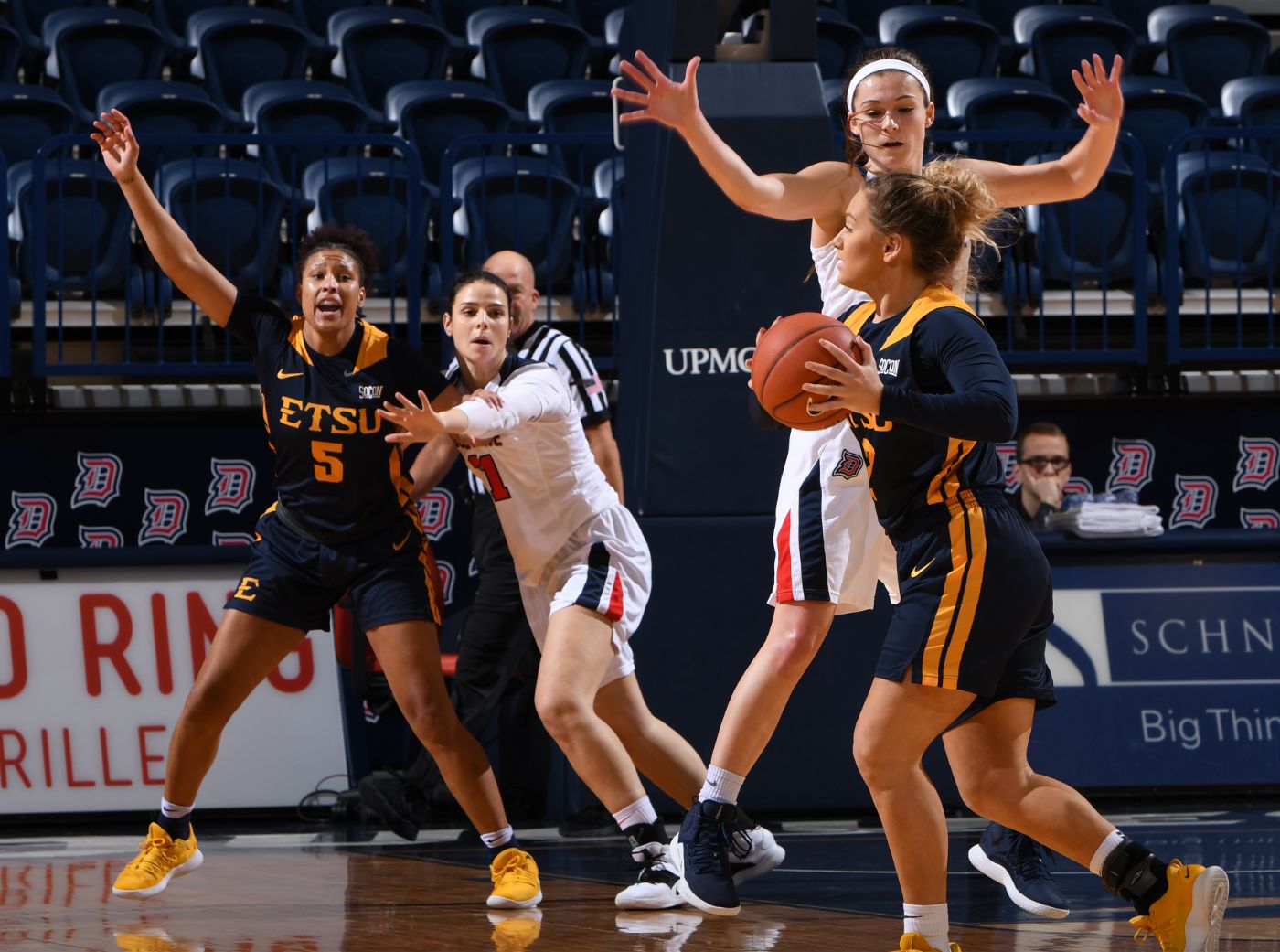 ETSU pulls within two with 1:06 remaining, but are held off in the final minute of a tough road contest

PITTSBURGH, Pa. (Dec. 16, 2018) – The ETSU women’s basketball team faced another daunting task in Pittsburgh, Pa. against Duquesne Sunday afternoon, but came up just short in its quest for a road win with a 66-58 final.

The Bucs (2-12) started strong with an 18-12 lead to open the contest, but fell behind in the second quarter and could not regain the lead. Falling behind by as many as 12 points late in the third quarter, ETSU put together a fourth quarter comeback that had Duquesne (5-4) on the ropes with 1:06 remaining — the Dukes ahead 60-58. The home team held off ETSU in the final minute, forcing the Bucs to foul their way to the finish line.

Despite allowing a three-point basket on the first possession of the game, the Bucs started strong in the opening frame. Redshirt-sophomore guard Micah Scheetz (Knoxville) went on an individual 5-0 run after subbing in midway through the opening quarter, finessing through the defense for a layup then hitting a trey from the wing on the next possession. Four other Bucs had scores in the quarter, including starters Britney Snowden (Pensacola, Fla.) and Erica Haynes-Overton (Nashville) who each had four points.

The Dukes regained home court advantage in the second segment, enchanting its fans with a 10-3 run to open the quarter. ETSU surged back following the media timeout with under four minutes to go, as Haynes-Overton capitalized on an and-one opportunity at the line and graduate post Lexus Spears (Jacksonville, Fla.) pivoted her way to a bank shot from the block to pull within two at 30-28. Duquesne had the last score before the break with 1:03 remaining to make it a four-point game. Senior Chassidy Omogrosso had 20 points in the first half to lead the Dukes. Both teams ended the half shooting 12-31 from the floor (39 percent).

ETSU went cold coming out of the locker rooms, but chipped away at the deficit to close the quarter down two possessions. Facing their largest deficit of the game with 3:37 remaining in the third at 12, 44-32, the Bucs began working the paint, finding eight points to close in on the Dukes. Freshman E’Lease Stafford (Lawrence, Kan.), senior forward Sadasia Tipps (Hickory, N.C.) and Haynes-Overton each found the net in that run. In the final seconds, Haynes-Overton poked out a steal in the backcourt, allowing freshman Kaia Upton (Nashville) to take the rock to the basket as time expired for a lay-in.

Playing from behind, the Bucs caught a second wind and kept themselves in the contest with some key three-point baskets. Down six at 50-44 with 7:11 showing on the clock, redshirt junior guard Carley Lytton (Floyd, Va.) nailed a trey on a fast break to make it a one-possession game. Snowden added to that excitement by stepping outside and draining her lone three of the contest at the 5:12 mark, once again pulling ETSU within three points of tying. Down the stretch with 2:21 to go down 58-51, Scheetz gave her team new life with a basket behind the arc. After Duquesne scored again, Haynes-Overton and Snowden made a couple of second chance baskets off offensive rebounds to pull ETSU within two at 60-58 with 1:06 to go. The Bucs caught a tough break when Julijana Vojinovic’s jumper at the other end fell through. On the ensuing possession, Snowden’s three point attempt hit off the front of the rim and forced ETSU to foul the rest of the way.

The Bucs will play their final game before the holiday break on Friday, Dec. 21 against the undefeated No. 9 Tennessee Volunteers in Knoxville. Friday’s contest will also mark ETSU’s final non-conference road game of the season before conference play.