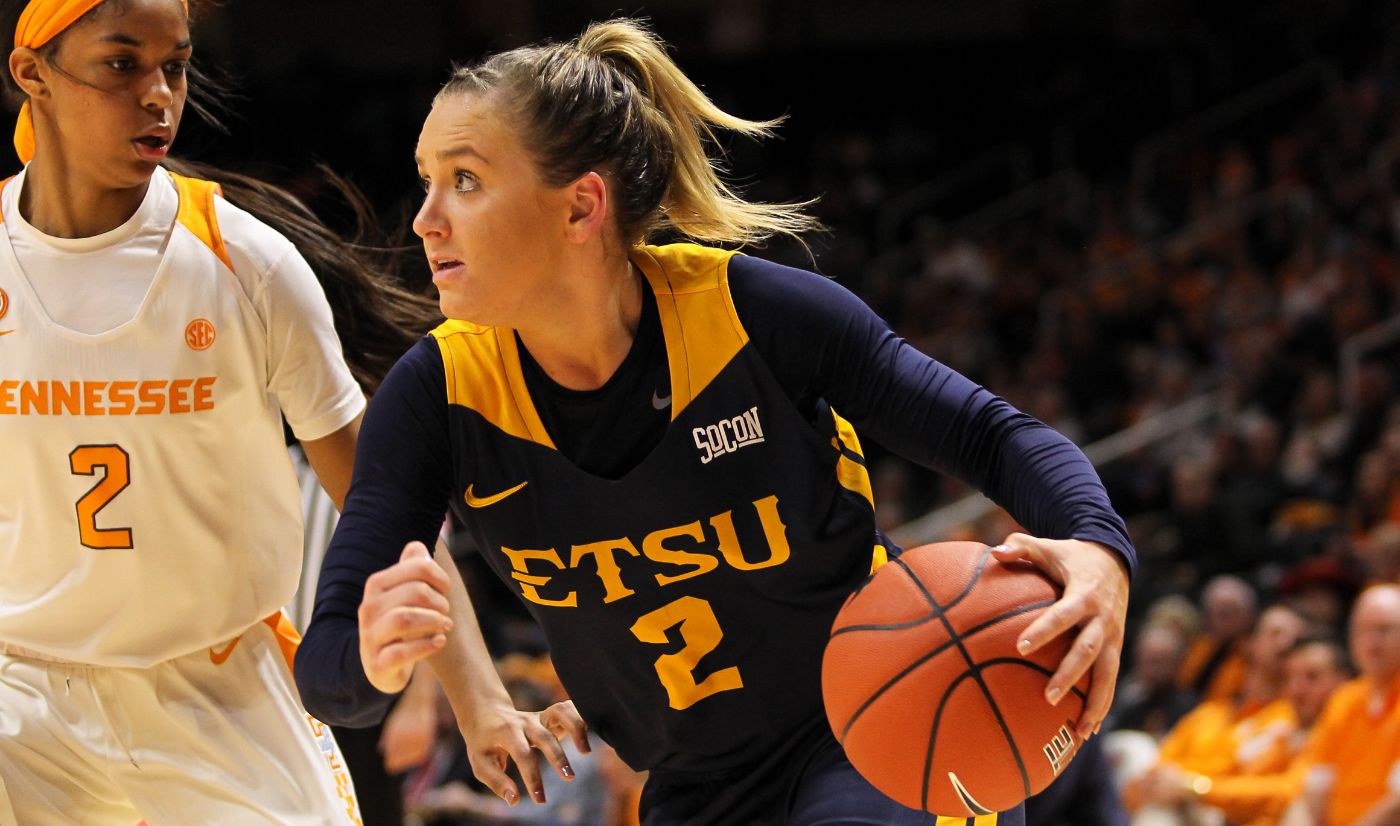 After allowing a 9-0 run to open the contest, the Bucs went toe-to-toe with one of the nation’s best teams, outscoring the Lady Vols, 28-27, to close the half. With a single digit lead heading into the final 20:00, Tennessee began to overpower ETSU, despite a strong effort from the Bucs.

The Lady Vols jumped out to an early 9-0 lead, but the ETSU defense tightened up before the media break to force Tennessee’s high-octane offense to slow down. The Bucs outscored UT 14-13 following the 9-0 run, taking a manageable 22-14 deficit to the second quarter. Heading to the media break trailing 11-5, hometown hero Micah Scheetz (Knoxville) scored ETSU’s first point, drawing free throws after being fouled behind the arc. Sophomore guard Erica Haynes-Overton (Nashville) and senior forward Britney Snowden (Pensacola, Fla.) each had baskets before the media break, then Carley Lytton (Floyd, Va.) scored ETSU’s next five with a 15-footer from the right along the baseline and a three-pointer from the center of the arc.

The 2-3 zone defense began to pay dividends for ETSU as the Bucs began to race back into the contest. As Tennessee began to slump behind the arc — shooting 2-9 on their last nine tries before the media timeout —— the Bucs started to find the basket. A Scheetz three-pointer pulled the Bucs within two possessions, 26-20, giving ETSU added momentum. Scheetz was the catalyst for ETSU in the first half, scoring nine of her 12 points in the second quarter. The 12 points marked a season-high, previously set at Cincinnati in the season opener. The two teams traded baskets en route to halftime, as Tennessee held a 10-point advantage at the break.

Tennessee came out strong in the third quarter, ending the quarter on a 14-4 run to take a 62-44 lead into the final segment. The Bucs saw a scoring drought midway through the third quarter, allowing Tennessee to take a commanding lead. Although the Lady Vols had a strong 9-16 showing from the field in the quarter (56 percent), ETSU saw more opportunities with 20 attempts in the quarter (six made for 30 percent) — thanks in part to five steals defensively. Haynoes-Overton, freshman Kaia Upton (Nashville) and senior Raven Dean (Charlotte, N.C.) each had three steals before the third-quarter buzzer.

The home standing No. 9 Lady Vols pulled away in the fourth quarter, taking their largest lead of the contest midway through the quarter at 23 points. ETSU continued to fight, nonetheless, scoring six points off turnovers and seeing 10 of its 12 players snag at least one rebound in the second half. Upton finished with a team-high 34 minutes as a freshman, as she was the only player to eclipse 30 minutes as all 12 players earned time in the contest.

EZELL ON TEAM MORALE AND EFFORT DESPITE TOUGH SCHEDULE

“With our record, it’s easy to be discouraged. It’s easy to cave in and it’s easy to think I’m crazy. Playing the Lady Vols is an opportunity that every little girl that grew up in this area wanted, and it’s my job to provide that. And it’s their job to play with that kind of energy and that kind of effort, because that’s something they will hold on to for the rest of their life.”

SCHEETZ ON PLAYING IN HER HOMETOWN

“It was really fun, and like Coach (Ezell) said, it’s every girl’s dream from Knoxville to play against the Lady Vols. It was fun to be our there. Me and (the team) were talking and it really didn’t feel like we lost. We played really well — maybe the best we’ve played in the last couple of games."

“They’ve bought in to (our scheduling). I sat in front of (the media after the Tennessee game) last year and said the same thing. We’re not going to start backing down off our schedule. You want to be good? Play the good teams. We’re picked preseason No. 1 in our conference, and I’m sure a lot of people are looking at our record wondering ‘How in the world?’ — but we’ll show you. Come watch us in January.”

The Bucs will now enjoy an eight-day holiday break away from action before returning to Brooks Gym on Saturday, Dec. 29 to take on High Point. Tipoff is set for 1 p.m. Saturday’s game is ETSU women’s basketball’s annual Heroes’ Day game, as veterans, active military, police and first responders with a valid ID will receive a free ticket and be honored at the game.