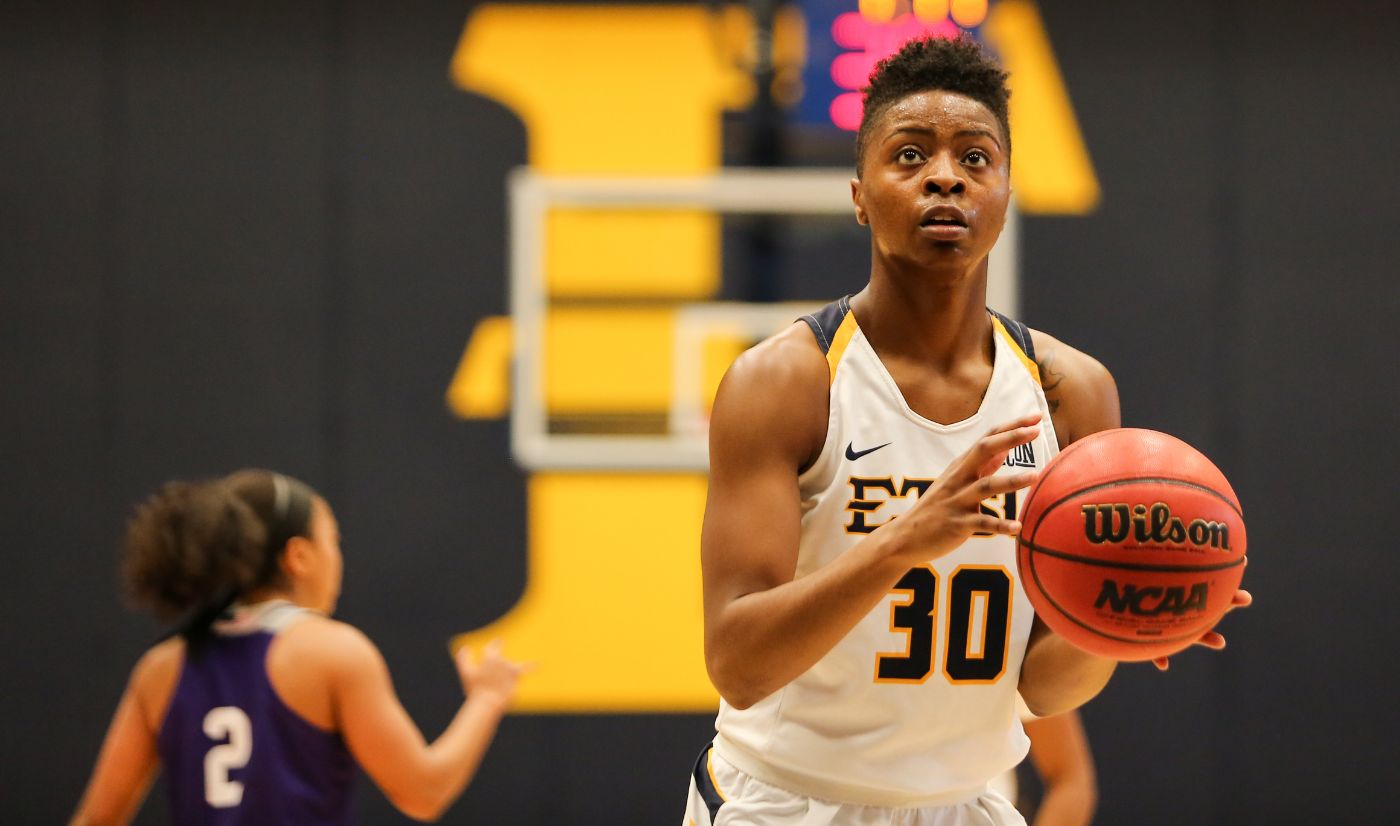 JOHNSON CITY, Tenn. (Dec. 29, 2018) – The ETSU women’s basketball team returned to action after the holiday break, but fell in a tight fourth quarter battle to the High Point Panthers by a final of 73-65 in Brooks Gym Saturday afternoon.

Graduate post Lexus Spears (Jacksonville, Fla.) started things off for the Bucs (2-14) with a layup before High Point (7-4) jumped out to a 9-2 lead hitting their next four field goals. ETSU fought back and put together a 6-0 run to pull within one, 9-8. Points went back and forth with Micah Scheetz (Knoxville) and Haynes-Overton tying the game. A High Point three, followed by a jumper would give them a 20-15 lead at the end of the first quarter. Haynes-Overton led the Bucs with five points in the opening frame.

High Point extended their lead to open the second quarter with an and-one opportunity. A jumper by Lytton and back-to-back baskets by Tipps helped ETSU stay within five. Lytton then put ETSU within three after making a pair of free throws. From there, the Bucs suffered a three-minute scoring drought, as High Point capped off a 13-2 run to end the half, 39-25. Both teams were scoreless for the final two minutes of action. Tipps went a perfect 3-3 from the field and the Bucs as a team shot 50 percent with 12 of their points coming in the paint.

Lytton drained a three to begin the second half, giving ETSU some early momentum. The burst did not last too long, as High Point went ahead 44-30 with back-to-back baskets. Tipps was a key playmaker in the third quarter as ETSU worked back into the game, making a pair of free throws and then recording a steal on the ensuing possession. Tipps then had an athletic block, one of five in the contest, and drove down the court for a layup to pull the Bucs within 10. A great look by Haynes-Overton to Tipps in the paint would give Tipps a new career-high of 12 points. High Point then went on a 7-0 run to take a 55-38 lead. Buckets by Lytton and Scheetz kept the Bucs close, and Lytton would end the third quarter swishing a three to put the score at 60-48. Tipps and Lytton led ETSU with 12 points apiece at that point.

Haynes-Overton appeared to take the game over to open the last frame, starting the final quarter with a steal and layup to once again make it a 10 point game. The five-foot-five guard then blocked a Panther player’s shot and would put the Bucs within eight after making a mid-range jumper. Following that score, Scheetz would make a layup and force the Panthers to call timeout with just two minutes of play after ETSU came within six, 60-54. High Point came out of their timeout with vengeance and made a layup and a triple to go ahead 65-54. ETSU forced four turnovers and Scheetz would drain a three-pointer to once again pull within single digits. ETSU got as close as six points with help from a 2:30 scoring drought by High Point midway through the fourth. High Point would secure the game, as ETSU missed on a couple of offensive opportunities, allowing the Panthers to gain the victory.

ETSU will turn their attention to conference play when the Bucs travel to Chattanooga to take on the Mocs on Saturday, Jan. 12. Tip-off is set for 2:00 p.m.