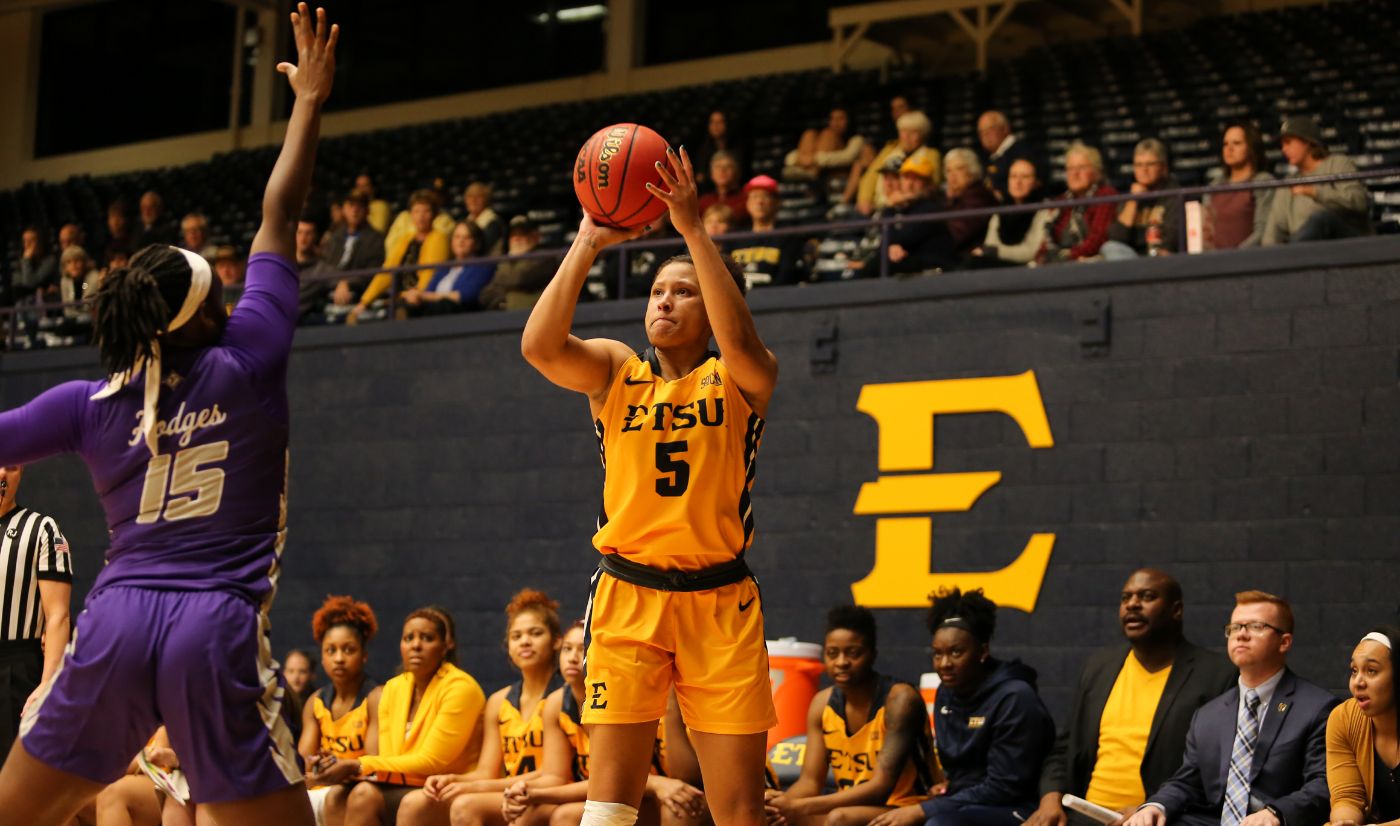 JOHNSON CITY, Tenn. (Jan. 16, 2019) – In a tight conference home opener inside a loud Brooks Gym, the ETSU women’s basketball team clinched their first SoCon win of the season after defeating the Furman Paladins on Wednesday night inside Brooks Gym.

The Bucs got off to a hot start going on an 8-0 run, as Furman was scoreless for the first two minutes of action. Haynes-Overton, Dean, and Lytton all swished three-pointers to put the Bucs ahead 15-2 within the first five minutes of the game. Furman came out of the media timeout with urgency, as they had a 16-2 run over four minutes. A three by Scheetz, followed by a jumper would put the Bucs ahead by four, but the Paladins would make one last bucket at the buzzer. ETSU would lead 22-20.

Spears made a layup to begin the scoring for the Bucs. Furman would eventually take a 28-26 lead after making four free throws in a row. Following the media timeout, the Bucs suffered a six-minute scoring drought, but Jada Craig would end it with a three. Dean made a pair of free throws to tie the game at 33. Furman would take their lead back with a jumper, but a 6-0 run by ETSU would help the Bucs hold a 39-35 lead at the half.

Haynes-Overton scored four quick points to help the Bucs grab a six-point lead. Furman was a very good free throw shooting team, as they would tie the game at 45 with four straight free throws. Following the media timeout, both teams were scoreless for three minutes. Snowden made a pair of free throws to put the Bucs ahead by two, but the Paladins would end their drought with a jumper to tie the game at 50. An and-one by Raven Dean sparked the Bucs’ momentum and would give ETSU a three-point advantage. Furman made a layup to pull within one. Scheetz made both of her free throws to give ETSU a 57-54 lead at the end of the third quarter.

Furman would come back and take a 61-59 lead. Scheetz would make a three and Haynes-Overton would swish a jumper to put the Bucs ahead 64-61. The Paladins succeeded on an and-one play to tie the game at 64. Both teams would trade points until Snowden gave ETSU a 68-65 lead after making a pair of free throws. Scheetz made her third three of the game to give the Bucs a 71-65 lead, but the Paladins would respond with a three of their own. Furman called a timeout with 12.1 seconds remaining. Their chance to tie the game failed, but they pulled within one off a layup.  Kaia Upton (Nashville, Tenn.) was fouled and made one of her free throws. With 1 second remaining Haynes-Overton intercepted the Paladins’ inbound pass and drain a three at the buzzer to give the Bucs a 75-70 win.

“It feels really good,” said Micah Scheetz. “We’ve struggled in the beginning of the season, so it feels so good to finally get a win under our belt. It’s giving us motivation for the next game. Furman is a very good team and they hit almost all of their free throws. They did everything they could to stay in the game, but I just think we pushed through to finish it out. We knew it was coming (to snap the Bucs losing streak). We knew this was the game that we needed, so we came in really hungry wanting to win this game.”

“It’s very refreshing to finally get a win, said Raven Dean. “Our hard work is paying off. We just stuck to it and kept working hard. It’s been very difficult and frustrating, but just like anything, you keep at it. We’re not the type to give up, so we just keep working hard every day. Our coaches hold us to the same standards. We just come in everyday with a positive attitude.”

“We played a really smothering defense and we tried to get really aggressive and deny passing lanes. We really clamped down on ball handlers and I was thrilled with it. We still fouled a little too much, but I thought our defense was really good.”

“It hasn’t been lack of care. It hasn’t been lack of effort. It hasn’t been of lack of being in the gym. Sometime things just challenge you. All I just kept telling them before the game is that everything you need is already here. We’ve been brought here for a reason and we’ve been going through adversity for a reason. You’re going to find out a lot about yourself tonight and you’re going to continue to find out a lot about yourself. They’ve been taking a beating, physically, mentally, emotionally. It’s been hard, but man are they tough. I’m so proud of them.”