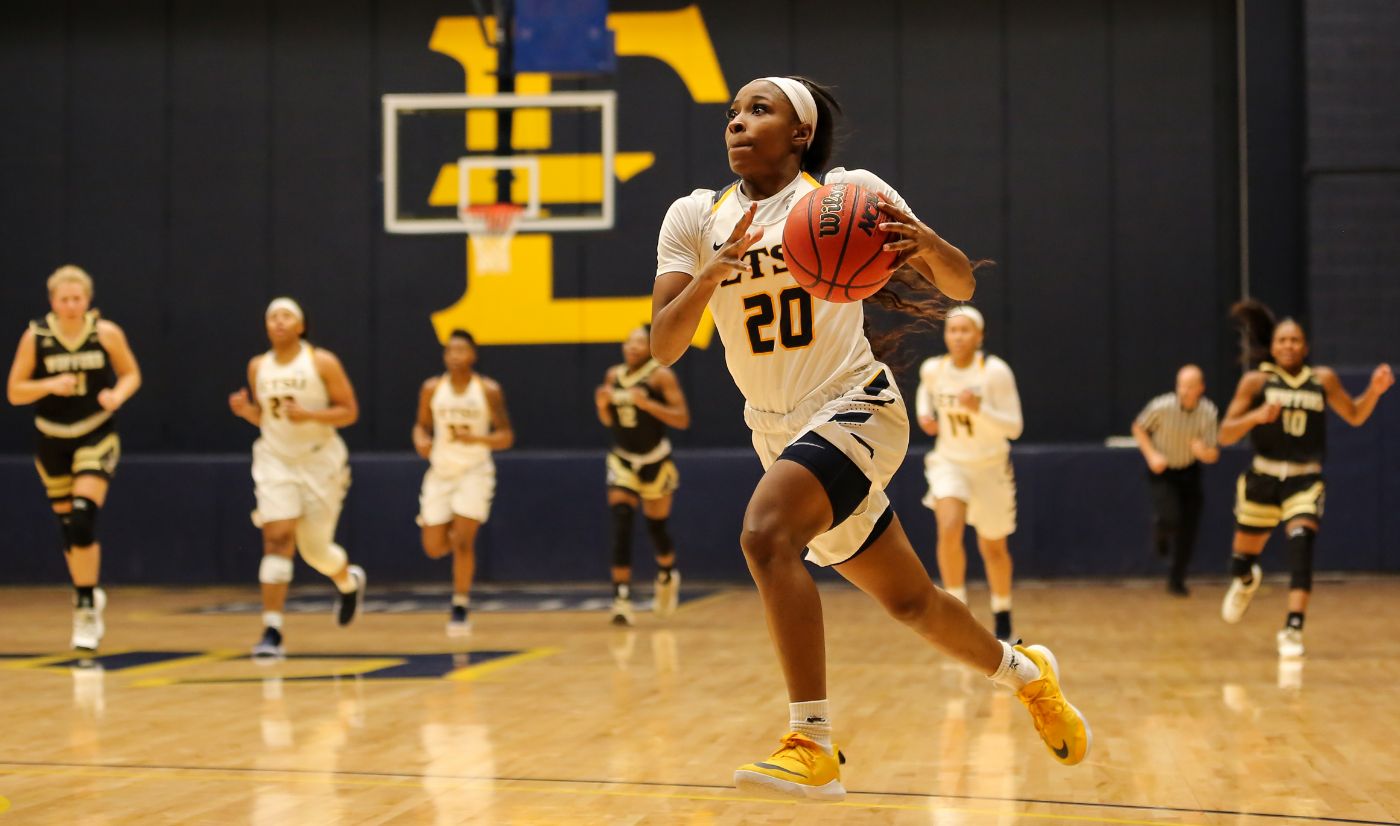 JOHNSON CITY, Tenn. (Jan. 19, 2019) – A dominant second half highlighted by a 39-point fourth quarter would push ETSU past Wofford on Saturday night inside a loud Brooks Gym. ETSU defeated Wofford 92-79 to improve to 2-1 in the SoCon, as Wofford would drop to 2-2.

In the first two minutes of action, Wofford jumped out to a 12-0 lead. Back-to-back baskets by Scheetz and Snowden would end the Terriers run, but Wofford would continue to control a ten-point lead halfway through the first quarter. A free throw by Spears and a steal and layup by Haynes-Overton would make the score 16-9. Scheetz and Haynes-Overton would help the Bucs pull within five, but Wofford made one last shot to end the quarter 20-13.

Wofford started the second quarter with a three to regain their ten-point lead. Points would trade back and forth, as Tipps scored six points for the Bucs to keep ETSU in the game. Upton made three free throws to help ETSU pull within five, as Wofford suffered a two-minute drought. The Terriers would end their drought with a three. Snowden was a key aspect in the paint to also keep the Bucs within reach before Lytton drained a three and Haynes-Overton made a layup. ETSU pulled within three, but back-to-back jumpers by the Terriers would give Wofford a 38-31 lead at the half.

Wofford started things off in the second half to take a nine-point lead. A layup by Haynes-Overton and a three by Scheetz would make the score 42-36. Wofford would answer with a three of their own, but a layup by Haynes-Overton and another three by Scheetz continued to help the Bucs pull within four. ETSU made six of their last seven field goals after Haynes-Overton made back-to-back baskets, bringing ETSU within two points. The Terriers would go ahead by five after making three free throws. Jumpers by Tipps and Scheetz would get ETSU within one at 50-49. Wofford ended their three-minute scoring drought with a three to pull away by five. Snowden and Scheetz each made both of their free throws and ETSU would trail 56-53 at the end of the third quarter.

Scheetz would drain her third three of the game to tie the score at 56. This sparked an 8-0 run for the Bucs, as they made their last seven field goals to grab a 64-58 lead. Haynes-Overton was a catalyst in the Bucs’ passing game feeding the ball to Snowden, Tipps, and Spears in the paint. Back-to-back layups by Snowden would give the Bucs a ten-point lead and the Terriers would go scoreless for four minutes. ETSU continued to hit their shots making ten of their last twelve, to score a record-breaking 39 points in the fourth quarter. Raven Dean (Charlotte, N.C.) would swish a three and Scheetz had an and-one, as ETSU went ahead 79-65. The Terriers would attempt to foul, but Upton and Dean would hit their free throws. A three and a layup helped the Terriers pull within ten, but Upton once again hit a pair of free throws and ETSU would come away with the 91-79 win.

Micah Scheetz on her career-high

“My shot was falling and my teammates were getting me open and giving me the ball,” said Scheetz. “I was just taking the shots that I was given. At halftime we knew we were up and down and Coach Ezell said that we had to pick it up to win this game. We went into the third quarter knowing we had to be steady and play really well and chip away when we could and that’s exactly what we did. We have to grow from that. We can’t be up and down.”

“I think my teammates found me and I worked harder to be open under the basket,” Snowden said. “I think I worked hard for that position. I hustled harder to box out. Coach Ezell just told us that we were flat and that we needed to find our energy and get back to who we are. During that long stretch we had in preseason, I think that we really found ourselves. We really found our toughness.”

At the end of the third quarter we were down by three and we drew up a play that was a little slip screen for Micah,” said Coach Ezell. “She was feeling really good about her shot. The shot goes in and we get the foul and get the ball back. At that point we really started rolling. They felt good about it because they executed something we’ve drawn up. They get a foul and come back and get a bucket and now we’re up two and then they just keep going. I always felt like once we got the lead, we’d be fine. It was just getting the kids over the hump. I’m over there clapping and turning into a cheerleader and sometimes you have to do it. I feel like I’m dragging them sometimes. Once they took some ownership of their own, I could leave it alone and just really watch the game. Leadership has to come from them, but I can’t stop doing my job. My job is to get the most out of the 14 that we’ve got.