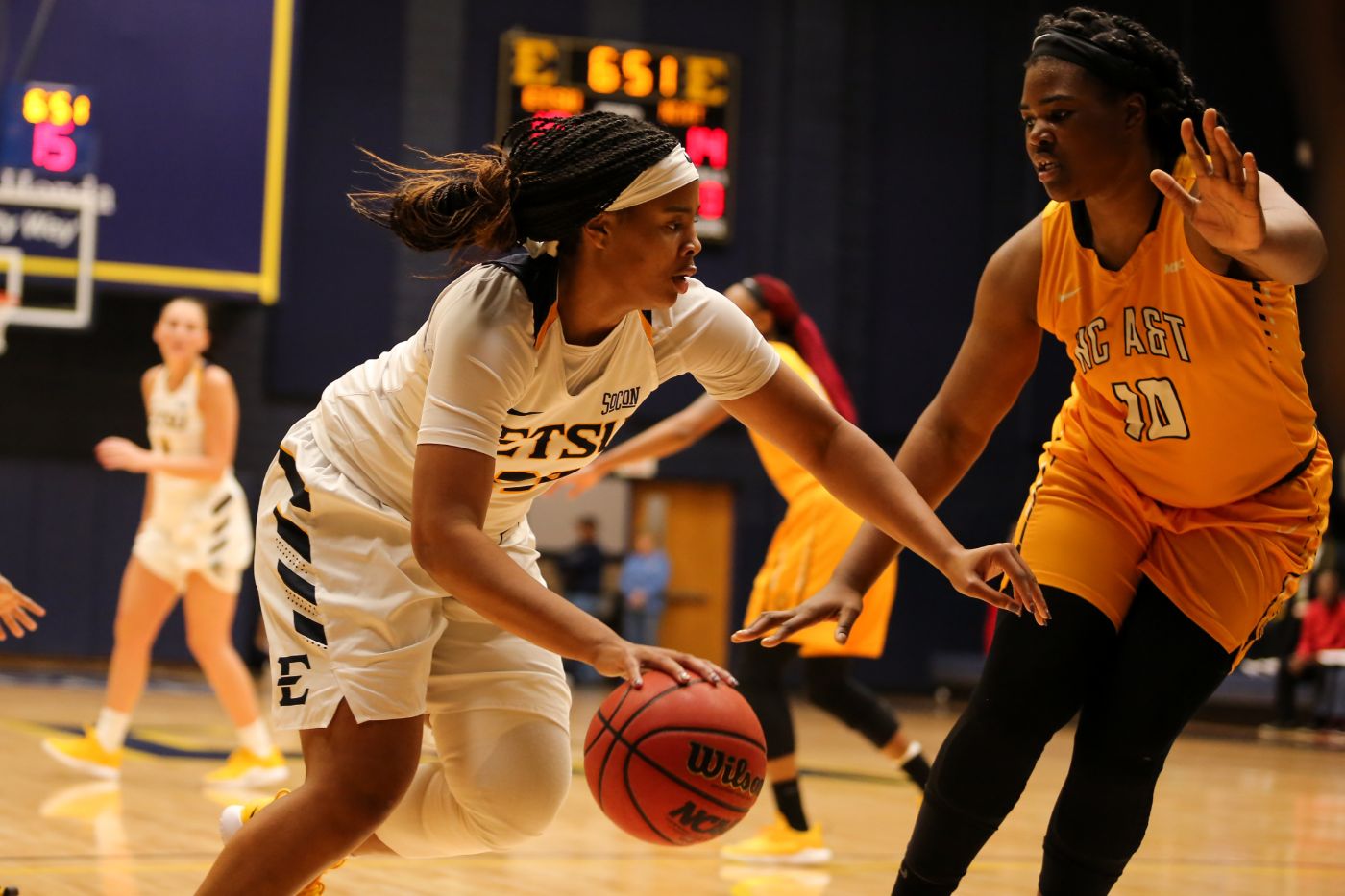 Mercer started things off with a jumper, but Haynes-Overton would tie the game with a jumper. ETSU suffered a four minutes scoring drought, as Mercer would go ahead 7-2. Dean ended the drought with a layup after Haynes-Overton fed her a great pass. Back-to-back baskets by Anajae Stephney (Knoxville, Tenn.) and Spears would put the Bucs within one. Sadasia Tipps (Hickory, N.C.) tied the game at nine with a free throw, but Mercer drained a three and a jumper to end the first quarter with a 14-9 lead.

Both teams were scoreless for the first two minutes of action. Snowden’s layup and free throw helped ETSU pull within three, as Mercer was scoreless for four minutes. Spears grabbed a rebound and put up a layup and got the Bucs within one. Mercer ended their drought with a jumper, but freshman Shynia Jackson came up big with her second career three-pointer to tie the game at 18. Snowden gave ETSU the lead with her put back and ETSU would have a 20-18 lead at the half. The Bucs scored 11 points and held the Bears to just four points in the second quarter. ETSU held Mercer to a 16.7 shooting percentage.

Mercer scored the first six points of the quarter to take a 24-20 lead. Snowden and Haynes-Overton each made layups to keep the Bucs within two. Mercer started to heat up and went on a 7-0 run, taking a 35-26 lead. Haynes-Overton ended a three-minute scoring drought after draining a three. She would help the Bucs pull within five with a jumper, but Mercer hit a three at the buzzer to lead 39-31.

The Bears had a 11-0 run to begin the quarter to go ahead 50-31. Tipps and Kaia Upton (Nashville, Tenn.) each scored layups for the Bucs, but Mercer had another 9-0 run. Scheetz made four free throws in a row, but Mercer would win 64-41.

“This is what people need to understand and what our kids need to understand,” said head coach Brittney Ezell. “Those are my kids. We believe in them. They’re going through something rough. They’re learning. It wasn’t good today by any stretch, but they’re mine. We’re going to keep fighting for them and they’re going to get it right. I promise. Right now it’s just tough. My heart breaks for them and for the people that support them and watch. I’m emotional, but gosh we’re just still 2-3 and we’ve got three home games coming up, so hang on.”

ETSU returns to Johnson City and will host UNCG on Thursday, Jan. 31 at 7:00 p.m. For every ticket sold, one dollar will be donated to the Niswonger Children’s Hospital.