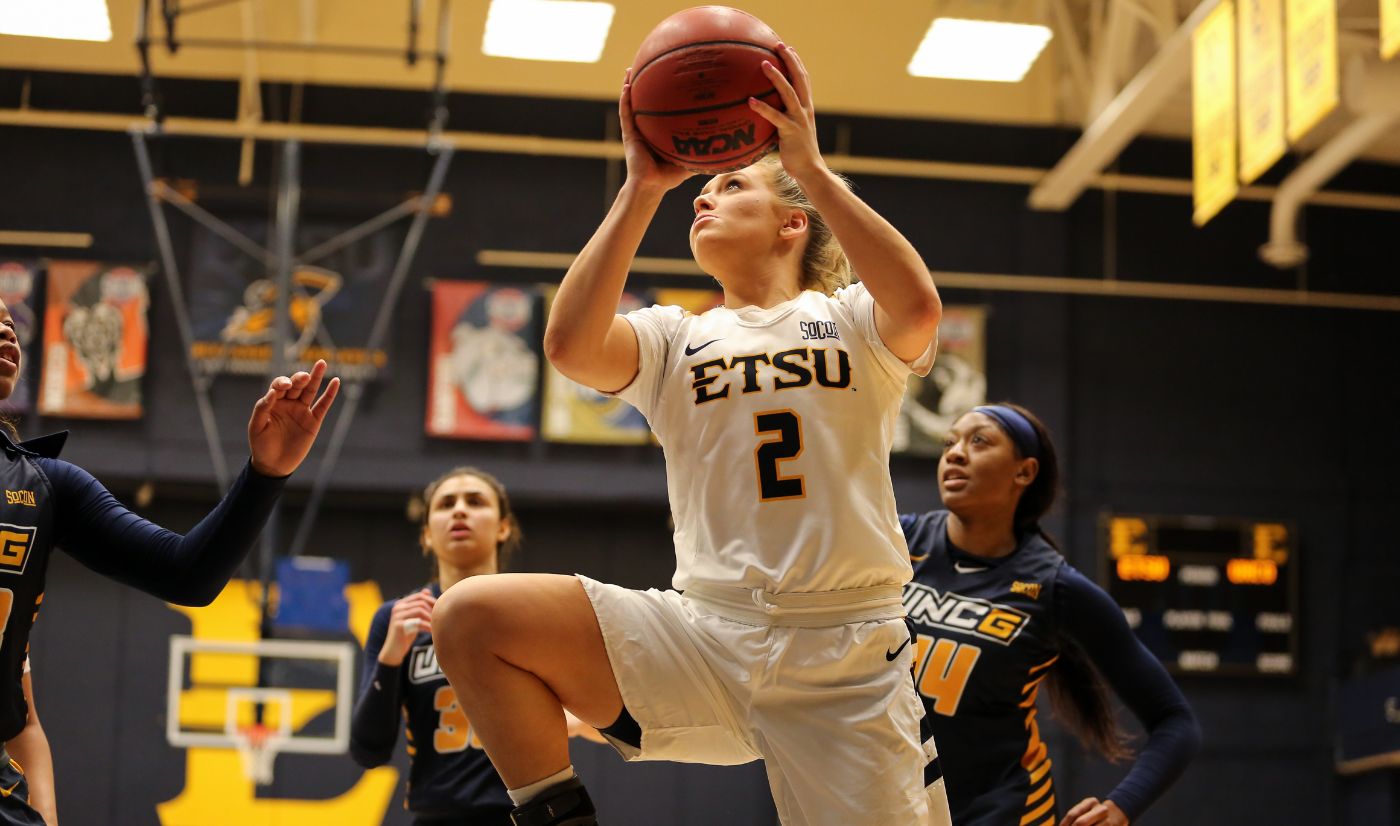 Haynes-Overton quickly set the tone after making a layup with just four seconds into the game. ETSU jumped out to a 10-2 lead after going on a 6-0 run. The Spartans would battle back after a 7-0 run to pull within one, as the Bucs were scoreless for two minutes. Upton ended the Bucs drought and Scheetz would make back-to-back layups to help ETSU pull ahead 16-9. UNCG made two baskets to get within two, but layups by Snowden and Upton, along with a jumper by Anajae Stephney (Knoxville, Tenn.) would give ETSU a 22-13 lead at the end of the first quarter. ETSU shot 52.9 percent from the field and was perfect at the free throw line.

Scheetz continued to stay hot after draining a three to extend the Bucs’ lead to 25-13. The Spartans stayed in the game with their free throws and would eventually come within five after going on a 7-0 run. A jumper by Dean and a three by Scheetz continued to keep the Bucs out in front with a 35-29 lead at the half. Scheetz scored 11 points in the second quarter and had 17 points in the first half.

UNCG came out of the half with a three and jumper to pull within one. Snowden swished a jumper but the Spartans drained a three to tie the game at 37. They would take their first lead of the game with a layup, but Haynes-Overton made back-to-back baskets to put ETSU out in front. UNCG continued to fight, but a three by Haynes-Overton helped the Bucs take a 49-45 lead. Both teams traded points and Haynes-Overton made a jumper at the buzzer, giving the Bucs a 57-51 lead. She scored 11 of ETSU’s 22 points in the third quarter.

Haynes-Overton was a force to be reckon with in the final minutes of action, scoring 13 points in the fourth quarter. The Bucs held a four-point lead at the beginning of the quarter before Scheetz and Haynes-Overton’s layups pushed the Bucs ahead 69-61, as the Spartans were scoreless for three minutes. Senior Snowden broke the game open, 72-61 after draining a three. The Bucs controlled their ten-point lead and Scheetz, Upton, and Haynes-Overton all made their free throws as time ticked down on the clock. UNCG would end the game with a final jumper, but the Bucs would come out on top with an 85-76 win.

Opening statement: “I’m really happy with tonight’s win,” said head coach Brittney Ezell. “For us to score 85 points and bounce back after the weekend we just had. I thought we showed a lot of resilience. We did a good job from the free throw line. We did a good job on the glass. Micah and Erica did a good job in many ways on the offensive end to keep us going. I’m happy for the kids. Forty points in the paint is always good, but as a coach of course I’ll go back and find some things to pick on. We have a short turnaround for Western Carolina on Saturday and I’m hoping we’ll have another good crowd here to help us out.

On winning three straight home games: “It’s a much more friendlier environment,” Ezell said. “I think our kids like playing in Brooks. I think you have to show a little bit more toughness than we’ve have to be able to win on the road. For some reason they are just a little bit tougher here and that’s been historically the case with our program. We do really well at home and I think they take a lot of pride in defending their home court. They try to do it for the fans, but it’s the same things I’ve talked to them about. They never let me down and they never let the fans down, because they play hard and they give the right level of effort. If you play hard and have the right attitude it’s all you can ask for.”