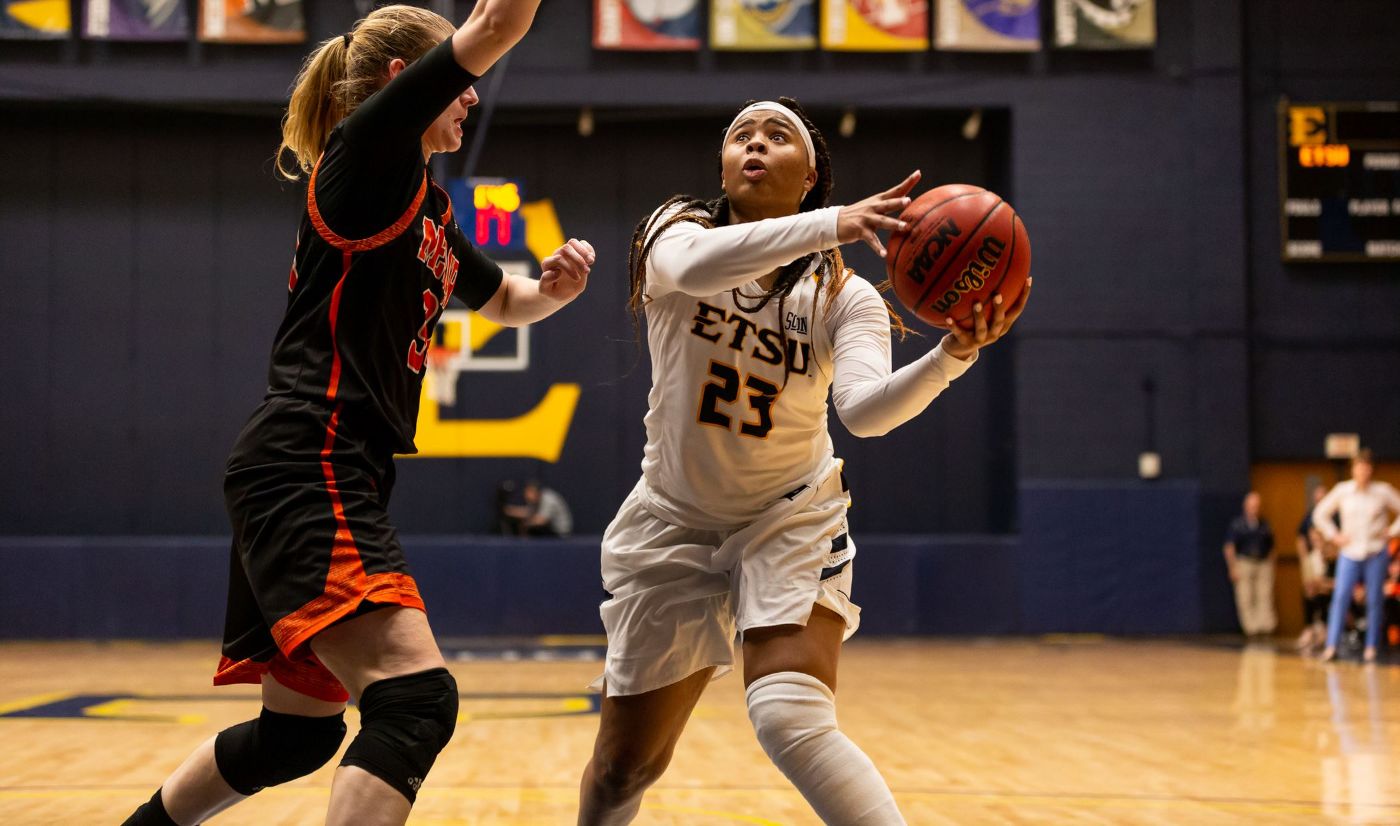 JOHNSON CITY, Tenn. (Feb. 21, 2019) – After falling behind by 14 in the second quarter, ETSU had a furious comeback, tying the game twice to send the Bucs to their second straight overtime game. Mercer would outscore ETSU 8-2 in overtime to come away with an 83-77 win.

Mercer started things off with a three, followed by a layup to take a 5-0 lead, as the Bucs were scoreless for the first two minutes of action. ETSU stayed within two of the Bears before Mercer went on a 6-0 run to take a 17-9 lead. Mercer shot 71 percent from the field and made their last five field goals of the quarter to go ahead 25-15. The Bucs outrebounded the Bears 12-6 and Snowden led the Bucs with five points.

Mercer made back-to-back layups before ETSU went on a 6-0 run to pull within eight. Spears and Tipps were key playmakers in this run, each scoring three points apiece. The Bears would pull away by ten, as the Bucs faced a two-minute drought. E’Lease Stafford (Lawrence, Kan.) drained her first career three to end the Bucs’ drought. Spears continued to do damage in the paint, finishing the first half with 11 points. ETSU continued to outrebound Mercer 14-8, but the Bears would lead 40-32 at the half.

Haynes-Overton scored ETSU’s first six points of the quarter. A jumper by Dean and a layup by Spears helped the Bucs come within four. Dean came up big for the Bucs draining a three, putting the Bucs within one, 47-46. Both teams would trade points, as the Bucs continued to stay as close as three. Mercer drained a three and Snowden kept the Bucs within four with a layup. Mercer made back-to-back baskets to extend their lead to eight, 58-50 to end the quarter.

ETSU outscored Mercer 25-17 in the fourth quarter and shot 56 percent from the field. It was a back and forth battle until Tipps started a 10-0 run to help ETSU tie the game at 68. Mercer would go scoreless for four minutes. Haynes-Overton made a free throw to give ETSU their first lead of the game, but Mercer would make back-to-back layups to regain their lead. Spears put the Bucs back within one with a layup. Both teams made both of their free throws, as ETSU would trail by one. With 8.8 seconds remaining Mercer made one of two free throws. Haynes-Overton drove to the hoop and was fouled. She tied the game at 75 with a pair of free throws. Mercer tried to get off one last shot, but it was no good, sending the game into overtime. Haynes-Overton scored nine points in the fourth quarter. Snowden, Scheetz, Tipps, and Spears each had four points each.

Mercer scored the first points of the overtime with a layup. Scheetz tied the game at 77 with a layup of her own. From there, Mercer would go on a 6-0 run, as ETSU suffered a three-minute drought and the Bears would come away with an 83-77 win.

“If we would play the entire game with the same urgency that we typically play fourth quarters, we’d never find ourselves in these scenarios,” said head coach Brittney Ezell. “I’m proud of the way they fought back. I’m proud of offensive rebounding. I’m proud of them at the free throw line. We did enough silly things to give the game away. We’ll continue to go about our business the best way we know how and all we know how to do is work here. That’s who we are. It’s going to pay off because I genuinely believe people that work hard are rewarded. I genuinely believe it’s going to pay off.”

The Bucs play one last game in Brooks Gym, this Saturday, Feb. 23 when ETSU hosts Samford for Senior Day. Tipoff is set for 2:00 p.m. with Senior Day ceremonies beginning prior to the start time.