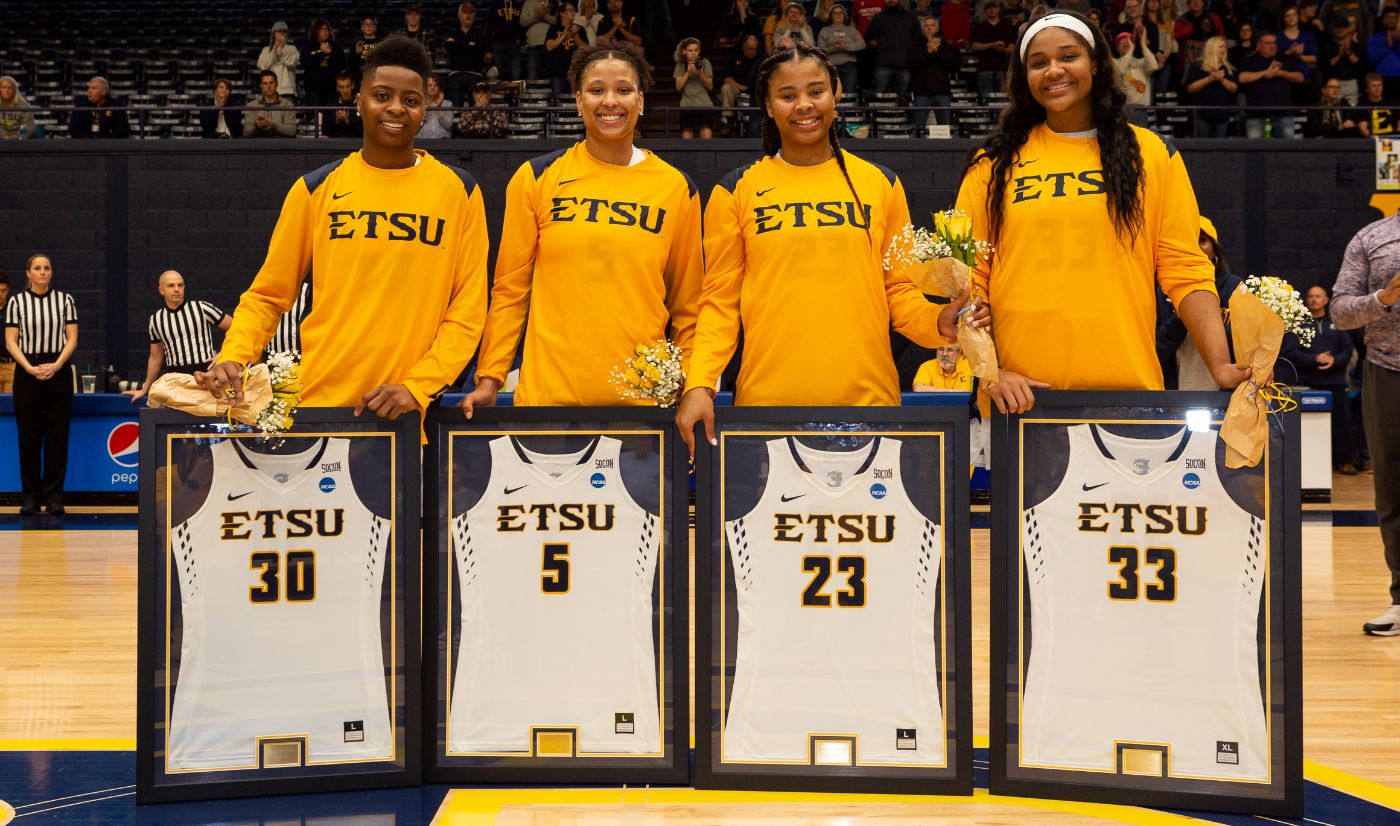 JOHNSON CITY, Tenn. (Feb. 23, 2019) – After two close heartbreaking losses in overtime, the ETSU women’s basketball team bounced back to defeat Samford 71-50 on Senior Day in Brooks Gym. Prior to the game, the ETSU Department of Intercollegiate Athletics honored all the seniors that played in today’s game.  For ETSU; Lexus Spears, Britney Snowden, Raven Dean, and Sadasia Tipps and for Samford; Cassidy Williams.

Spears made a free throw to score the first point of the game. Samford was scoreless for the first three minutes of play before going on an 8-0 run to take an 8-1 lead. Snowden and Haynes-Overton were dominant for the Bucs, going on an 8-0 run, as Samford suffered a three-minute drought. Haynes-Overton had back-to-back steals and scores, while Snowden had a steal and basket to give ETSU a 13-12 lead to end the quarter. Snowden finished the quarter with eight points and went a perfect 4-4 in field goals.

Dean started things off with an and-one, extending the Bucs’ lead to 16-12. Samford made a layup before ETSU started to heat up. Snowden grabbed an offensive rebound, passing to Upton to give ETSU a five-point lead, which would start a 12-0 run over three minutes. Haynes-Overton’s free throws would eventually give ETSU a 15-point lead. Samford made a layup to end their five-minute drought, but the Bucs were relentless. ETSU shot 47 percent from the field and outscored Samford 22-9 in the quarter. Haynes-Overton had 14 points and four steals at the half, while Snowden had nine points and two steals.

Snowden continued to shine, quickly getting an and-one within ten seconds of play. Upton and Haynes-Overton had back-to-back points, extending the Bucs’ lead to 42-21. Samford had a 6-0 run, but that wouldn’t phase the Bucs, as Scheetz scored six straight points on an and-one attempt and a three. Samford made one last layup before going scoreless for three minutes. Dean drained a three and had a layup to give ETSU a 55-29 lead. The Bucs shot 50 percent from the field, holding Samford to 25 percent and outscoring the Bulldogs 20-8.

Samford had an 8-0 run to begin the quarter, cutting their deficit to 20. Samford made back-to-back three-pointers before going scoreless for five minutes. ETSU had a 6-0 run with Snowden’s free throws and two straight layups by Spears. The rest of the quarter would be a game of three’s. Samford ended their drought with a three, but freshman Shynia Jackson (Warner Robins, Ga.) came hot off the bench swishing her third collegiate three. Samford would make one last triple, but ETSU would come up big with a 71-50 win.

“Today was about these four seniors,” said head coach Brittney Ezell. “Two that have been here for four years. Britney has been here for two and Lexus has come in for her last year. It’s really an awesome opportunity to honor them and celebrate them for everything they’ve done for our program, not just on the basketball floor, but who they are as people. To be able to have a win like that on their day is something they’ll always remember. The fans were phenomenal. It was a great crowd again. Their teammates really sold out for them today. These four came ready to play and lead from the get go. To be able to put four posts on the floor to start the game is a testament to their willingness to work on the defensive end. I thought that’s where the game was won, on the defensive end.”

ETSU concludes the regular season on the road when they take on Western Carolina on Thursday, Feb. 28 at 7:00 p.m. followed by UNCG on Saturday, March 2 at 4:00 p.m.