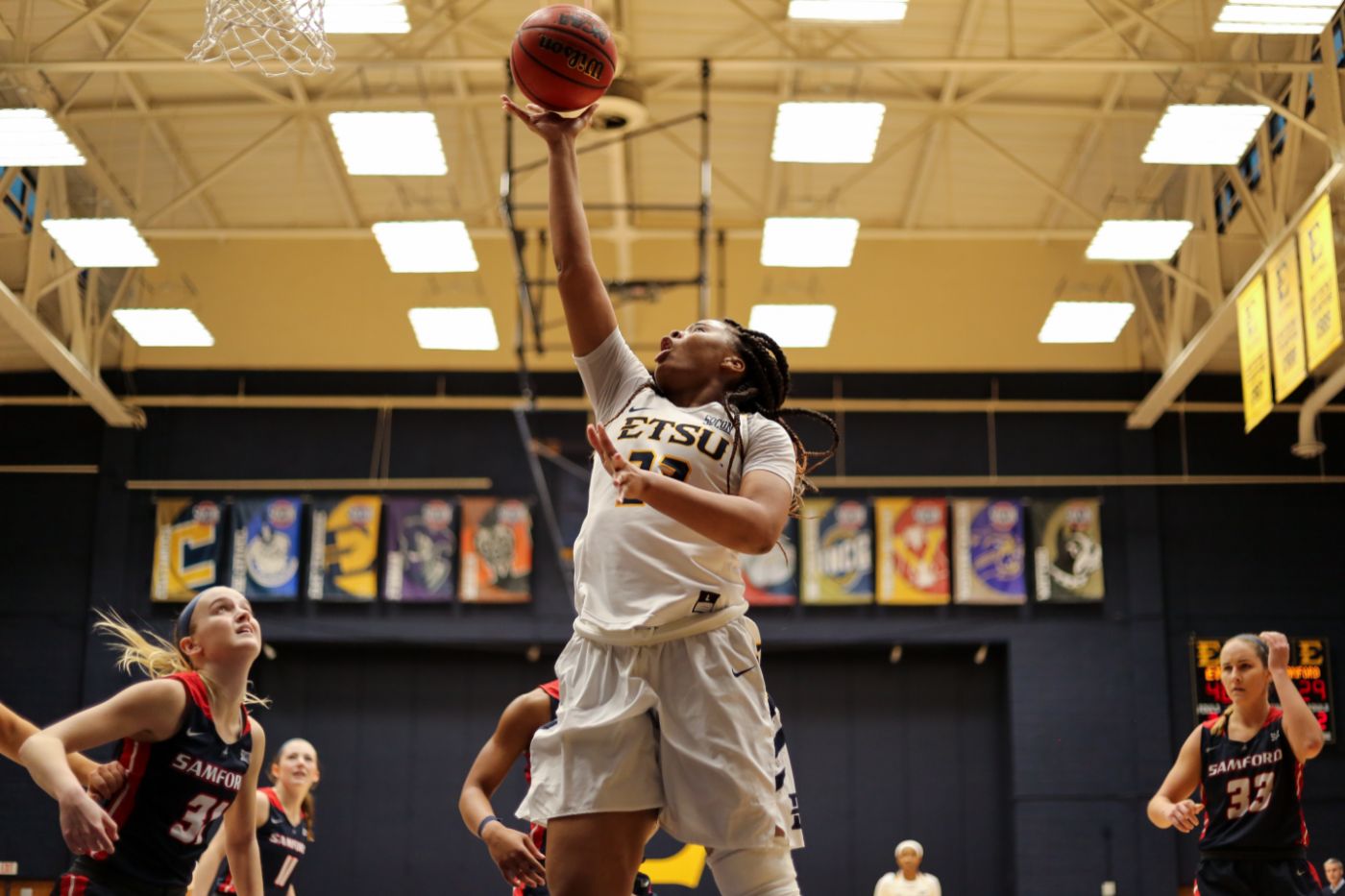 GREENSBORO, N.C. (March 2, 2019) – The ETSU women’s basketball team concluded the regular season on a high note, with a 72-67 win over UNCG on Saturday afternoon. ETSU won their last two road games and extend their win streak to three.

UNCG got things started with a layup but Snowden and Dean would give ETSU their first lead of the game with back-to-back layups for ETSU. Points traded back and forth until Scheetz drained a three followed by a Tipps layup, helping ETSU go ahead 13-8. UNCG called timeout and went on a 7-0 run to take a 15-13 lead. Snowden ended a two-minute drought with a layup to tie the game at 15 and Haynes-Overton put the Bucs ahead 17-15 with a layup. Upton made a free throw, but the Spartans tied the game at 18 with an and-one. ETSU would take a 21-18 lead after Haynes-Overton banked a three-pointer at the buzzer.

UNCG was able to take their lead back with back-to-back layups. Scheetz began a 6-0 run for the Bucs, making her second three of the game. Snowden stole the ball, drove down the court for the layup and was fouled. She put the Bucs up 27-22 with her and-one attempt. ETSU continued to control their lead as freshmen Shynia Jackson (Warner Robins, Ga.) and Upton made layups for the Bucs. UNCG did not score any field goals for five minutes, with their only points coming from free throws. They were also scoreless for the last two minutes of the quarter. Scheetz made her third triple of the game to extend ETSU’s lead to five. Snowden made one last free throw to give the Bucs a 38-32 lead at the half. Both Snowden and Scheetz led the Bucs with ten points each. ETSU also shot 50 percent from the field.

Snowden made a layup to get the Bucs on the board in the second half. UNCG made a pair of free throws to cut their deficit to six, but Snowden continued to dominate with back-to-back layups. Haynes-Overton would give ETSU a ten-point lead with her layup, forcing the Spartans to call timeout. Both teams were scoreless for two minutes coming out of the timeout. UNCG made back-to-back layups, but the Nashville duo of Upton and Haynes-Overton helped ETSU control their ten-point lead. The Spartans were strong at the free throw line, shooting 80 percent, but the Bucs held them to just 33 percent from the field. UNCG was also scoreless for the last three minutes of the quarter, as ETSU led 59-48 and shot 47 percent from the field.

UNCG scored the first five points of the quarter to come within six. ETSU did not score for the first four minutes of action, but Snowden ended their drought with a layup, reaching 20 points to record a new career-high. UNCG made back-to-back baskets to come within four. Haynes-Overton and Spears each made jumpers to give the Bucs a 65-57 lead. UNCG and Spears would go back and forth with baskets, sitting the score at 69-61. The Spartans made a layup and a pair of free throws to come within four with 10.7 seconds on the clock. Haynes-Overton was immediately fouled and made both of her free throws to give ETSU a 71-65 lead. UNCG made a layup to once again come within four. Scheetz was fouled and made one of her free throws to put the Bucs ahead by five. With 2.8 seconds on the clock, UNCG wasn’t able to score and ETSU would come away with a 72-67 victory.

“Two road wins,” said Brittney Ezell. “That’s something that’s been elusive for us all season. We got a lot of great leadership from our upperclassmen. Britney Snowden set a career-high and recorded her fourth double-double. Erica comes in with 19 points and no turnovers. Kaia played a great floor game. I could probably go up and down our roster and talk about all the contributions all the way down to Shynia, Amaya, and E’Lease coming off the bench. Lex came off the bench after battling some foul trouble and did some really good things in the paint. Like I told them coming into the game, we have to be playing our best basketball going into the tournament and I think we are. I think they’re playing well and buying into the preparation. I think our assistants are doing a really good job of scouting. I just really like our attitude and our effort right now. That’s all we can control. We’re excited to get over to Asheville.”

The Bucs will play in the 2019 Southern Conference Tournament beginning on Thursday, March 7. ETSU earned the No. 4 seed and will play Wofford, who is seeded fifth. The game will be played at 1:15 p.m.