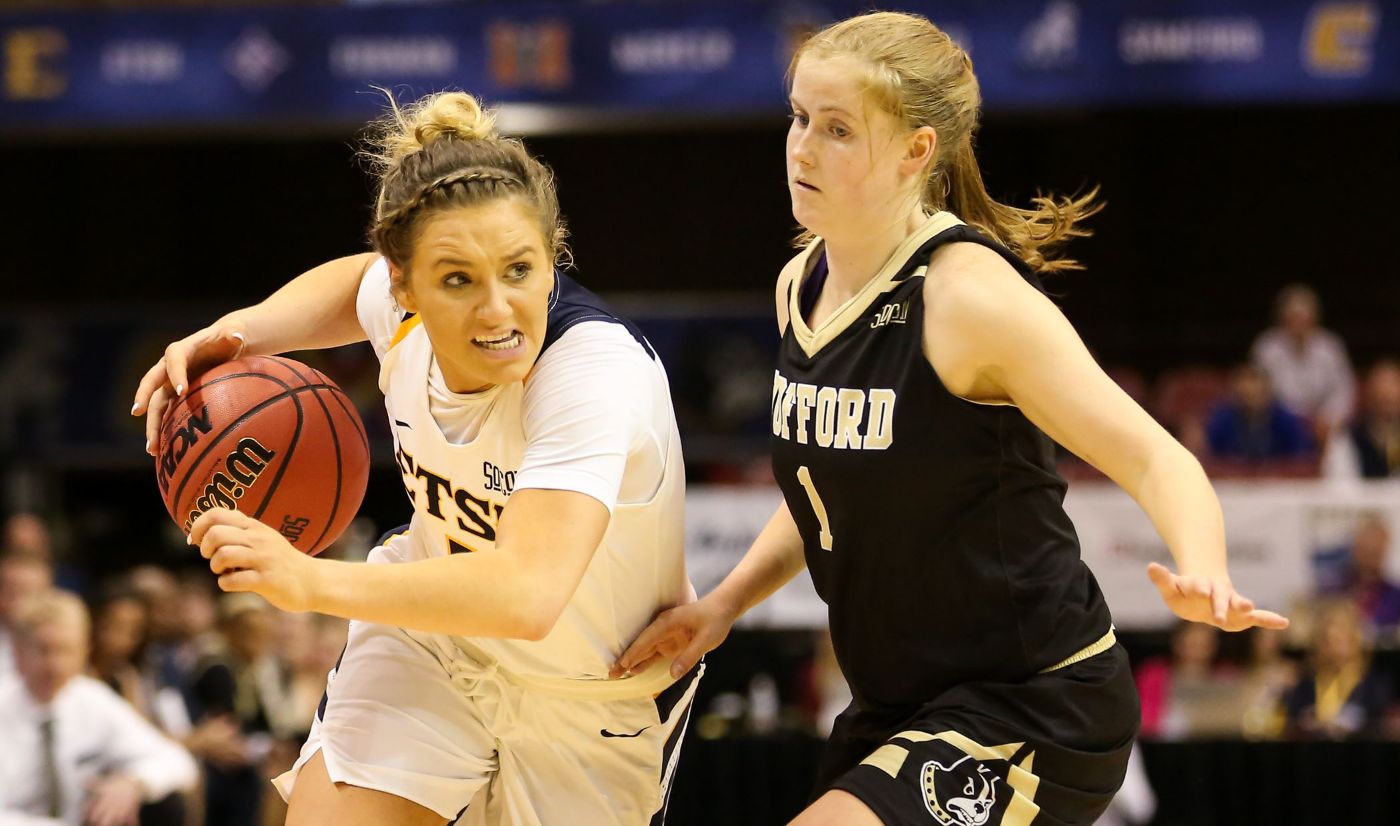 ASHEVILLE, N.C. (March 7, 2019) – It was a tale of two halves for the ETSU women’s basketball team, as the Bucs squandered a 14-point lead in the first half. The Terriers scored 50 points in the second half to defeat the Bucs 75-66 on the opening day of the Southern Conference Tournament in the U.S. Cellular Center.

ETSU finished the season with a 10-21 record and 8-6 in the conference, while Wofford improves to 16-14 overall and a 7-7 conference record.

Haynes-Overton started the game as she knows best, getting the steal and the score to put ETSU on the board first. Wofford would tie the game at two before going scoreless for five minutes. Scheetz’s three would begin a 10-0 run for ETSU, putting the Bucs up by ten. Wofford would pull within four, but Scheetz would begin another run for ETSU. Scheetz had an and-one and followed that performance with a three. Haynes-Overton’s layup put the Bucs ahead 22-10 at the end of the first quarter.

Dean started things off for ETSU in the second quarter, putting them ahead 24-10. Wofford had a 6-0 run, as the Bus were scoreless for three minutes. Lexus Spears (Jacksonville, Fla.) would end the drought, keeping ETSU ahead by ten, 26-16. Wofford drained a three and made a jumper to come within four. A free throw by Spears and a pair of free throws by Haynes-Overton helped ETSU go ahead 29-21. Wofford made a layup and Scheetz made a jumper to keep ETSU ahead by eight. The Terriers would make one last layup in the half, but the Bucs would lead 31-25.

Wofford came into the second half with a bang. Da’Ja Green swished a three and was fouled to pull the Terriers within two. Cairo Booker tied the game at 31 with a jumper. Scheetz drained her third three of the game to take the lead back, but it wouldn’t be for long, as Wofford made a jumper and a three to take their first lead of the game, 36-34. Both teams would trade points, going back and forth to stay close, until ETSU suffered a four-minute drought. Wofford ended the quarter with a 7-0 run to take a 49-41 lead.

The Terriers went ahead by ten with a jumper. Snowden’s basket and a free throw by Upton helped ETSU pull within seven. Wofford made a layup, but Haynes-Overton drained a three from deep. Upton made a pair of free throws to help ETSU come within four. Wofford began a 9-0 run with back-to-back threes, leading into a 14-2 run in three minutes. Scheetz and Snowden each scored seven points in the fourth quarter. Freshman E’Lease Stafford (Lawrence, Kan.) made a free throw, but Wofford would pull away with a 75-66 win to advance to the semifinals.

“Congratulations to Wofford. Jimmy (Garrity) has done a remarkable job, not only with this team, but with this program with the things he’s been able to do in a short amount of time. He’s a great coach. Our league got better when he came into it, so congratulations to him. They did all the things they needed to do to win the ball game. They forced us into turnovers, they hit big shots, they got a bunch of and-ones off of 3-pointers. They did a good job. We get 17 offensive rebounds, 48 total rebounds, we shoot the ball really well from the 3. The bugaboo for us has been shooting the ball from the free-throw line and then unforced turnovers. So you know just because Wofford played well doesn’t mean we played bad. Just because someone else was good doesn’t mean we were worse. You can have two really good teams and one of them just has to lose. That’s just the nature of sports. I’m really proud of our kids and the fight they’ve had throughout the season. The things that they’ve battled through, you wouldn’t believe the crap they have had to endure. Even if I told you, you’d think I was making it up. It’s amazing. And I told them before the game that they will forever have my admiration. With the schedule they’ve been through, with the work they’ve been asked to do, injuries and illness and things that go on that you will never know about because it stays in house. The things that they have to endure and I am proud of their fight, I’m proud of who they are and I’m very proud of the way they’ve represented our university. One game more and we finish second or third. But yeah, they are still my favorite people in the world and just because you lose doesn’t make you a loser.”