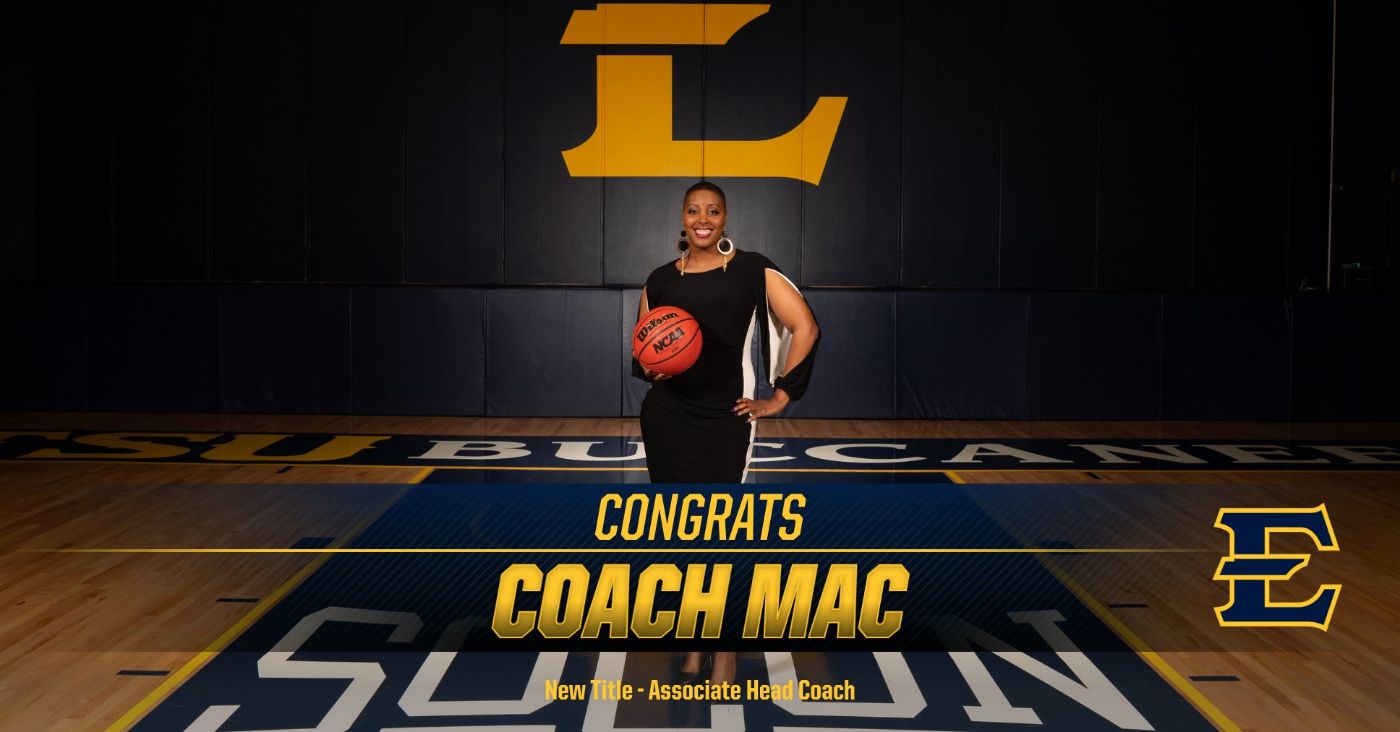 “This is in appreciation and recognition of the loyalty and hard work that Keisha McClinic has given, and will continue to give, to ETSU Women’s Basketball,” Coach Ezell said. “Keisha has done a tremendous job in assisting us define our team’s athletic identity, in motivating and monitoring individuals to academic success and in contributing to holding our program’s cultural standards to the highest levels.”

McClinic’s impact on the Bucs has been extensive since her June 2016 hiring. Under the former Murray State assistant’s watch, ETSU’s academic numbers have sparkled, turning in team grade point averages of 3.3, 3.175, and 3.00 over her first three seasons. Additionally, individual players have finished an academic year with a GPA above 3.0 nearly 30 times over that same time period.

McClinic’s impact, though, is not confined to the classroom. On the court, the Bucs have compiled a .642 conference winning percentage since the Middle Tennessee State University alum arrived in Johnson City, while snaring 13 conference honors in the same span. McClinic has also had a hand in the development of two of the most prolific players in program history – 2018 graduate Tianna Tarter and 2019 junior guard Erica Haynes-Overton (Nashville, Tenn.) – who have combined for a conference freshman of the year award, two conference defensive player of the year awards, and three first team all-conference honors in McClinic’s three years on the Buc bench.

“I am honored that Coach Ezell saw fit to name me associate head coach,” McClinic beamed. “I am grateful for the opportunity to learn from her daily and to be able to continue to grow as a professional. I want to thank her along with Athletic Director Scott Carter and President Brian Noland for this tremendous honor. I am so thankful for the people that are by my side on a daily basis - my coworkers and teammates - Kelly Mathis, Ashley Houts, Dakota Love, Autumn Lockwood, Nikki Stewart and Mandy Prusak along with our incredible roster of student-athletes. This promotion is not possible without them challenging me and lifting me up daily. I am beyond excited to be a part of this program and will work diligently to ensure that ETSU Women’s Basketball remains true to Coach Ezell’s vision of “Blue Collar, Gold Standard” in all that we do.”

McClinic’s most recent title marks a new height for her in the coaching realm, having previously served as recruiting coordinator for the aforementioned Murray State as well as Pensacola State College, also holding graduate assistant and director of operations positions at the University of Alabama at the outset of her coaching career.

“Keisha has grown in leaps and bounds since joining our program four years ago and I have no doubt that she will continue to grow as a leader, mentor and coach over the coming years with Buccaneer Basketball,” Ezell expressed. “Keisha has earned and deserves this recognition in our program and as such, let me be the first to say: congratulations Coach Mac.”

Assistant Coach Kelly Mathis: “Keisha is an extremely valuable member of our program at ETSU. She is constantly finding ways to enhance the program from skill development to building relationships across all areas of the program to recruiting.  Keisha will undoubtedly continue to work hard for our players, staff and program, and is so deserving of her new title. I look forward to growing alongside her for years to come.”

Assistant Coach Ashley Houts: “Keisha made an immediate and direct impact on me as a young professional in this industry. She has proven her commitment to this program and university through her tireless work ethic and compassion.  We are lucky to stand beside such a strong, able, talented coworker and to be able to assist in growing Coach Mac in her new role under Coach Ezell’s tutelage.”

Director of Basketball Operations Dakota Love: “Keisha McClinic epitomizes Coach Ezell’s mantra of “Blue Collar, Gold Standard”. I have had the pleasure of interacting with Coach McClinic as a student-manager, graduate assistant and in my current position. During our tenure together she has demonstrated a multitude of ways to be ETSU Tough.  Coach Mac has earned her new title through her loyalty, persistence and willingness to learn.  She embodies “Excellence Every Day”, and I could not be happier for an amazing person, mentor, friend and colleague.”