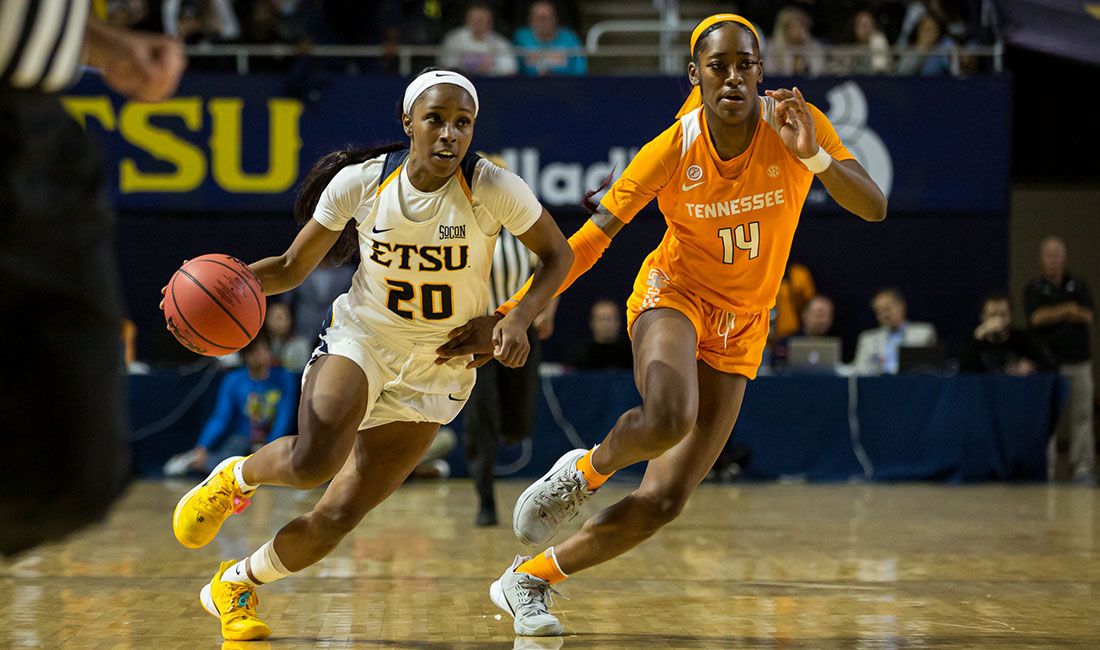 JOHNSON CITY, Tenn. (Nov. 5, 2019) - In a monumental opening night of college basketball in the state of Tennessee, 5,881 fans filled Freedom Hall in a historic showdown between the Bucs and the Lady Volunteers. Despite a career performance from Erica Haynes-Overton (Nashville, Tenn.), the Bucs took the Lady Vols to the wire in a 72-68 defeat on Tuesday evening.

Haynes-Overton opened the contest scoring the first seven points for the Bucs to take a quick 7-2 lead over the Lady Vols, extending the lead after a pair of free throws for a 10-4 lead, the largest the Bucs held over the course of the night.

Tennessee used a 13-0 run to flip the script before the Bucs slowed the bleeding with a 5-0 spurt to trail the Lady Vols 17-15. The two sides swapped buckets for the second quarter, the Bucs unable to cut the Tennessee lead to less than three to head into the half down 40-30. Haynes-Overton recorded double figures in the first half with 17, the only player on the floor to do so. Micah Scheetz (Knoxville, Tenn.) added seven to the board in the match against her hometown foe.

Tennessee outscored ETSU just 21-20 in the third quarter, the two sides giving the fans at Freedom Hall a performance to remember. The Lady Vols holding a comfortable 11 point lead heading into the final 10 minutes of the contest.

Trailing by double-digits, the Bucs grinded the score down over the course the fourth quarter and used a few momentum-changing plays to get the near capacity crowd behind the home side. With over four minutes left to play E’Lease Stafford (Lawrence, Kansas) grabbed a rebound on a diving effort and pushed it forward to Haynes-Overton for a simple layup to cut the lead to eight.

Stafford involved herself in the action just moments later as the sophomore blocked a shot on the defensive end and grabbed the rebound, finishing on the other side to trail 68-64 and sending the crowd into a frenzy. Cutting the lead to as much as two, the Bucs were unable to complete the comeback as the Lady Vols made free throws in the clutch to seal a narrow 72-68 win.

Stafford finished with a career night herself, more than doubling her previous scoring high with 13 points in the defeat while adding six rebounds. Scheetz finished with seven, as newcomer Tijuana Kimbro (Memphis, Tenn.) finished with three blocks.

The Bucs head on the road for a three-game road trip beginning with Liberty, taking on the Flames in a 5 p.m. showdown on Friday, Nov. 8th.