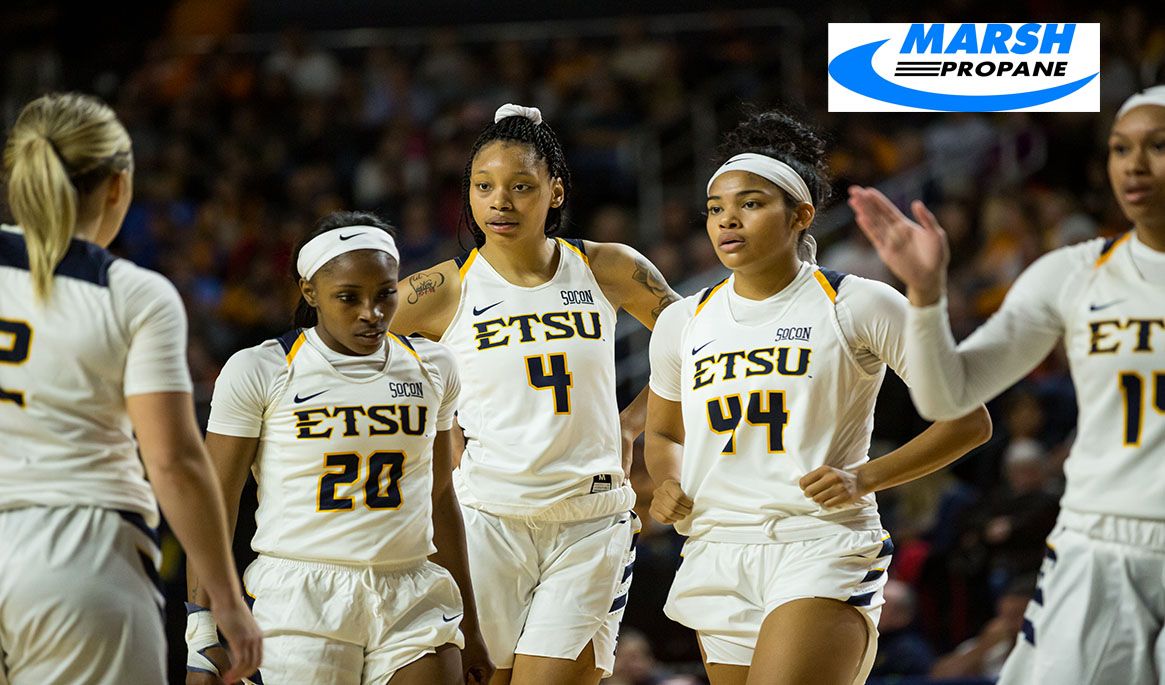 LYNCHBURG, Va. (Nov. 7, 2019) – Heading on the first road trip of the season, Brittney Ezell and her ETSU Women’s Basketball program look to build upon their thriller on opening night against Tennessee as they play visitors to the Liberty Lady Flames on Friday evening.

After an emotional and gutsy performance against the Lady Vols, the Buccaneers look to respond to their narrow 72-68 defeat in the early stages of the 2019-20 season. The Bucs return to the floor having lost five from their 2018-19 team that went 8-6 in the Southern Conference and finished third in the league, the fourth time in the last five years that ETSU logged a top-three finish in the SoCon.

Replacing those five Buccaneers no longer with the Blue and Gold are six newcomers, all standing 5’8” or taller, a welcome sight for Buc backers that saw their top four post scorers graduate. Standing the tallest amongst the group is 6’4” Hutchinson Community College transfer Tijuana Kimbro (Memphis, Tenn.), who enters the 2019-20 year as the second-tallest player in the Southern Conference.

Leading the way amongst ETSU’s nine returners are the backcourt combo of Erica Haynes-Overton (Nashville, Tenn.) and Micah Scheetz (Knoxville, Tenn.). The junior Haynes-Overton is coming off a career performance, scoring 41 points while grabbing 10 rebounds and collecting 7 steals against the SEC counterparts on opening night. Haynes-Overton has won the Southern Conference Defensive Player of the Year award each of her first two seasons in the SoCon, and she is tops amongst returners in minutes, points, rebounds, assists, steals and blocked shots. Scheetz, a redshirt junior, matched or set a new career high in scoring five different times last season during conference play alone. The duo finished the 2018-19 year as the Bucs top two scorers.

ABOUT THE LADY FLAMES

Coming off a .500 (16-16) season just a year ago, the Flames enter tomorrow’s matchup with a 1-0 mark to start the season after beating Norfolk State 67-48 on the road in their season opener. The Lady Flames open with ETSU in their 30th and final season at the Vines Center, a stadium in which appropriately opened its venue on December 7, 1990 in a contest between ETSU and Liberty. The Bucs proved victors that night in 86-74 fashion, as former Buccaneer Nicole Hopson set a record for most points ever scored by an opposing player in the Vines Center with 38, a record that holds true today.

Guiding the program for the 21st consecutive season, Liberty head coach Carey Green enters the matchup with a 457-184 mark at the helm of the Lady Flames. Green has averaged a mark of nearly 23 wins per year, finishing a season as the Big South Regular Season and Tournament Champions on 14 occasions each. The 2018-19 season proved to be only the fourth time a Carey Green coached side did not reach 20 wins.

Of the top six scorers from last year’s Lady Flames squad, five return, including the top three scorers in a team that averaged 62.3 points per game. Emily Lytle (12.4 ppg) and Bridgette Rettstatt (11.0 ppg) led last year’s team with double-digits, scoring in double-figures in their opener while getting a 19 point boost from junior guard Ashtyn Baker.

ETSU holds the advantage in the series history, winning seven of the 13 times the two sides have encountered each other. Despite the advantage, the Lady Flames have held the recent success, winning the last four matchups against the Bucs.

The two teams met last season in an offensive thriller at Brooks Gym, where the Lady Flames played spoiler to the hosting Blue and Gold by walking out with an 89-86 win. The Bucs recorded five scorers in double-figures as Lexus Spears came off the bench to lead the team with 19 points. Both Kaia Upton (Nashville, Tenn.) and Haynes-Overton finished the night with an impressive stat sheet. Upton finished with 14 points and six assists while Haynes-Overton recorded 12 points, six steals and five assists.

ETSU was projected fourth in the Southern Conference preseason coach and media polls unveiled at SoCon Media day in Asheville, North Carolina nearly one month ago. For the second consecutive season, Haynes-Overton was the lone Buc to garner preseason all-conference recognition, also claiming a spot on the All-Southern Conference first team at the end of the 2018-19 campaign.

Liberty enters their second season in the ASUN conference pegged to finish second by both the media and coaches, while Lytle and Rettstatt made appearances on the Preseason All-ASUN Team.

The Blue and Gold’s junior superstar is poised to become the 24th member of ETSU’s 1,000-point club. Entering the season, the Nashville native is just 45 points shy of reaching the milestone, currently seventh in program history in points per game average. Her mark of 41 points against Tennessee placed her four points shy of joining the prestigious 1,000 point club.

In addition to her offensive exploits, Haynes-Overton does perhaps her best work on the defensive end of the floor. The two-time defending Southern Conference Defensive Player of the Year has logged 212 steals in her career and owns the top-two single-season steal totals in the Blue and Gold record book. Haynes-Overton is only 52 swipes short of breaking Nicole Hopson’s ETSU career record of 263, and is on pace for 410 career steals, which would surpass the all-time Southern Conference mark of Appalachian State’s Anna Freeman, who recorded 383 takeaways during her four years with the Mountaineers.

Friday’s 5 p.m. tip-off at the Vines Center will be televised through ESPN+.

The broadcast team of Rett McGibbon and Kelley Deyo will lead the coverage of the 14th meeting between the Bucs and Lady Flames, with sideline reporter Emily Austen. Click here to watch.

On the radio and via streaming audio, Jay Sandos will be on the call for the Buccaneer Sports Network with the Atmos Energy Pregame Show starting at 4:30. Sandos will give a review of the Tennessee game for the Blue and Gold, preview the contest at hand and have a full breakdown of the contest with Coach Ezell. Click here to listen.