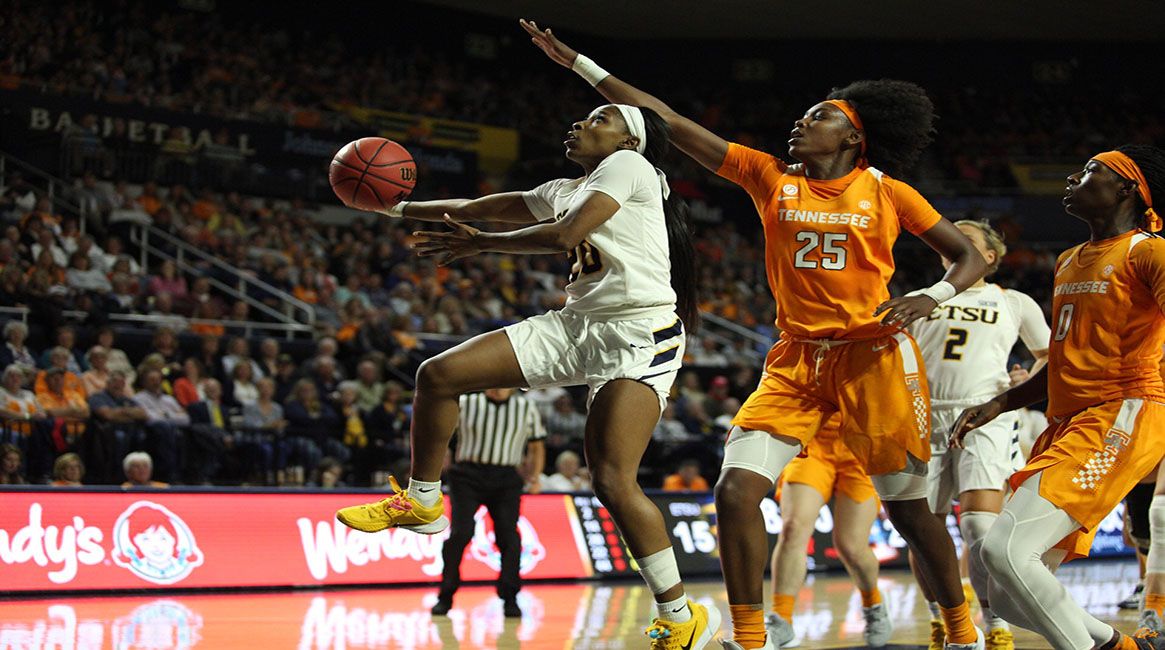 Shynia Jackson scores 10 points, including game-winner with 1.8 seconds, in the final quarter

LYNCHBURG, Va. (Nov. 8, 2019) – The ETSU women’s basketball team knocked off an 11-point deficit in the fourth quarter on their way to a 63-62 win over the Liberty Lady Flames in the Vines Center in Lynchburg, Va. on Friday evening. The come-from-behind win was sparked by 17 combined points between Erica Haynes-Overton (Nashville, Tenn.) and Shynia Jackson (Warner Robins, Ga.) in the fourth quarter as Jackson finished a feed from Haynes-Overton in the low post with 1.8 seconds to complete the dramatic comeback.

The home team opened the scoring on the first shot of the game on their way to an early 6-1 run. The Bucs found their first basket just over three minutes into the first quarter from Micah Scheetz (Knoxville, Tenn.) as the redshirt junior drained a corner three to cut into the deficit. The trey sparked a 10-0 run for the Bucs as Erica Haynes-Overton (Nashville, Tenn.) made her first three as the pair scored five points apiece during the 1:30 span. Haynes-Overton’s free-throws in that span scored her 1,000th and 1,001st career points in her career, becoming the 24th Buccaneer to achieve that mark.

Both sides struggled to get going offensively in the second, as each team made just one field goal in the opening three minutes in a defensive matchup. The Lady Flames opened up a 9-0 scoring run midway through the quarter to take a 27-21 lead over the head coach Brittney Ezell’s side. The Blue and Gold chipped away at the lead for the final three minutes, scoring the last six of eight points in the quarter to trail 29-27 heading into the break.

Liberty held a 26-15 advantage on the glass over ETSU in the first 20 minutes, only able to convert five points off their 12 offensive rebounds. The Buccaneer defense held the Lady Flames to just 34.2% (13-38) from the field, continuing their strong defensive start in the first six quarters of the season.

Trading three-point plays to begin the third, the Lady Flames made another extended run, going on a 9-0 outburst to a 43-31 lead before Haynes-Overton cut the run with two straight free-throws. Holding Liberty to just two baskets in the final five minutes of the quarter, the Bucs offense couldn’t take advantage with just one basket in their final 10 attempts of the quarter to give the hosts a 48-38 lead into the final frame.

Trading shots throughout the majority of the fourth, the Bucs made a late attempt at a comeback through the halfway mark behind five straight points from sophomore Shynia Jackson. The forward drained a tray from the wing before being the beneficiary of a beautiful assist from Haynes-Overton to cut the deficit to five.

E’Lease Stafford (Lawrence, Kansas) made it a one-possession game with a minute to go as a perfectly executed play left the sophomore in the corner wide open, having no problem knocking down the shot. The Lady Flames answered with a bucket of their own, but the ensuing possession saw Haynes-Overton bully her way into the paint, knocking down the bucket while earning a foul along the way.

Forcing back-to-back turnovers on Liberty, the Bucs received the ball with 12.7 seconds left having a chance to take the game from the Lady Flames. Kaia Upton (Nashville, Tenn.) found Haynes-Overton who carved her way into the paint. The junior went up with a shot, forcing a host of defenders to meet her. Haynes-Overton adjusted her shot and found Jackson instead, fighting off contact to lay it in with 1.8 seconds on the clock as the Bucs grabbed an evnetual 63-62 win after forcing a turnover on Liberty's final possession.

ETSU shot 19-47 (40.4%) on the night while shooting 18-24 (75%) from the line. Despite allowing 18 rebounds, the Bucs only gave up 13 points in second chance points. The Bucs held the Lady Flames to 2-17 (11.8%) from behind the arc, holding their opponents to under 40% shooting (27-68) overall for the second consecutive game to open the season. Scheetz joined Haynes-Overton and Jackson in double-digits, scoring 10 points on the night.

The Blue and Gold continue their road trip on Nov. 14 as they head to High Point to take on the Panthers in a 7 p.m. showdown.