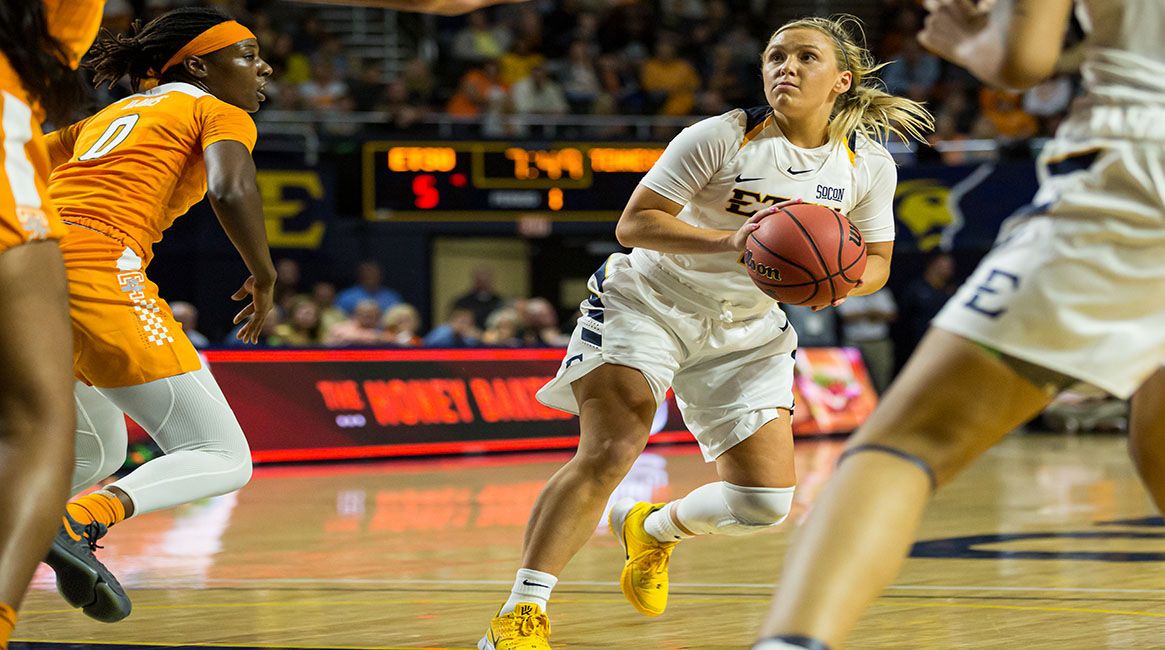 HIGH POINT, N.C. (Nov. 14, 2019) – The ETSU women’s basketball team found itself on the wrong side of a 80-62 score line in the Millis Center on Thursday evening, suffering the second loss of the season in an offensive burst from High Point.

High Point came out the gates with scores on their first three possessions to grab an early lead as the Bucs relied early on Shynia Jackson (Warner Robins, Ga.) for their offense. The sophomore grabbed the first four points for the Blue and Gold. The Panthers extended their lead on a 7-0 spurt into the opening media timeout, leading ETSU by a 15-6 score. High Point extended their lead to 10 after the first quarter, the Bucs trailing 25-15.

The Panthers kept the hot hand into the second, opening with a 10-2 run to 35-17 before Arielle Harvey (Atlanta, Ga.) knocked in her second three from the wing to cut into the lead. The Bucs used a 7-0 output, including four points from E’Lease Stafford (Lawrence, Kansas), to cut the lead back to 11 points late in the second, but the Panthers used a 44.4% rate from behind the arc to push the lead back to 15 into the break, leading 42-27.

Eight different scorers contributed in the first half, led by Erica Haynes-Overton (Nashville, Tenn.) and Harvey with six. Shynia Jackson grabbed four points and rebounds in the first half, while Tijuana Kimbro (Memphis, Tenn.) recorded one rebound short of her career-best four in just nine minutes of action. The 42 points in the first half are the most the Bucs have given up in a 20 minute period this season.

The Bucs used a couple of 5-0 spurts to put pressure on the Panthers and flirt with a single-digit deficit, but the home side managed to use their volume shooting from the three to end any threatening scoring runs on the Buccaneer side. After three quarters, the Panthers shot 13-32 from three (40.6%), almost as many as the 39 attempts from the field from the Bucs on their way to a 63-49 advantage into the final frame.

A 7-0 run from the Bucs midway through the fourth quarter cut the deficit to 10 with over four minutes to play, but High Point again had an answer for the Bucs on back-to-back possessions to increase the lead to 15 on their way to a 80-62 win.

The Bucs finished the game shooting 19-52 (36.5%) from the field. ETSU finished with a strong effort from the line, posting a 22-26 (84.6%) clip. High Point shot 29-70 (41.4%) from the field including 16-42 (38.1%) from the arc. Haynes-Overton finished as the leading scorer for ETSU with 19 points, including an 11-11 effort from the free-throw line. She added three rebounds and five steals to her stat line. Scheetz finished with a season-high 14 points, 12 of them coming in the second half. Kimbro earned a career-high eight rebounds to go with her five points.

The Blue and Gold continue their third and final game of their road trip on Nov. 18 as they head to North Carolina A&T to take on the Aggies in a 5:30 p.m. contest.