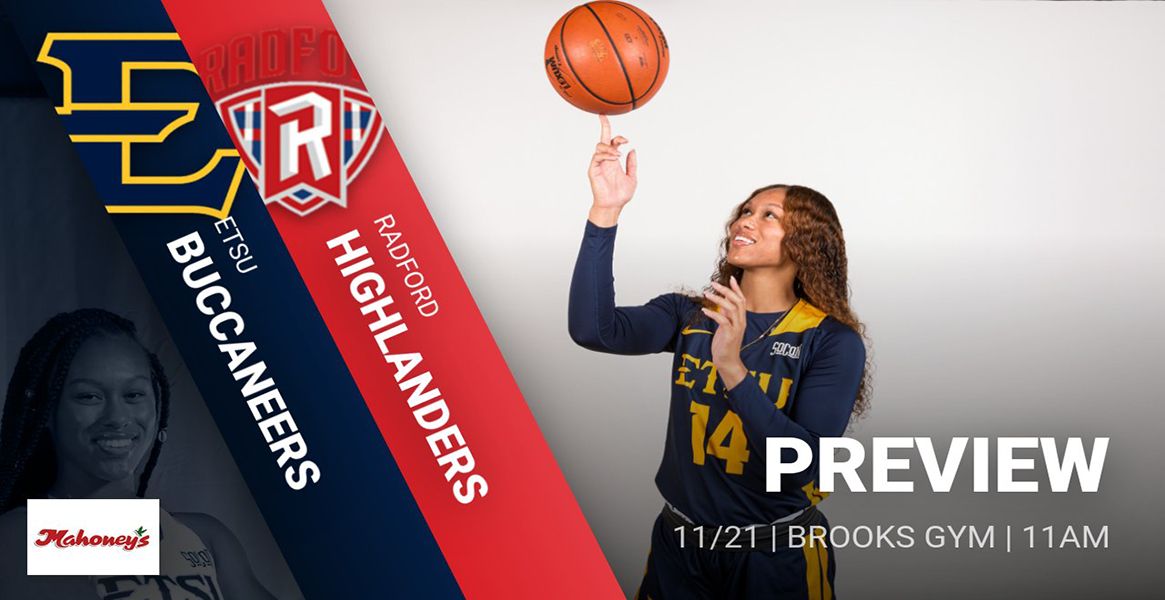 JOHNSON CITY, Tenn. (Nov. 20, 2019) – Having played seven consecutive games away from their usual home of Brooks Gym, the ETSU Women’s Basketball team lifts the lid on their 14 home games inside Brooks with their annual 11 a.m. Education Day event in which schools around the region release classes and allow students the chance to see the Bucs in action, this year’s opponent for the festivities the Radford Highlanders.

Wrapping up a three-game road swing, ETSU was at the Corbett Sports Center Monday night to take on North Carolina A&T. The Aggies, defending MEAC regular season champions, had won their last nine games at home, but fell behind in the first half to an ETSU side that was hungry to stay perfect against the hosts in the two teams series history.

Carrying a 33-25 lead into the half, the Bucs held A&T, who were without their top scorer Deja Winters, to just 32 percent from the field in the first 20 minutes, the Aggies just 2-9 from beyond the arc. But the tide shifted in half two, Cinia McCray knocking down a three on back-to-back possessions to open the half, the team going on to convert 10 of their 17 field goal attempts in the third quarter. In the frame, the Blue and Gold would be outscored 28-15, the Aggies turning an eight-point deficit into a five-point lead.

ETSU, though, was resilient, tying the game at 60 midway through the fourth quarter, but a string of nine consecutive missed free throws in the final six minutes would allow North Carolina A&T to go on a 10-0 run to break open the deadlock and build a double-digit lead before emerging victorious 80-69.

The game took nearly two-and-a-half hours as 66 combined fouls were called and 85 combined free throws were shot, the two sides also turning the ball over 48 combined times. Redshirt junior guard Micah Scheetz (Knoxville, Tenn.) would lead all scorers with 26 points, the sixth time in her young ETSU career that she has matched or set a career high, breaking her previous career high of 23 scored against Wofford in the 2019 Southern Conference postseason.

Similar to the Aggies, Radford comes into their contest with ETSU having played two Power 5 opponents and one team not likely to be up to the caliber of whom they will face in the rest of the non-conference or in league play. With lopsided losses to the SEC’s Vanderbilt and the Big 12’s West Virginia, Radford’s lone win this season came against South Carolina State, who finished No. 299 of 351 in the Division I RPI last season.

While this year may not tell much of what the Highlanders can do, again similar to the Aggies, the recent past does, as the Highlanders took their second conference regular season championship in three years last season. After going 17-1 in the Big South in the 2018-19 campaign, Radford then swept through the conference postseason, returning to the NCAA Tournament for the first time since 1996, losing to three-seed Maryland 73-51 once there.

The Highlanders lose their top two scorers and top two rebounders from last year’s team, but welcome back their leading distributor Khiana Johnson, who led the team in assists and was a double-figure scorer, as well as redshirt senior Sydney Nunley, who stands 6’4” and nearly averaged a double-double on her way to an All-Big South second team honor as a redshirt junior.

The ultra-competitive series moves into 2019 with the Bucs holding an 11-10 advantage over Radford, the two sides meeting for the first time since the 2007-08 season last year.

In the 2018 version of the Highlanders-Bucs back-and-forth, Brittney Ezell’s squad came out firing, scoring the game’s first 19 points and taking a 24-4 lead to the second quarter. Radford, though, would own the middle quarters, outscoring the Blue and Gold 58-26 in the second and third frames to take a 12-point lead to the fourth, eventually winning 79-64. Radford forced ETSU to commit 27 turnovers, the only time before Monday the Bucs had committed that many giveaways since a November 17, 2017 win over Tennessee Tech.

In the 2018 defeat, Buccaneer player-turned-graduate assistant Britney Snowden scored 18 points to lead the Bucs in scoring.

This is the second consecutive year the two sides meeting at 11 a.m. Thursday will play on an Education Day, as the game at Radford last season had a tip-off scheduled for 11 a.m. as an Education Day outing for schools localized in southwest Virginia as well. While the game would begin on time, an ice storm covered the area and closed local schools, leading to a sparse crowd at the Dedmon Center. Thursday’s game scheduled as ETSU’s annual Education Day at Brooks Gym will take place under a game time temperature of 48 degrees with plenty of sun expected in Johnson City, and a cozy and comfortable 70 degrees maintained in Brooks.

In addition to viewing the Bucs and Highlanders, the nearly 3,000 school-age children expected to attend will also tour ETSU’s athletic facilities before returning to their home schools.

Fans attended the game will need to park in Lot 22 along Go Bucs Trail and across Jack Vest Drive from the parking garage. A map can be found here.

The Buccaneer Sports Network will provide radio/streaming audio coverage, a 30-minute pregame show with play-by-play man Mike Gallagher to start at 10:30 a.m. To listen along as the Blue and Gold attempt to gain a measure of revenge on Radford for last season’s result, click here.

To purchase women’s basketball season tickets to see this year’s Bucs, ensuring a seat for each of ETSU’s 14 home games in Brooks Gym, click here.