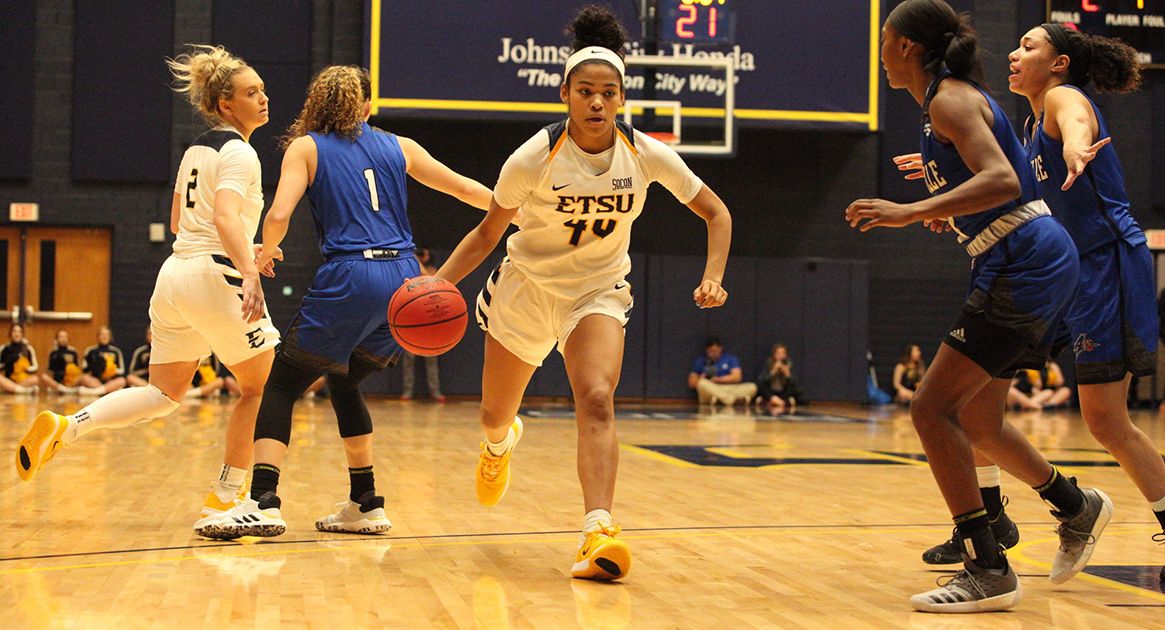 JOHNSON CITY, Tenn. (Nov. 23, 2019) – For the second time in three days, the ETSU Women’s Basketball team fell victim to a Big South opponent as UNC Asheville knocked off the Bucs in a 72-54 contest in Brooks Gym on Saturday evening.

Micah Scheetz (Knoxville, Tennessee) led the scoring for the Blue and Gold for the third-straight game as the redshirt junior finished with 14 points. E’Lease Stafford (Lawrence, Kan.) recorded her first collegiate double-double, grabbing 10 points and 10 rebounds to help pace the Bucs. Shynia Jackson finished as the final member in double-digits, scoring 11 points.

The Bucs shot a season-high 42.6% from the field, hitting 23-54 shots from the field. ETSU made 6-7 (85.7%) of their free throws while grabbing nine assists. The Bucs were outrebounded 42-27 on the glass, leading to a 27-4 advantage in second chance points from the Bulldogs.

Coming off one of their worst shooting performances of the early season shooting 15-58 from the floor, the Bucs looked to fix their woes early on in the action. Both sides traded blows early, with no team leading by more than four point at any point in the opening 10 minutes. The Bucs scored all 16 of their points from their starting five, led by Amaya Adams (Kansas City, Mo.) with five points as they trailed the Bulldogs 19-16 after the first. UNC Asheville scored 10 of their 19 points from second chance opportunities.

Trailing by four, the Bucs kept punching back after Bulldog blows to keep the contest to a one possession game into the media. Stafford knocked down a corner three to cut the deficit to one, before the first two baskets from the bench in Tijuana Kimbro (Memphis, Tenn.) and Arielle Harvey (Atlanta, Ga.) continued the pressure put on the Big South opposition. The Bulldogs used a strong shooting from behind the arc however to extend the lead to five, shooting 5-11 (45.5%) from the trey to take a 32-27 lead into the half.

Using an 11-6 run to start the third quarter, the Bulldogs extended their lead to 43-33 entering the media timeout. On the other side of the break, UNC Asheville grabbed an and-one to extending their run to a 13-2 run to establish an 18-point lead before Jackson bullied her way inside to halt the Bulldog momentum and cut the Asheville lead to 16 entering the final frame.

Jackson and Stafford took an assertive role in the early fourth and scored the first six points to cut the lead to 10, including a no-look pass from Jackson that Stafford gathered mid-air and finished with a host of Bulldogs around her. The 10-point deficit would be as close as the Bucs could muster as the Bulldogs seemingly had a response for every question asked by the Buccaneer offense. The Bulldogs forced the Bucs into three minutes without a basket towards the latter stages of the game as they’d walk away with their third ever victory in the matchup between the two, earning a 72-54 win.

The Blue and Gold are back on the road in two days, heading to Boone, N.C. to take on Appalachian State in a 6:30 p.m. tip on Monday, November 25.