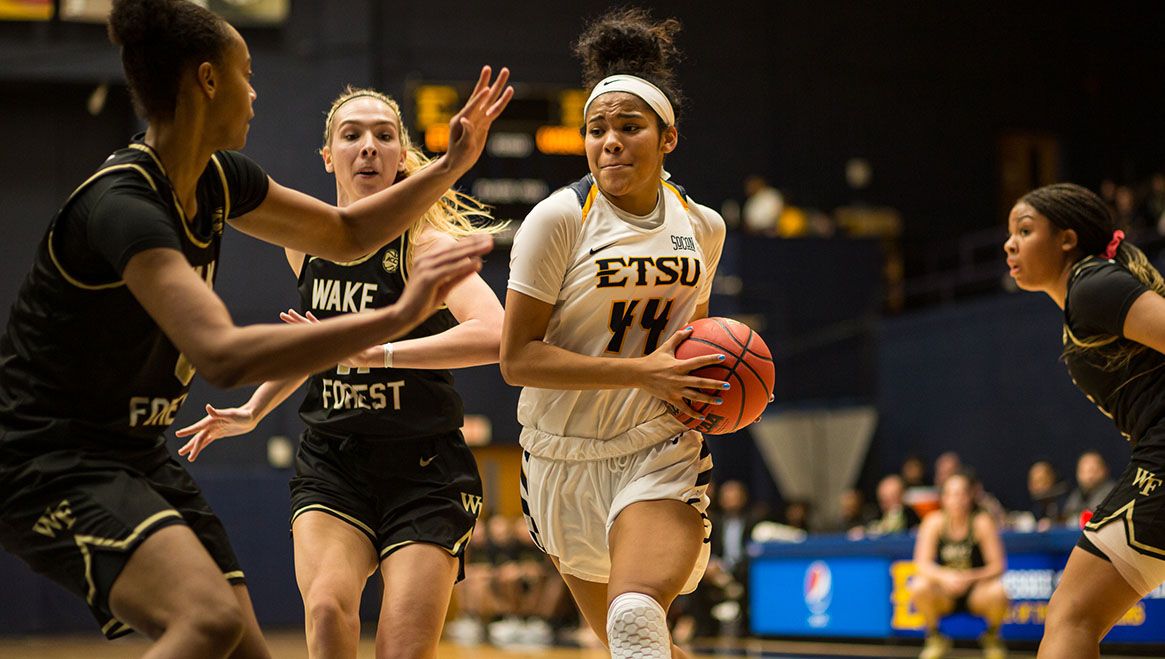 JOHNSON CITY, Tenn. (Dec. 5, 2019) – Trailing by 11 points late in the first quarter, the ETSU Women’s Basketball Team rallied to a 67-60 victory over Wake Forest on Thursday evening in Brooks Gym, marking the first time since Dec. 12, 2008 that the Bucs knocked off a Power Five program, where they were 59-50 victors at Kentucky.

ETSU moved to 3-6 on the season while Wake Forest dropped to an even 4-4 on the year.

The Bucs’ offense was paced by E’Lease Stafford (Lawrence, Kan.), who for the second time in as many games notched 16 points in a contest, a career best. Stafford added five steals on the defensive side while Micah Scheetz (Knoxville, Tenn.) finished with 16 points of her own, grabbing seven rebounds and two assists for her strong night. Tijuana Kimbro (Memphis, Tenn.) finished with her second game in double-figures, netting 10 points, seven rebounds, four steals and three blocks.

The Demon Deacons skirted out to an early advantage to open the contest, extending the lead to as much as 11 points with 30 seconds left in the opening frame as the Bucs trailed 21-10 after one.

After a fiery talk in the huddle, the Bucs came out with a point to prove, scoring the first eight points before Wake Forest needed a timeout to regroup. Stafford scored five of the eight as Scheetz added a bucket to her name as well. The Demon Deacons came out of the timeout with a turnover and the Bucs would cap off their 9-0 run with an Amaya Adams (Kansas City, Mo.) free throw before a Wake Forest layup stopped the bleeding. The teams traded blows with the lead never escaping a five-point cushion before Gabby Brown (Fort Walton Beach, Fla.) made her first bucket in the Blue and Gold to grab the first lead of the contest for ETSU at 30-29 with just under two minutes to go before half. The ACC foe eventually clawed their way back to a lead to go into the halftime break with a 33-31 advantage.

The Demon Deacons used the third quarter to try to regain control of the contest, but every time the visitors grabbed a multiple-possession advantage, the Bucs fought their way back into the contest. Up by as much as nine late in the third, Wake Forest saw their lead dwindle to six heading into the final frame.

The fourth quarter saw a 10 minute period in which the Bucs dominated, outscoring the Demon Deacons 20-7 over the course of the final quarter. After Wake Forest opened the scoring, the Bucs used a 20-2 run over the span of eight minutes to not only give the Blue and Gold a lead, but an insurmountable one at that. The Bucs led by as much as 10 in the late stages of the game as Wake Forest grabbed a consolation and-one with under 10 seconds as the Bucs grabbed their third one of the season in dramatic fashion, a 67-60 thriller. Kimbro led the Bucs in the fourth, scoring five of her 10 points while grabbing five boards, one assist, one steal and two blocks. Six different Bucs scored in the fourth and forced seven Demon Deacon turnovers in the effort.

Wake Forest was led offensively by Ivana Raca with a game-high 18 points, while Christina Morra (13) and Gina Conti (11) also finished in double digits. Wake Forest assisted on 13 of their 25 baskets, led by Conti’s six. The Demon Deacons shot 25-61 (41.0%) from the field on the afternoon, 0-13 from range.

The Blue and Gold are set to host their final of three consecutive games in Brooks Gym, hosting Cleveland State on Sunday, December 8th in a 2 p.m. tipoff time.