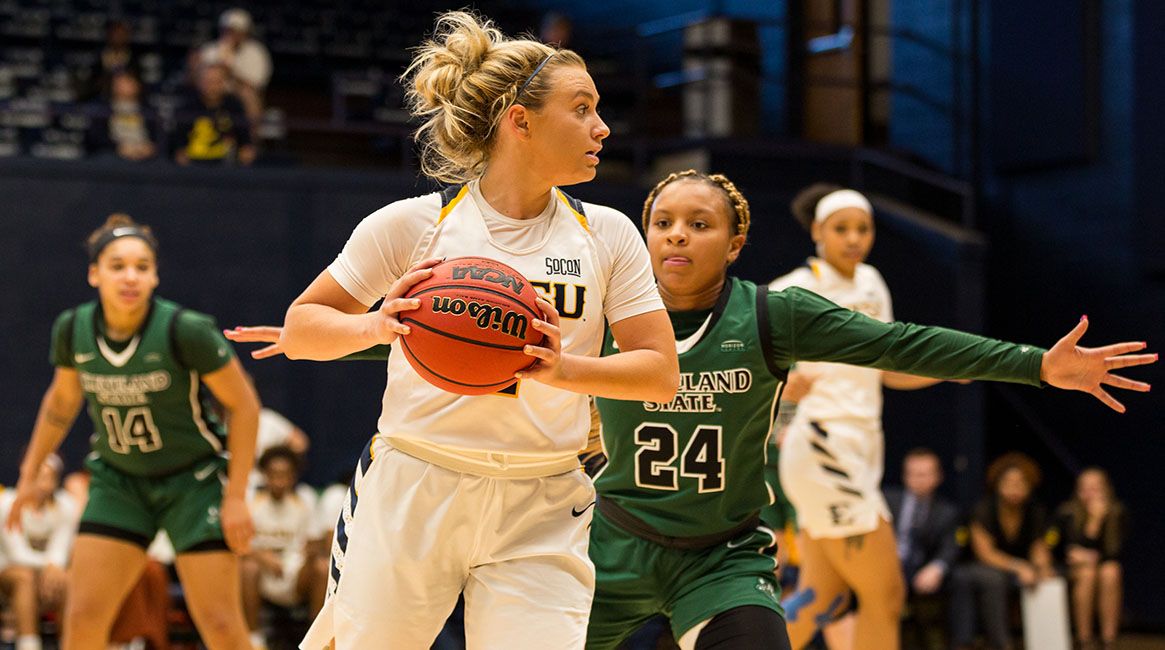 JOHNSON CITY, Tenn. (Dec. 8, 2019) – The ETSU Women’s Basketball Team suffered a hangover from their win against Wake Forest on Sunday afternoon, falling to Cleveland State 62-54 in Brooks Gym in the final of their three-game homestand.

ETSU moved to 3-7 on the season while Cleveland State improves to 8-1 on the year.

Micah Scheetz (Knoxville, Tenn.) led the Bucs in scoring for the sixth time in 10 games this season, grabbing 18 points to go along with her seven rebounds. Tijuana Kimbro (Memphis, Tenn.) scored 10 points and a team-high eight rebounds, her third straight game in double-figures. Kaia Upton (Nashville, Tenn.) added a little bit of everything, scoring five points, notching six rebounds and assists while leading the team with two steals.

After a back-and-forth two minutes to open the game, the Bucs used a 10-0 run over a three-minute span to give the home squad the early 13-6 advantage. The run was sparked by four points from Shynia Jackson (Warner Robins, Ga.) and a triple from Scheetz.

The Vikings closed the opening quarter on a 9-2 run themselves, knotting the game at 15 apiece with a three pointer from Isabelle Gradwell to send both teams into the second quarter deadlocked.

ETSU pulled even following the third quarter, outscoring Cleveland State 14-11. The Bucs held the Vikings to just 4-of-16 from the floor in the third quarter as the Buccaneer defense played a key role in knotting the contest yet again. Six different players scored in the third quarter for the Bucs, including E’Lease Stafford (Lawrence, Kan.) who got on board with four points, draining the shot at the buzzer that evened the score at 43-43.

Cleveland State used an 8-0 run in the first four minutes of the fourth quarter to pull away as the Bucs started the quarter 0-for-8, prompting an ETSU timeout with 5:49 remaining. Cleveland State opened the lead to 10 points before the Bucs clawed back with five unanswered points to trim the deficit to 54-49. Following a Viking layup, Scheetz connected for her fourth three pointer of the game to pull within 56-52. However, Cleveland State would not allow the Bucs to pull any closer, closing the game on a 6-2 run for the 62-54 victory.

Cleveland State found their rhythm offensively through Mariah Miller with a game-high 22 points and eight rebounds in 30 minutes. Mariah White joined her teammate in double-figures with 16 points and four steals. As a team, the Vikings shot 23-63 (36.5%) from the field, including a 5-20 (25.0%) rate from three, both well below their season averages. Cleveland State held an advantage in points off turnovers (13-4) and points in the paint (30-22).

The Blue and Gold head back on the road for midweek action, playing visitor to the Trojans of Troy on Wednesday, Dec. 11. Tipoff is scheduled for 1 p.m.