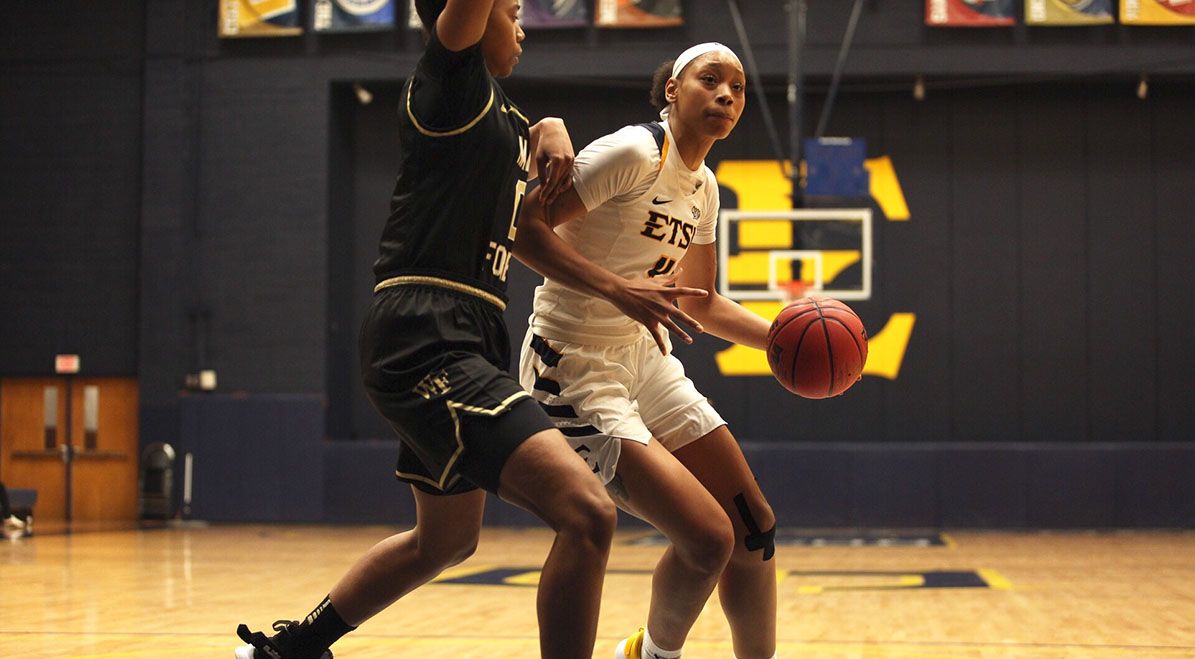 TROY, Ala. (Dec. 11, 2019) – The ETSU Women’s Basketball Team fell victims to another slow start as Troy ran out to a 79-61 win in Trojan Arena on Wednesday afternoon.

ETSU moved to 3-8 on the season while Troy improves to 6-2 on the year.

Micah Scheetz (Knoxville, Tenn.) led the Bucs in scoring for the seventh time in 11 games this season. Scheetz finished with 20 as the junior guard eclipsed the 20-point mark for the third time in the 2019-20 campaign. Tijuana Kimbro (Memphis, Tenn.) scored just two points while shattering her career-high in rebounds with 14, a team-high record on the year. Amaya Adams (Kansas City, Mo.) finished with a career-best 11 points on 2-3 shooting, while Kaia Upton (Nashville, Tenn.) was the third Buc to enter double-figures with 11 points, three assists and three steals.

Just over two and a half minutes into the contest, the Trojans came out with a 5-5 clip from the field to take a 10-0 lead, forcing the Bucs into a timeout. Troy kept pace throughout the quarter, increasing their lead to 19-7 heading into the second quarter.

After shooting just 12.5% (2-16) from the field in the first, the Bucs only managed to muster a 18.8% (3-16) rate in the second frame. The start looked promising, scoring the first five of the seven points to cut the lead back to single-digits. A 4:40 drought from the Bucs saw the Trojans burst out to a 30-12 lead, ETSU unable to stop the bleeding offensively as the home side saw their advantage to increase all the way to 22 as the two teams went into the break with a 40-22 score line in favor of the Trojans.

After falling victim to a 6-0 run to start the third, the Bucs finally found their rhythm on the offensive side of the ball. ETSU used a 7-0 burst of their own that included five free-throws. ETSU outscored Troy 20-17 over the course of the third quarter, shooting 5-9 (55.6%) from the field while making nine free throws. Six Bucs scored in the third, led by Upton with six points. Troy ended the penultimate quarter with a 57-38 lead.

Scheetz took over in the fourth quarter for the Blue and Gold, scoring 13 of the Bucs 23 points in the final frame on 5-9 shooting. Again outscoring the hosts in the fourth, the 23-22 fourth quarter output was consolation only as the Bucs were able to cut the lead to as little as 14 with just over two minutes left after Scheetz capitalized on an opportunity for a rare five-point play. The junior shimmied her way inside and fought off hard contact to draw a foul on top of her made basket to the dismay of her defender, who collected a technical foul. Scheetz finished all three free-throws but were unable to close the gap any further as the Bucs fell 79-61.

Troy proved once again why they lead the nation in rebounding, grabbing a 54-36 advantage on the glass against the Bucs. Five scorers entered double-digits for the Trojans, led by a 13 point, 12 rebound effort from Harriet Winchester. Jasmine Robinson also led with 13 points, while Japonica James led the bench scoring with 12 points and six rebounds. Troy outscored ETSU 31-8 in bench scoring as well as a 28-12 mark in fast breaks.

The Blue and Gold are back on the road for weekend action, heading to Atlanta, Ga. to take on Georgia Tech on Sunday, Dec. 15. Tipoff is scheduled for 2 p.m.