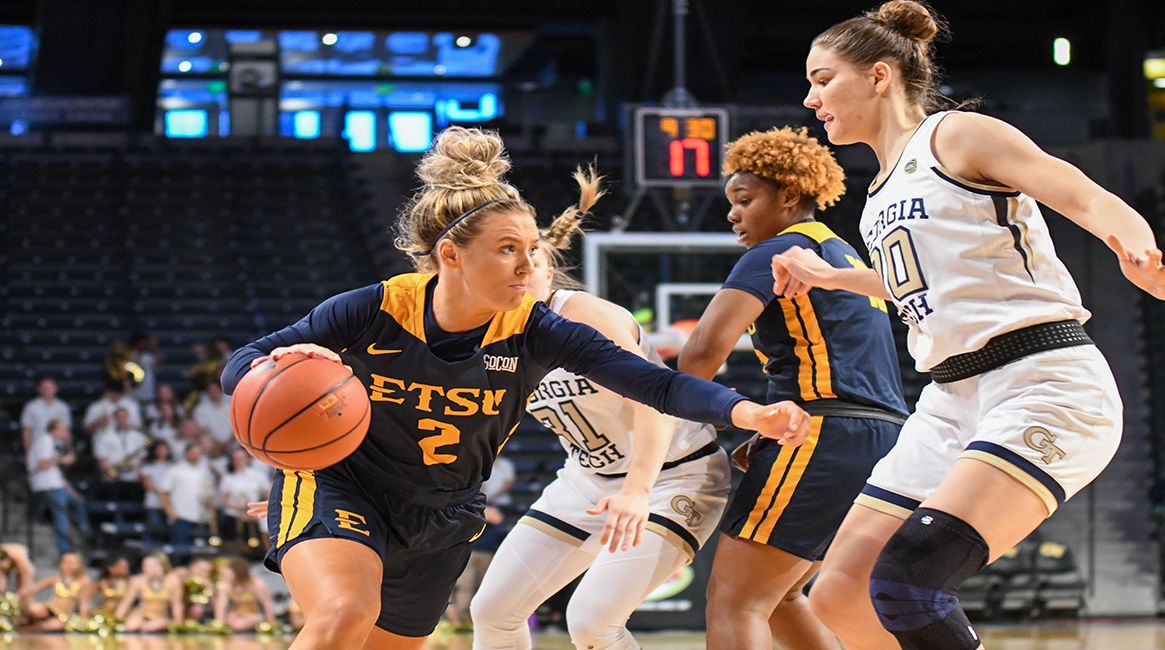 ETSU moved to 3-9 on the season while Georgia Tech improves to 8-1 on the year.

Micah Scheetz (Knoxville, Tenn.) led the Bucs in scoring for the eighth time in 12 games this season, finished with 20 for the second time in as many games and her fourth time eclipsing the 20 point mark this season. Kaia Upton (Nashville, Tenn.) finished with a season-high 13 points while grabbing four rebounds. Shynia Jackson (Warner Robins, Ga.) grabbed a team-high six rebounds in front of the Georgia native’s large support group, while Tijuana Kimbro (Memphis, Tenn.) also finished with six boards.

In the early going, the hosts powered their way to a hot start, largely in part due to the offense of Lorela Cubaj. The Yellow Jackets opened on a 12-2 run to start the game, 10 points coming from the hands of Cubaj. Georgia Tech used a 50% shooting clip in the first frame to work their way to a 22-7 lead, before Amaya Adams (Kansas City, Mo.) intercepted a pass and finished a layup as time expired to cut the deficit to 13 after the opening 10 minutes.

After shooting 50% in the first quarter, the Yellow Jackets bested their mark with a 60% shooting percentage in the second quarter. After opening up the frame with back-to-back threes, the Bucs grabbed a basket from a tough finish at the rim by Scheetz. Scheetz went on to score 10 of the 14 points for ETSU, proving to be the focal point of the offense against the nation’s best scoring defense in Georgia Tech. Despite an efficient output from the guard’s offense, the Bucs were outscored 25-14 to go into the locker room trailing 47-23.

The Bucs seemingly had no answer for the length and athleticism of the Yellow Jackets, the hosts opening the third making eight of their first 12 baskets. After being outscored 25-9 in the third, the Bucs finished the game out strong, winning the fourth quarter by a 16-15 margin. Georgia Tech continued their hot start as the Yellow Jackets bested the Bucs 87-48.

ETSU comes home for their penultimate game of 2019 when they host South Alabama on Friday, Decemeber 20th at 7p.m. in Brooks Gym. The Bucs then will have a week and a half hiatus before hosting Converse College on New Year’s Eve.