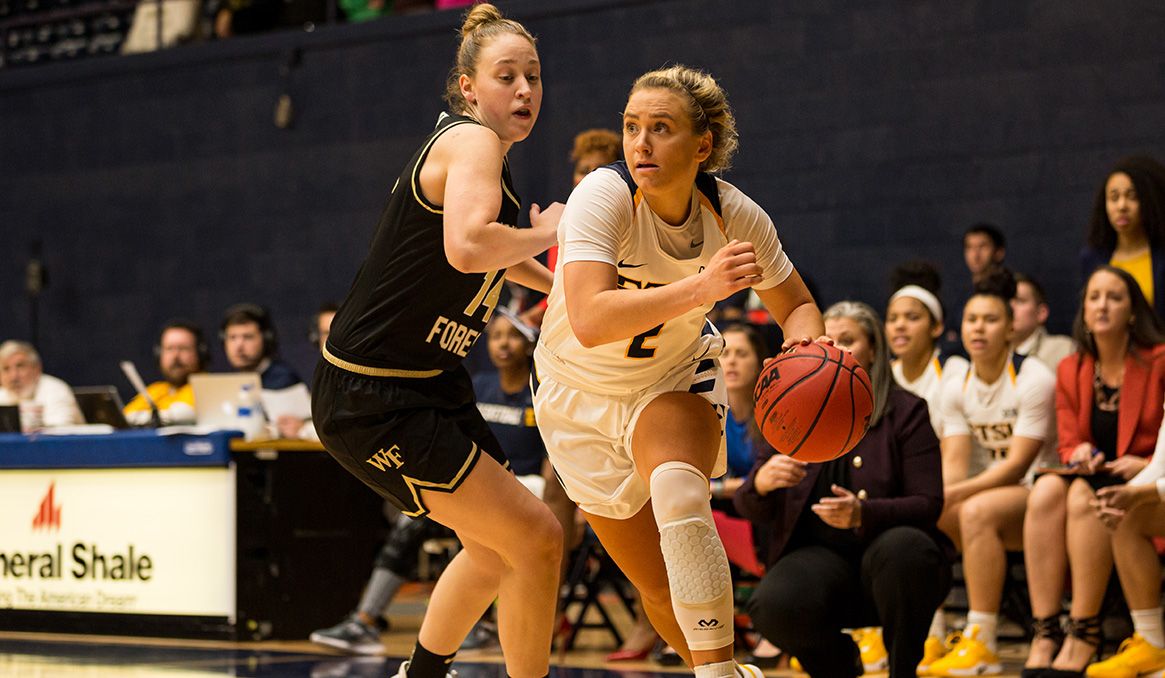 JOHNSON CITY, Tenn. (Dec. 20, 2019) – The ETSU Women’s Basketball Team moved back to winning ways on Friday evening, using strong free-throw shooting in a 65-60 win in Brooks Gym in the final game before the winter break.

The ETSU win moves their tally to 4-9 on the season while South Alabama falls to 5-7 on the year.

Micah Scheetz (Knoxville, Tenn.) led the Bucs in scoring for the ninth time in 13 games this season, finished with 20 or more points in the third consecutive game and fifth time on the season, playing all 40 minutes while finishing with a career-high 29 points. E’Lease Stafford (Lawrence, Kan.) finished the night with 14 points, while Tijuana Kimbro (Memphis, Tenn.) again flirted with her first career double-double, finishing the contest with 11 points and nine rebounds in her first start in the Blue and Gold. Kaia Upton (Nashville, Tenn.) played 36 minutes off the bench after being marked questionable with flu-like symptoms to start the day.

Both teams traded offense to start the game, moving with a consistent ebb and flow as neither side were able to grab an early advantage. The Bucs asserted themselves towards the end of the quarter, using a small 5-0 run to grab a 17-10 advantage with just under two minutes to play in the opening frame. The Jaguars knocked off the next five points to cut the deficit to two entering the break after 10 minutes.

South Alabama scored six-straight points to open the second after an initial bucket from Kimbro, quickly turning a Buccaneer lead to a two point Jaguar advantage. The Bucs responded, grabbing an 8-0 spurt of their own in just over a minute and a half behind four different scorers to take the lead quickly back to the home side. The Bucs would settle for a three-point, 32-29 advantage heading into the halftime intermission.

With four lead changes in the third quarter, both squads battled for the advantage heading into the final frame of the period. South Alabama grabbed their final lead of the game at the 2:37 mark before Kimbro tied the game on the next possession. ETSU led heading into the fourth with a slim 45-44 lead.

In an attempt to close out the game, the Bucs grabbed the first seven points of the quarter to push their lead to eight before heading into the final media timeout with a 53-46 advantage over the Jaguars. Despite only making three shots in the fourth, the Blue and Gold spent the majority of the fourth quarter at the free-throw line, using a strong 14-17 (82.4%) mark to increase their advantage by as much as 12 late on. Scheetz proved detrimental from the line, tying a program-high in free-throws made in a game as the redshirt junior finished the evening with 16-18 at the charity stripe after drawing 16 fouls. The Jaguars made a late play at a comeback bid, but the attempt fell short as they finished on a 8-1 consolation run as the Bucs finished the night with a 65-60 win in their fourth victory of the season.

The Jaguars were led with 25 points from Savannah Jones, who shot 9-21 from the field and 5-13 behind the arc. Preseason All-Conference pick Antoinette Lewis finished with just seven points and seven rebounds, well below her season averages. The Jaguars shot 22-72 (30.6%) from the field, held to just 7-31 (22.6%) from three. South Alabama dominated the glass to a 51-36 margin, including 24 offensive rebounds that lead to a 23-6 advantage in second chance points.

ETSU takes 11 days off before coming back to Brooks Gym, where they play host to Converse College in a 2 p.m. tipoff on New Year’s Eve.