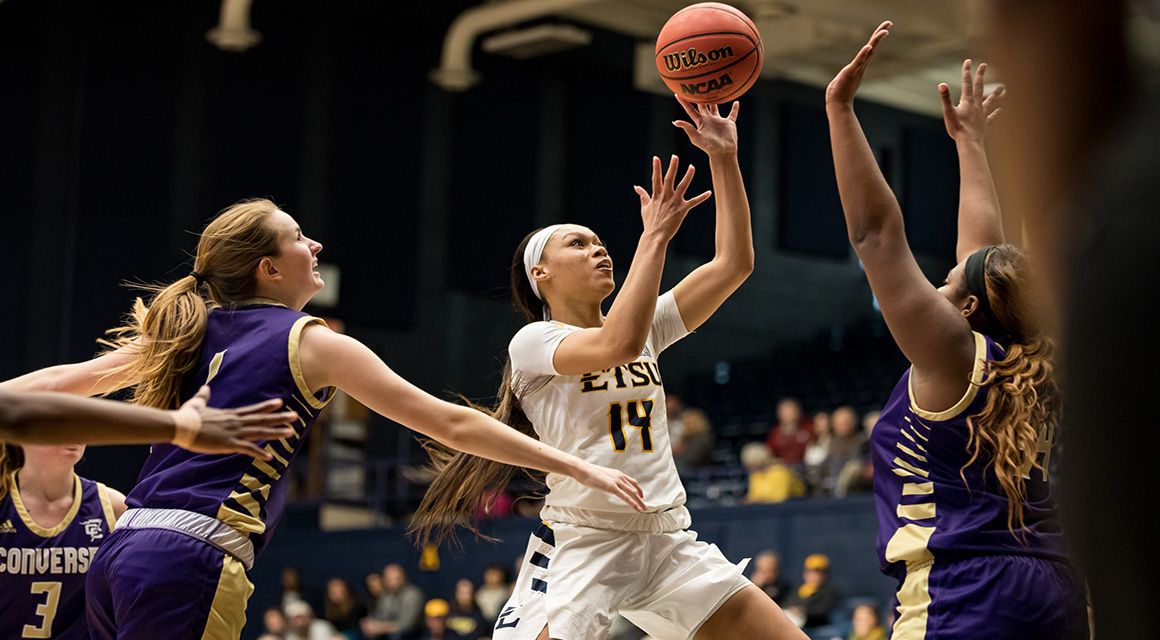 Four Bucs finish in double-figures in biggest win since 2011

JOHNSON CITY, Tenn. (Dec. 31, 2019) – ETSU women’s basketball took care of business en route to the new year, beating Converse 73-35 in the confines of Brooks Gym on Tuesday afternoon. The 38 point margin was the largest win since the Bucs returned to the SoCon and tied for the largest margin of victory since beating Mercer on January 31, 2011 by a 100-62 score.

The two-game win streak moves ETSU to 5-9 on the season as the Bucs have one final non-conference matchup before heading into SoCon play.

After a slow start in which both sides combined for 10 turnovers in the first four minutes, the Bucs found their offense. Leading 3-2, ETSU scored on seven of their next nine opportunities to increase their advantage to 20-9 after the end of the first quarter. The Bucs shot 8-13 in the frame, good for 61.5%. Six different Bucs grabbed points, led by Upton with five.

After Converse cut the lead back to single digits at 22-14, the Bucs used a 12-0 burst behind five from Scheetz to re-establish their advantage. Holding the Valkyries to just 3-13 shooting in the second, the Bucs were able to more than double up Converse as the sides entered the halftime intermission with ETSU leading 34-16. The 18 point advantage marked the largest halftime lead for the Bucs since leading Appalachian State by 10 after the first half in late November.

Exchanging baskets early on, the Bucs used a 17-0 run capped by a Perdue bucket to push the score to 53-19. ETSU forced 11 turnovers and turned it into 15 points while grabbing an 18-0 advantage in points in the paint. The 25 points marked the joint-highest the Bucs have totaled this year, scoring 25 in their fourth quarter comeback against Liberty in the second game of the year.

The Blue and Gold increased their advantage by as much as 44 in the fourth quarter, letting off the gas to coast to a 73-35 score for their second consecutive win in Brooks Gym. ETSU moves to 3-5 at home this season.

ETSU prepares to fly out as the Bucs take on Cornell on January 4th in their first game of the new year. The tipoff is scheduled for 1 p.m.