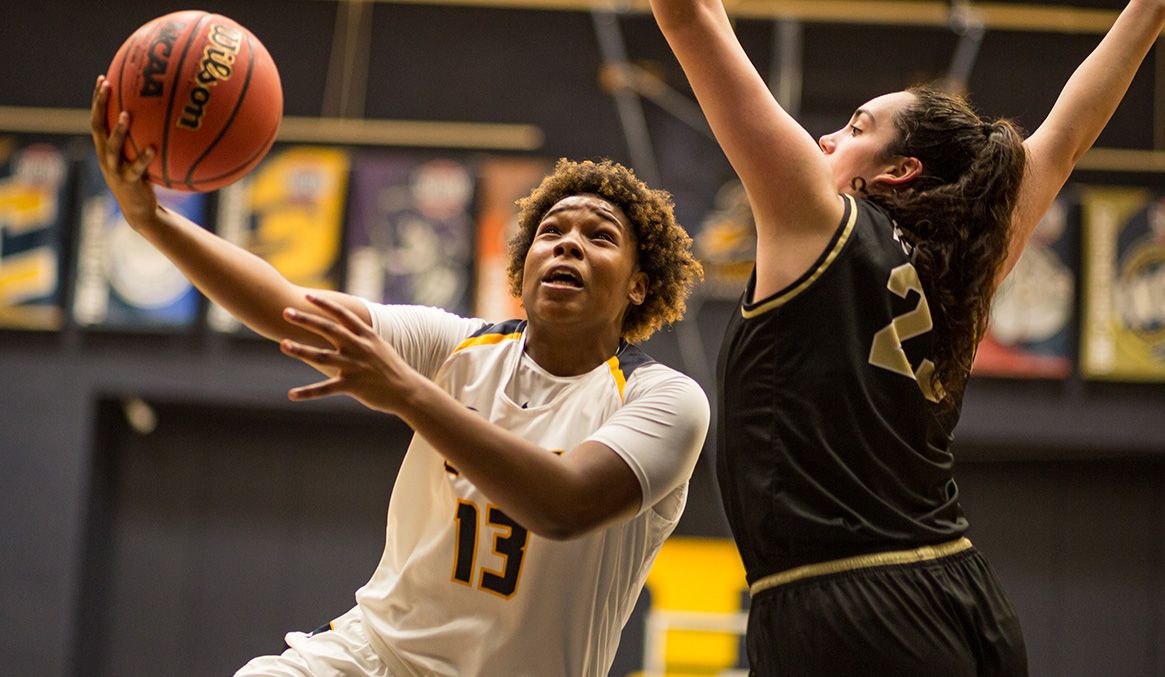 ITHACA, N.Y. (Jan. 4, 2019) – After a 10-hour trip to Ithaca, the ETSU women’s basketball team ran out of gas in the second half as they fell 71-43 to Cornell on Saturday afternoon. Trailing by three after the first half, the Bucs fell victim to a 33-9 Cornell advantage in rebounds in Newman Arena to defend their home court.

The loss ends ETSU’s two-game win streak as the Bucs fall to 5-10 on the season entering conference play. The hosts improve to 7-5 overall.

Micah Scheetz (Knoxville, Tenn.) led the Bucs in scoring for the 10th time on the season, scoring 14 points on 5-15 shooting. Shynia Jackson (Warner Dobins, Ga.) finished with 13 points and six rebounds, her fifth game in double-figures. Kaia Upton (Nashville, Tenn.) finished with five assists, her sixth time eclipsing the 5+ assist mark while leading all Bucs in dimes for the 12th time in 15 games.

Fighting through an arduous trip to New York, the Blue and Gold looked fresh to start as they shut down the Big Red offense on the first five possessions to take an early 4-0 lead. Forcing five turnovers in the first seven minutes, the Bucs used five straight points from Scheetz and a basket by Gabby Brown (Fort Walton Beach, Fla.) to grab a 15-9 lead. Fighting off a 5-0 spurt from Cornell, Jada Craig (Winston-Salem, N.C.) blew her way past her defender to grab a basket in the dying seconds of the first quarter to give ETSU a 17-14 lead, their third straight game with a lead after one quarter.

After extending their lead to 19-14 with a jumper from Jackson (8:44), ETSU fell victim to a 10-0 Cornell run that extended nearly five minutes to flip the score in favor of the hosts into the media timeout. The Big Red scored the next two points before ETSU found offense again through Jackson, who cut the streak with a trey from the wing at the 2:18 mark. Drawing a foul on the next trip down, Jackson made one-of-two free throws to continue to score all of the Buccaneer points in the second. ETSU cut the deficit to one after Jackson again grabbed a basket, being the beneficiary of a steal and assist by Craig. The Bucs would head into the half down three after a late basket by the Big Red saw them leave the court with a 28-25 lead into the intermission.

After shooting 50% in the first quarter, the Bucs fought off a 3-12 (25.0%) second quarter to keep the game within one possession. ETSU led for 11:49 of the first half and forced 11 turnovers, only able to generate seven points from them. Cornell, entering the contest with the fifth-best rebound margin in the nation, outrebounded the Bucs just 18-16 in the first half while being outscored by ETSU 5-2 in second chance points.

After the Buccaneer hot start to enter the game, Cornell took their turn to open up the second half in the same manner. The Big Red opened the third on a 7-0 run in just under 1:30 to force a timeout from ETSU head coach Brittney Ezell. Cornell capped the run with one more basket before Jackson scored her ninth straight point for the Bucs. The home side started to feel their home-court advantage, shooting 8-10 in the opening six minutes of the third to own a 46-30 lead heading into the media timeout. The Bucs held the Big Red to just three points on 1-5 shooting the rest of the way, cutting to a 49-36 deficit entering the fourth.

Scheetz opened the quarter for the Bucs, making an early trey to cut the lead to 10 just 20 seconds in. Cornell responded with 10 straight points, all but eliminating any chance at a late ETSU run. The Bucs were outscored 22-7 in the fourth, tied for a season-low for the Bucs in points in a frame.

The Big Red were led with a game-high 16 points from Laura Bagwell-Katalinich, who tallied a double-double with 10 rebounds. Samantha Widmann joined her counterpart with a double-double of her own, scoring 15 points and securing 17 rebounds. Cornell grabbed a 42-20 advantage in points in the paint as well as a 20-5 advantage in second chance points. The Big Red shot 28-65 (43.1%) from the field and 4-12 (33.3%) from behind the arc, going 11-19 (57.9%) from the free throw line.

ETSU begins conference play after finishing their non-conference schedule. The Bucs open up with UNCG, travelling to Greensboro on Jan. 9th in a 7 p.m. tip.