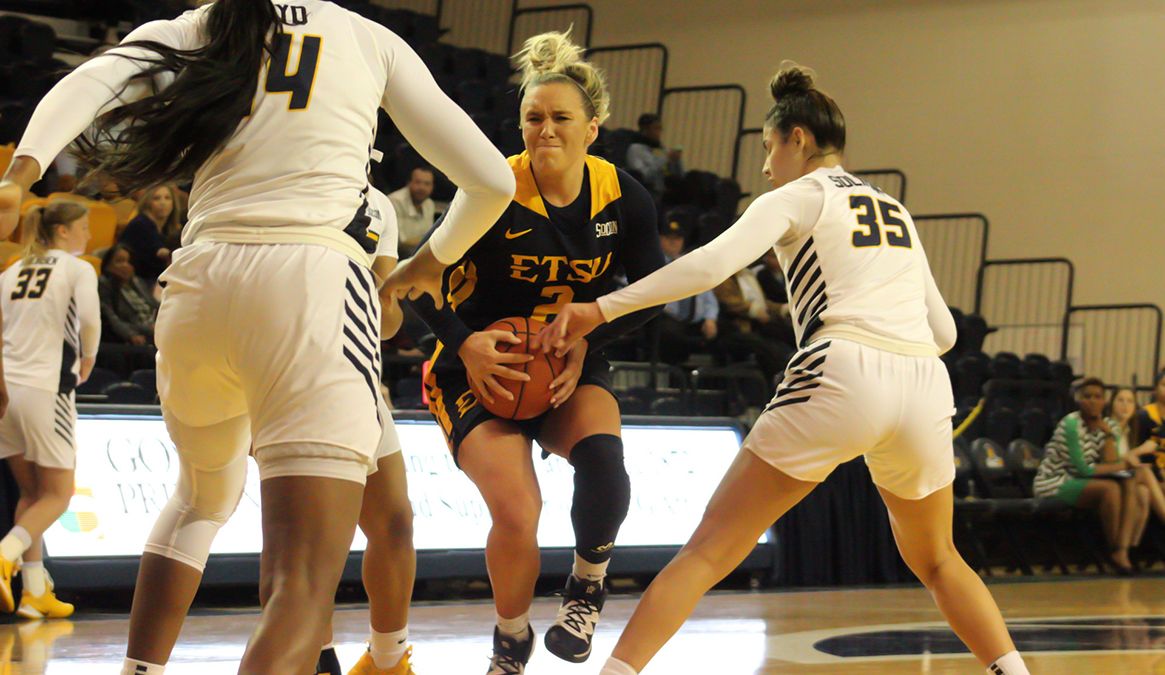 GREENSBORO, N.C. (Jan. 9, 2019) – The ETSU women’s basketball team got off to a slow start, unable to overcome an early deficit in the SoCon opener against UNCG to fall to the Spartans 63-47 in Fleming Gymnasium on Thursday evening.

After falling down 4-0 early, the Bucs grabbed their first basket off of a Kaia Upton (Nashville, Tenn.) runner in the lane to calm the Bucs. UNCG continued their hot start, entering the game 15th in the country in field goal percentage, to score the next 12 of 14 points to lead 16-4 heading into the first media timeout. Tijuana Kimbro (Memphis, Tenn.) opened the other side of the timeout by cleaning up on a loose ball to cut into the advantage. UNCG took control again as the Spartans finished the quarter with a last second layup to lead 24-10.

Chipping away into the Spartan lead over the first four minutes of the second quarter, the Bucs used an E’Lease Stafford (Lawrence, Kan.) driving layup to cut the lead to seven. As with most of the first half, everytime the Bucs probed, UNCG had an almost immediate response. The Spartans scored the next 10 points to re-establish a double-digit lead at 36-19 before Stafford once again connected, this time from range as the two teams headed into the locker room with the visitors trailing 36-22 after 20 minutes.

The Bucs shot just 10-30 (33.3%) from the field in the first half, compared to the 14-28 (50.0%) shooting from the Spartans. Ranking sixth in the country entering tonight’s game in free-throw attempts, the ETSU offense found itself unable to attempt a single free shot in the first half. UNCG’s offense remained relatively spotless, the three turnovers far below their season average of 17. Stafford led the Bucs in the first half with seven points and five rebounds.

Opening the second half, Stafford kept her hot hand going, striking true from the three point line to try and get the Bucs going. ETSU, however, found a basket hard to come by, enduring a near eight-minute drought in the third, Upton with a floater to end the 10-0 Spartan run. Despite the offensive woes, the Bucs held UNCG to a four-minute scoreless drought of their own and ended the third on an 8-0 run to cut the deficit to 46-33.

ETSU opened the fourth with an early two points from the line as Upton converted the first from the line of the evening for ETSU, extending their run. Micah Scheetz (Knoxville, Tenn.) capped off the 12-0 run with a finesse layup to cut the lead into single-digits. After an immediate response from behind the arc from the Spartans, Stafford again lit up the net from distance to answer the call and find the Bucs only down 48-40 with almost eight minutes left.

The deficit proved too much, as the Bucs looked out of gas and UNCG responded with a 9-0 run to extend the lead back to 17 into the final media timeout. The Bucs outscored the Spartans 7-6 in the final six minutes in an eventual 63-47 loss on the road to open the conference season.

For the second straight game, ETSU’s opponent provided two players that finished with a double-double. Te’Ja Twitty ended the night as a joint-top scorer with 13 points with 10 rebounds, while Aja Boyd ended her night with 12 points and 14 rebounds. Nadine Soliman, top scorer in the SoCon, finished with 13 points. UNCG finished 25-57 (43.9%) from the field while winning the turnover battle 12-20.

ETSU continues their SoCon opening road trip in Cullowhee on Saturday, taking on Western Carolina in a 2 p.m. showdown.