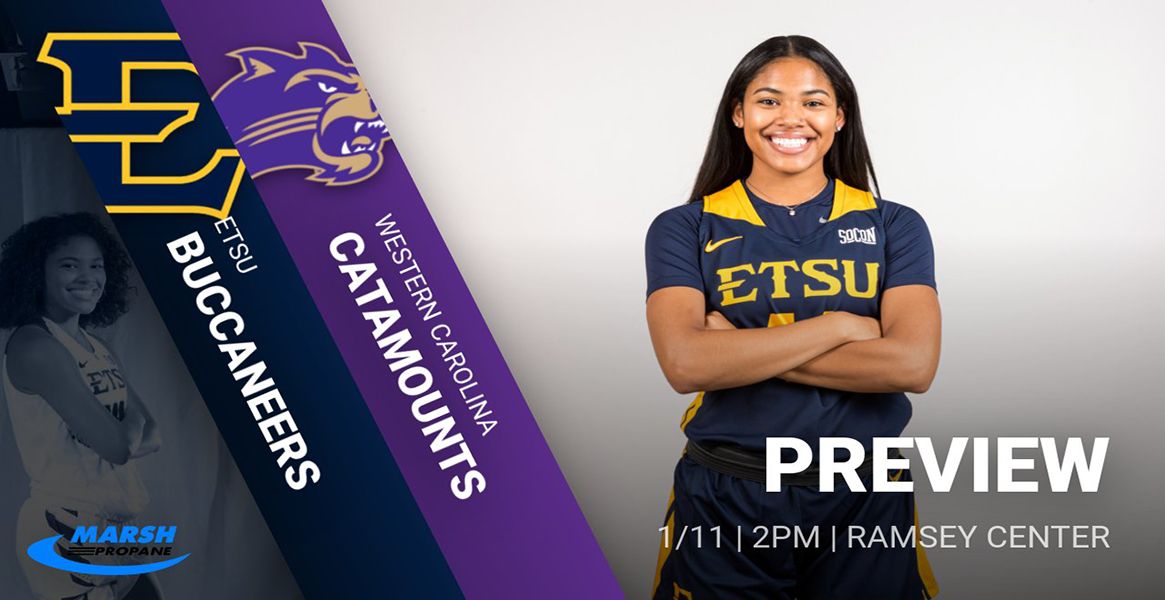 CULLOWHEE, N.C. (Jan. 10, 2020) – After stumbling in their Southern Conference opener against UNCG, ETSU Women’s Basketball returns to the floor to take on Western Carolina, a team they’ve beaten more than any other in their history.

After concluding their non-conference season with five wins, ETSU was looking to start their SoCon season on the right foot, traveling to Greensboro to take on a Spartan team off to their best 15-game start in over 20 years.

UNCG, though, would exhibit exactly why they’ve been able to have the level of success needed to start the season with 11 non-league wins, jumping out to a 16-4 lead in the first quarter while taking a 14-point lead to the second frame behind stifling defense and a balanced interior and exterior offensive presence.

The Blue and Gold would show resilience in the second quarter, scoring seven of the frame’s first nine points to cut the Spartans lead to single digits, but as was the theme of the night, UNCG had an answer, rattling off a 10-0 run before ETSU hit a three to conclude the scoring in the first half.

Faced with a 36-22 hole coming out of the locker room, the Bucs would go scoreless for nearly eight minutes after E’Lease Stafford (Lawrence, Kan.) knocked down a three 11 seconds into the third quarter, a span that may very well have sunk the hopes of other teams. The Bucs, however, were still not finished, reeling off eight straight to end the third quarter, a run that extended to 12 straight with two minutes gone in the fourth frame.

But after the lead shrank to just eight points with seven minutes and 30 seconds remaining, UNCG would seal the result with nine straight points in retaliation, once again silencing a potential Buccaneer comeback, on the way to a 63-47 win.

Redshirt junior Micah Scheetz (Knoxville, Tenn.) reached double-figure points for the 19th time in the last 20 games, while Stafford had 13 points to lead head coach Brittney Ezell’s bunch in scoring. ETSU shot 35 percent from the field, while the surprise of the night was the Bucs lack of production at the free throw line, attempting just two free throws in the first three quarters while finishing with five makes in 10 attempts from the charity stripe. The Blue and Gold were top-five in the nation in both makes and attempts entering the night.

Under first-year head coach Kiley Hill, Western Carolina has scuffled to open the 2019-20 season, picking up their lone win over a Division I opponent Dec. 4 versus Charleston Southern. The Catamounts have also beaten Southern Wesleyan and UVA-Wise to bring their win total to three on the season.

A majority of the struggles for Hill’s new team have come on the offensive side of the ball, ranking second-to-last in the Southern Conference in scoring and scoring margin. They have also failed to create easy points, while also putting their defense in uncomfortable situations, ranking last in the SoCon in steals and turnover margin.

Western’s top returner is a player the Blue and Gold know all too well, sophomore guard Jewel Smalls, who scored 32 points against ETSU in Brooks Gym last year in the Catamounts overtime loss to the Bucs. The narrow miss for Saturday’s hosts is the closest they’ve come to winning a Southern Conference game in nearly two years, entering their matchup with ETSU having lost 21 straight games in league play.

Saturday’s matchup with Western Carolina will signify the 76th clash between the Bucs and Catamounts, ETSU holding a 53-22 lead in the all-time series. The 75 times the two clubs have come together is third-most in ETSU program history, the Blue and Gold facing only Chattanooga and Appalachian State more often than Western Carolina. The Bucs 53 wins against Western is their most against any opponent, well clear of the 36 times they have beaten Appalachian State for most wins all-time against a single opponent.

The Blue and Gold’s success versus the Catamounts continued last year, Ezell & Co. beating their Saturday opponents in the aforementioned overtime contest at Brooks Gym and by 30 in Cullowhee later in the year. With the two victories, ETSU has now beaten their Blue Ridge rivals 11 times in a row, their longest active win streak against any opponent.

The Buccaneer Sports Network will carry the 2 p.m. start, along with a half-hour pregame of the contest, with host Mike Gallagher. Gallagher will look back to the Bucs matchup with UNCG, break down the meeting with the Catamounts, have a conversation with Coach Ezell and much more. Listen here.

Saturday’s 2 p.m. tip will be broadcast on ESPN3, a video stream available here.