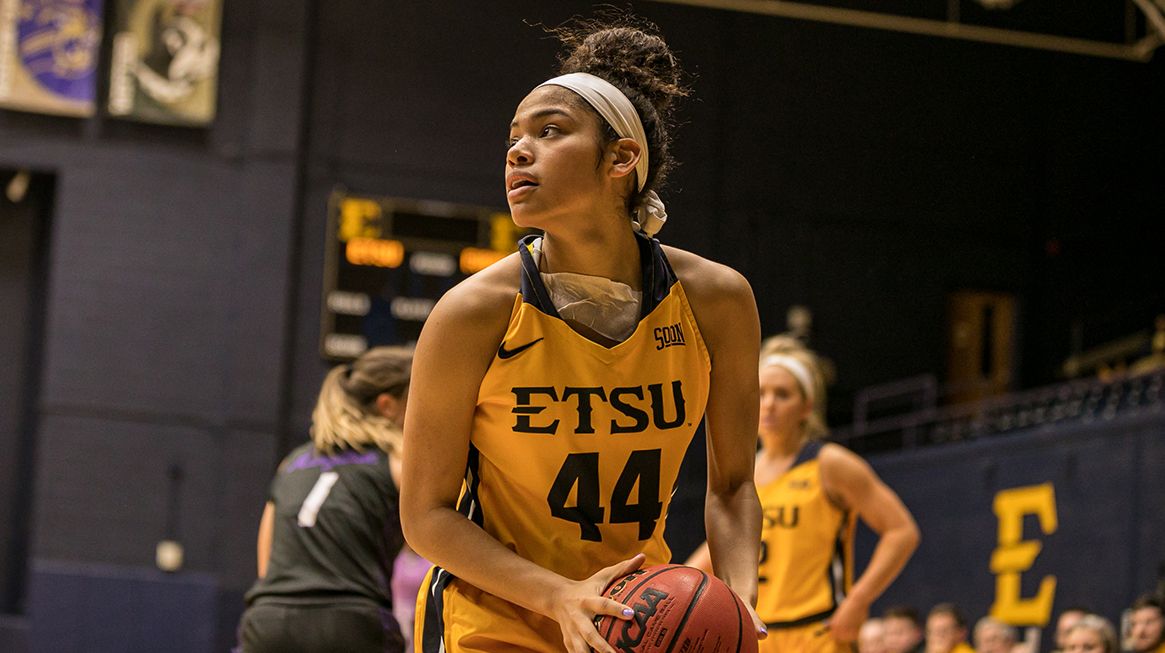 JOHNSON CITY, Tenn. (Jan. 16, 2020) – Despite a career performance from E’Lease Stafford (Lawrence, Kan.), the Bucs fell 81-62 on Gold Out night in Brooks Gym to Furman in SoCon play on Thursday evening.

Stafford, who entered the night with a career-high of 16 points, matched her mark in the opening half, scoring 16 of her 23 points in the first two quarters on only five field goals. The sophomore finished with five boards to go along with her game-best in scoring. Struggling with leg cramps late, Micah Scheetz (Knoxville, Tenn.) battled her way through the contest with 12 points, four rebounds and four assists in 35 minutes of action. Scheetz continues her double-digit scoring on the season, her 17th game in double figures on the year. Tijuana Kimbro (Memphis, Tenn.) grabbed nine points in her third start of the campaign, grabbing three blocks for the seventh time this season.

ETSU took their first lead early on as Stafford connected on a triple to put the Bucs ahead 5-4 just over two minutes into the contest. After the Paladins regained possession of the lead and extended it to as much as four, Kimbro grabbed her sixth point of the contest to see the Bucs trail 15-13 with three minutes to play in the first. Furman used buckets on four of their next five shots to help cushion their lead to go up as much as eight in the latter stages of the first before Stafford connected on two free throws to cut the score to 23-17 entering the second quarter.

The Blue and Gold went back and forth with Furman, able to cut the to three points in the early stages of the second frame. The Paladins however, answered back to extend their lead after every Buc run. Stafford continued her hot shooting in the second, scoring five straight points for the Blue and Gold to cut the Paladin advantage to 34-31. After a layup from Furman’s Celena Taborn, ETSU rattled off the last four points including another triple from Stafford as the Bucs went into the halftime locker room trailing by just one point.

Stafford went a perfect 5-5 from the field in the first half, netting all three free throws to lead all players in scoring with 16 points, tying a career-high in just 15 minutes of action. The Blue and Gold shot 12-30 (40%) from the field while shooting an 8-11 (72.7%) clip from the charity stripe in the opening half of play. The Bucs were selective on their perimeter shooting as Stafford hit all three triples for the Bucs on the team’s five attempts.

Despite the hot finish to the first half, it was the Paladins that came out firing in the third. Just over three minutes in, the visitors increased their lead to eight before Kaia Upton (Nashville, Tenn.) cut the lead with a layup in the paint. With Furman up 12 at the 2:47 mark, the Bucs rattled off eight straight points to cut the lead to 55-51 after three straight from Stafford yet again, improving on her career-night. Two Furman free throws and a basket at the end of the period put the visitors back up by eight heading into the final stanza.

A 9-1 Furman run to open the quarter all but sealed the victory for the Paladins, the Bucs unable to close within single digits the rest of the way as the Bucs fell in their opening home conference contest.

Taborn led the way offensively for the Paladins, finishing with a double-double of 15 points and 10 rebounds. Taborn was one of five players to finish in double-digits for Furman, followed by Milica Manojlovic and Sutton West with 12 points apiece. Furman’s bench outscored the Bucs’ 24-5, while the Paladins were more efficient on opportunities from turnovers, outscoring ETSU 18-11 when forcing a takeaway.

ETSU is back in Brooks Gym on Saturday afternoon, taking on the Terriers of Wofford in their second home contest of the SoCon slate. Tipoff is scheduled for 2 p.m.