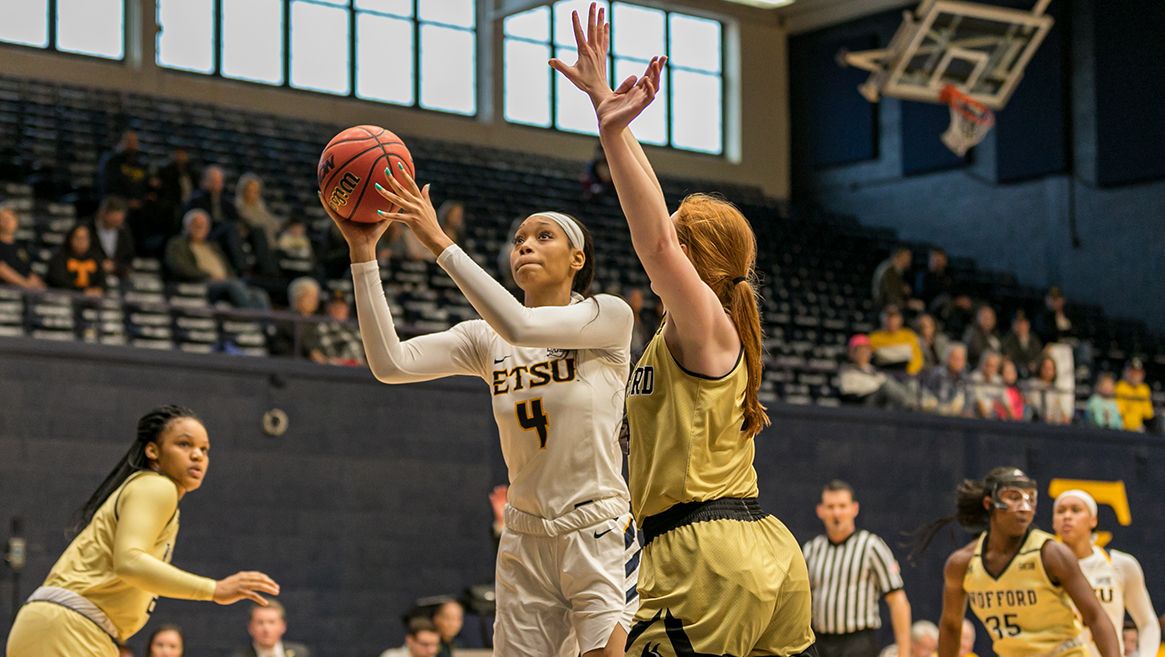 Wofford skated out to a 6-0 start to the contest before Kimbro stopped the bleeding, sparking a 4-0 solo effort to cut the deficit to two. Another six point burst for the Terriers extended their lead to eight before Scheetz grabbed a trey with 3:20 left to go in the first. Wofford ended the quarter on an 8-0 run as the Bucs saw themselves face a 20-7 deficit after just one stanza.

Back-to-back triples from Wofford with a Kimbro bucket in the middle increased the visitors advantage to 26-9. The Bucs continued to find offensive production from just Scheetz and Kimbro, who combined for 16 of the first 18 points for ETSU before Upton grabbed her fourth point on a layup with the Bucs trailing 32-20 at the 2:01 mark of the second quarter. The two teams closed with a frenzy as each side matched the other, heading into the break with the Blue and Gold trailing 37-25.

At the half, Scheetz and Kimbro combined for 18 of ETSU’s 25 points. On the glass, the Bucs held a 24-18 advantage including outrebounding the Terriers 8-5 on the offensive boards.

Wofford carried their momentum into the third quarter with three baskets in the paint in the first minute of action to stretch their lead to 18. Wofford used the third quarter to double their lead as they outscored the Bucs 20-5 in the third frame. Shooting woes and turnovers cost the Bucs in the third shooting 25% from the field (2-for-8) and had nine turnovers throughout the quarter. The Terriers capitalized, scoring six points off of the Bucs’ turnovers and shot 53.3% from the field in the quarter.

In the fourth, the Bucs found the bottom of the net first with two free throws from Jackson. The Terriers extended their lead to 30 in the middle of the fourth off of back-to-back baskets from Niyah Lutz. ETSU traded baskets throughout the fourth, losing the final frame 19-17 as the Bucs dropped their second straight at home 76-47.

Wofford’s Chloe Wanink led all scorers with 15 points including nine from beyond the arc. The Terriers converted off of ETSU’s turnovers throughout the game with 26 points coming off of ETSU turnovers. The Terriers finished 30-67 (44.8%) from the field, the conference’s best shooting team from behind the arc finishing just 6-21 (28.6%). Bench scoring for Wofford outscored the Bucs 33-15.

ETSU heads on the road to face Mercer on Thursday, Jan. 23. The Bears and Bucs face off in a 7 p.m. tipoff in Macon, Ga.