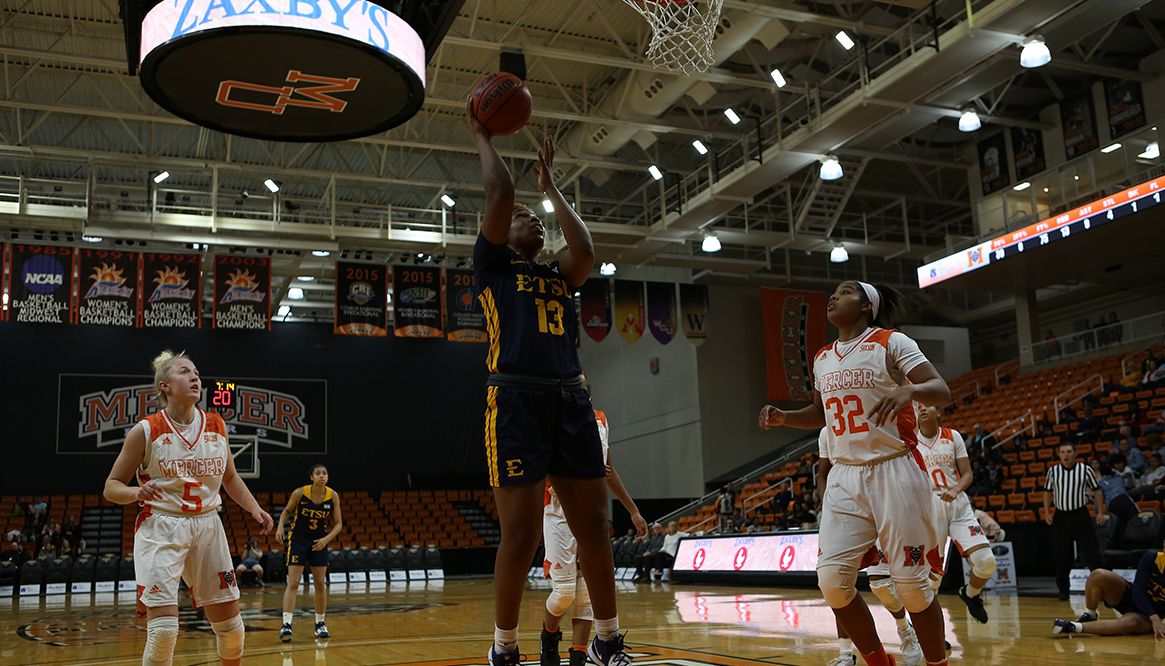 Macon, Ga. (Jan. 23, 2020) – The ETSU women’s basketball team found their offense after struggles as of late, grabbing their second game of over 70 points on the season in their 72-66 win over Mercer Thursday evening inside Hawkins Arena to break their eight-game losing streak against the Bears.

Micah Scheetz (Knoxville, Tenn.) put the Bucs up 64-57 midway through the fourth quarter with a strong post move before Mercer countered with an and-one of their own. The Bucs gave no chances for the hosts to close the gap, connecting for 8-8 from the charity stripe in the final minute to grab their second conference win of the season.

Shynia Jackson (Warner Dobins, Ga.) left her mark on the contest in a return to her home state, grabbing career-highs in points with 22 on 8-11 shooting and rebounds with 13. Her strong efforts were assisted by Scheetz, who finished the game with 18 points, 11 coming in the first half. Arielle Harvey (Atlanta, Ga.) finished with her first game in double-figures for ETSU, tallying 10 points in the win. Struggling from the field, Kaia Upton (Nashville, Tenn.) finished her evening with a career-best seven assists while knocking down four free throws in the final minute to help seal the contest.

After a strong finish underneath from Scheetz to open the contest, the Bucs countered every early shot by the hosts. Jackson secured an offensive rebound and finish to put the Bucs up 4-2, before Scheetz and Jackson again added baskets to score the first nine points for ETSU heading into the first media timeout.

A solid defensive effort saw the Bucs 2:30 scoreless drought be relatively harmless, grabbing a hook shot from Cierrah Perdue (Atlanta, Ga.) to regain the lead at 11-10. Both offenses struggled late, the Bears able to grab a 16-14 lead after quarter one.

After an opening basket by Mercer in the second, the Bucs sparked a 10-0 run to flip their four point deficit. The run started with a Gabby Brown (Fort Walton Beach, Florida) rebound and transition to find Jackson for an easy bunny. The Florida native found a reward for her assist, knocking down a trey in the corner for her first three in six games. Jackson went strong in the paint for two before Upton found Scheetz for a corner triple, forcing Mercer Head Coach Susie Gardner into a timeout with her team trailing 24-18.

The Bucs used the trifecta to continue to extend their lead, Harvey banking her first three before grabbing nothing but net on her next trip down to give ETSU a 34-23 edge. Jackson followed suit, hitting her triple as she scored the final seven points for ETSU to give the visitors a 41-29 advantage heading into the break.

The Bucs enjoyed one of their best offensive halves of the season, shooting 16-27 (59.3) from the field in the first half, including a perfect 10-10 from the three players from Georgia (Jackson, Harvey, Perdue). ETSU were unblemished from behind the arc, connecting on all six attempted triples.

Opening the second half on a 6-2 run, the Bucs forced the Bears into an early timeout to gather their bearings down 47-31. Starting out the quarter 3-4 from the field, the Bucs went 2-11 to finish the half, allowing the Bears back into the game as Mercer cut the ETSU lead 51-46 after the third.

The Blue and Gold found their offense again early in the fourth, scoring six of the first eight points to establish a nine point lead. The Bucs connected on four of their first six shots, collecting the offensive board on both misses to keep themselves separated from the Bears early on. At the 6:15 minute mark, Jackson came down for her 10th rebound to get her first double-double of her career.

The home side battled back cutting the lead to two after Amoria Neal-Tysor finished her and-one opportunity with just 5:17 to play before Jackson’s career-high 20th point gave ETSU a 61-57 lead. The Buc lead would not fall below four the rest of the way, as clutch free-throw shooting down the stretch saw the Bucs walk out of Hawkins Arena with a 72-66 road win.

In the losing effort, the Bears were led by Jaron Dougherty, who finished with 23 points. Shannon Titus and Neal-Tysor finished with 20 and 19 points respectively. Mercer shot 29-65 from the field, good for 44.6%. Hampered at the line, the Bears finished 6-13 (46.2%) from the free throw line.

ETSU continues their road trip Saturday afternoon, where they face Samford in conference action at 5:30 p.m. in the Pete Hanna Center.