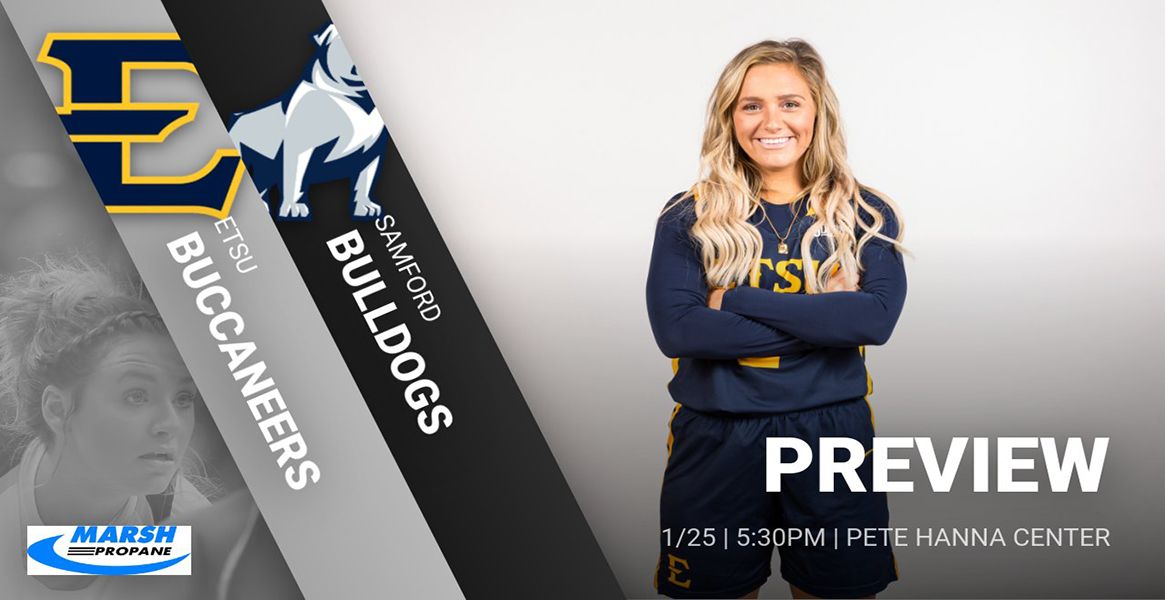 JOHNSON CITY, Tenn. (Jan. 24, 2020) – Following a triumphant victory over Mercer Thursday that snapped the Bucs eight-game losing streak versus the Bears, ETSU looks to build on their strong play Saturday against Samford as the midway point of the Southern Conference schedule approaches.

Entering Hawkins Arena Thursday evening, head coach Brittney Ezell’s squad hadn’t beaten Mercer in exactly four years, getting a game-winning three-point play from Tianna Tarter with two seconds left to snatch a 55-53 victory from the jaws of defeat on January 23, 2016. The last three times the Blue and Gold made the trip to Macon to face the two-time defending Southern Conference postseason champions, they shot a combined 30 percent from the field, scored 48 points per game and made just six combined threes in the defeats.

The Bucs first half Thursday made the struggles a distant memory.

Behind a blazing hot start from sophomore forward Shynia Jackson (Warner Robins, Ga.), who was playing just 30 minutes from her hometown and began the game by hitting all six of her shots from the field in the opening 20 minutes, the Blue and Gold amassed a 12-point halftime lead. Jackson wasn’t the only Georgian making the most of her semi-homecoming, as Atlanta natives Cierrah Perdue and Arielle Harvey each were perfect in the first half as well, the trio combining for a 10-10 start from the floor.

The opening few minutes of the second half saw play once again favor the visitors, as ETSU notched six of the quarter’s first eight points to extend the Buccaneer advantage to a game-high 16. While Mercer would mount a comeback, using a frontcourt press to force mistakes from the Bucs that led to easy baskets, the 17-4 run from the Bears would only get the game as close as three points in the final frame, Ezell’s bunch making all 11 free throws they took in the fourth quarter to seal their first win against Mercer in nine attempts.

The 72-66 victory marks the first time ETSU has scored more than 70 points against a Division I opponent this season, Jackson finishing with a career-high 22 points and 13 rebounds to pace the Bucs effort. Micah Scheetz (Knoxville, Tenn.) made her first four shots from the field on her way to 18 points, the 19th consecutive game she has scored in double-figures, while Harvey would stay flawless from the floor throughout the night, making all four of her field goal attempts to stat her first double-digit scoring game since transferring to ETSU before the season began.

After being led for 17 years by head coach Mike Morris, Samford is under new leadership for the first time since 2002, first-year head coach Carley Kuhns midway through her opening season as head of the Bulldogs following Morris’ retirement in March.

With new blood has come a new conviction and on-court product, Samford no longer the low-scoring, clock-draining group that failed to average 60 or more points per game any of Morris’ final eight seasons in charge. Contrastingly, the Bulldogs are averaging 67 points per game under Kuhns, junior center Natalie Armstrong and senior guard Sarah Myers leading the way by averaging 14 apiece.

With their newly-discovered style of play and improved offensive output, Kuhns’ crew is 3-1 in Southern Conference action, their best league start since the 2015-16 season when they won eight of their first nine SoCon games. Amongst the conference wins are double-digit successes over Wofford and Chattanooga, the 60-46 victory Thursday over the Mocs standing as the second-fewest points they’ve allowed this year.

Saturday will be the 13th time Samford and ETSU have mixed things up, the two teams splitting the previous 12 matchups down the middle.

The last collision between the Bucs and Bulldogs was senior day at Brooks Gym 11 months ago, onlookers celebrating Raven Dean, Britney Snowden, Lexus Spears and Sadasia Tipps in their final home game of the 2018-19 season. While the pregame recognition would give way to the game, the celebration would continue throughout the 40 minutes of play for ETSU, outscoring Samford 42-17 in the middle two quarters of the contest on their way to a 71-50 win. Four Buccaneers would score in double-figures, while the hosts would dominate the paint, racking up 52 points down low while Samford mustered only 24.