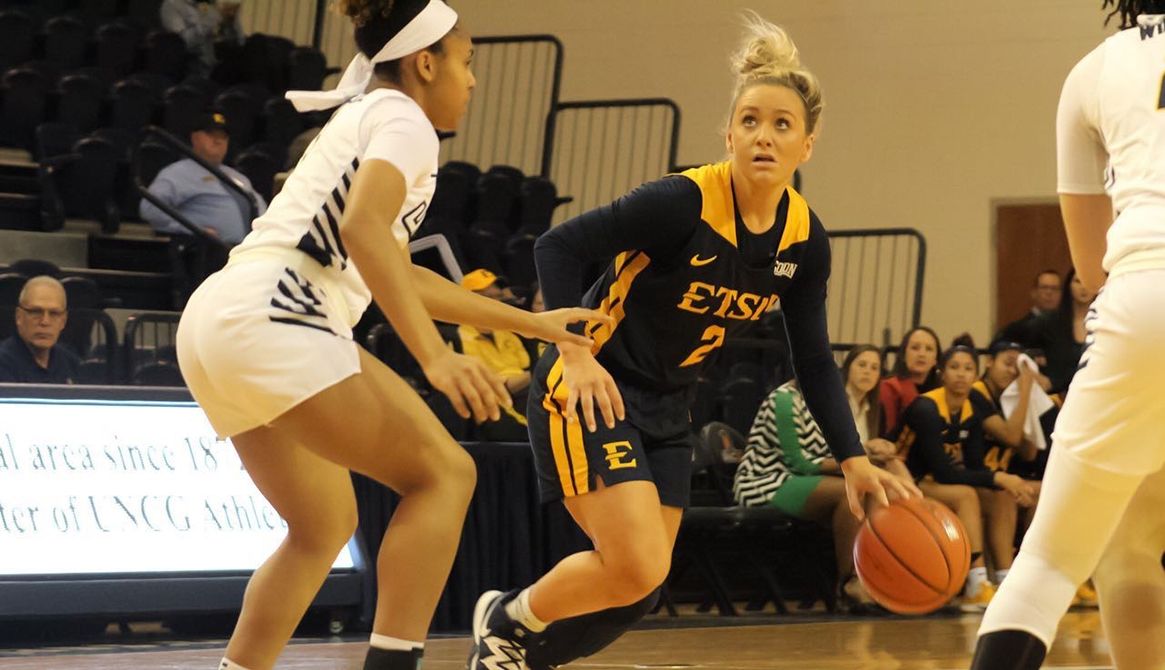 HOMEWOOD, Ala. (Jan. 25, 2020) – The ETSU women’s basketball team suffered a hangover from their win against Mercer two days ago, falling to Samford 68-34 in SoCon action at the Pete Hanna Center Saturday afternoon.

The Bucs were led in scoring by Micah Scheetz (Knoxville, Tenn.), scoring 10 points for her 20th consecutive game in double-digits. E’Lease Stafford (Lawrence, Kan.) finished with seven points, all coming in the first half. Kaia Upton (Nashville, Tenn.) ended with six points and five rebounds, while Tijuana Kimbro (Memphis, Tenn.) led the Bucs with 10 rebounds. The Bucs shot 15-57 (26.3%) from the field and just 1-17 (5.9%) from behind the arc. ETSU’s three assists mark a season-low. The Bucs grabbed 40 rebounds, slightly edged by the Bulldogs 45. It marks the second time this season the Bucs grabbed at least 40 boards.

As both sides struggled offensively in the early going, the Bucs snapped their 4+ minute scoring drought with a jumper from Scheetz to give ETSU a 7-5 lead at the 2:57 mark. The Bucs’ 2-9 start from the field was countered with a strong defensive effort, only allowing two buckets on the first 12 Bulldog attempts. The Bucs would hold that lead until a late and-one in the first quarter saw Samford exit the first stanza up 8-7. The two sides were a combined 6-30 from the field in the opening quarter.

Despite their good defensive record in the opening quarter, the Bucs fell victim to a 7-0 outburst to start the second, forcing ETSU Head Coach Brittney Ezell into a timeout with her team trailing 15-7. Jada Craig (Winston-Salem, N.C.) found a path through the lane to cut the drought before forcing a turnover on the other end.

The hosts gradually built their lead to as much as 13 at 29-16 before Scheetz beat the shot clock buzzer on an off-balance shot and then led and finished a fast break to cut the deficit to 29-20 to enter the halftime intermission.

ETSU shot 46.2% (6-13) from the field in the second quarter but were hindered by seven turnovers, helping the hosts enjoy a near double-digit lead after two quarters.

The Blue and Gold were unable to get things going on the offensive side of the ball as play resumed, Scheetz picking up where she left off with some crafty handles and a finish to grab the first ETSU bucket at the 5:18 mark of the third. Samford, however, were able to capitalize with back-to-back threes following the Scheetz basket as the Bulldogs started the half on an 11-2 run before Scheetz once again found the bottom of the net. The hosts propelled to a 21-7 third quarter to seemingly put the game out of reach heading into the final 10 minutes.

Amaya Adams (Kansas City, Mo.) scored the first five points in the fourth quarter before Upton knocked down a floater, but the Bucs were unable to sustain the offense as Samford walked out with their third straight conference win in 68-34 fashion.

The Bulldogs were led by 14 points from Natalie Armstong, while Paige Serup finished with 12. Sarah Myers rounded out the Bulldog scorers with double-digits, scoring 11 points. Samford shot 27-67 (40.3%), outscoring the Bucs inside the paint (32-18) and off the bench (20-7).

ETSU return to the confines of Brooks Gym next Saturday, taking on their in-state rivals Chattanooga in a 1 p.m. showdown.