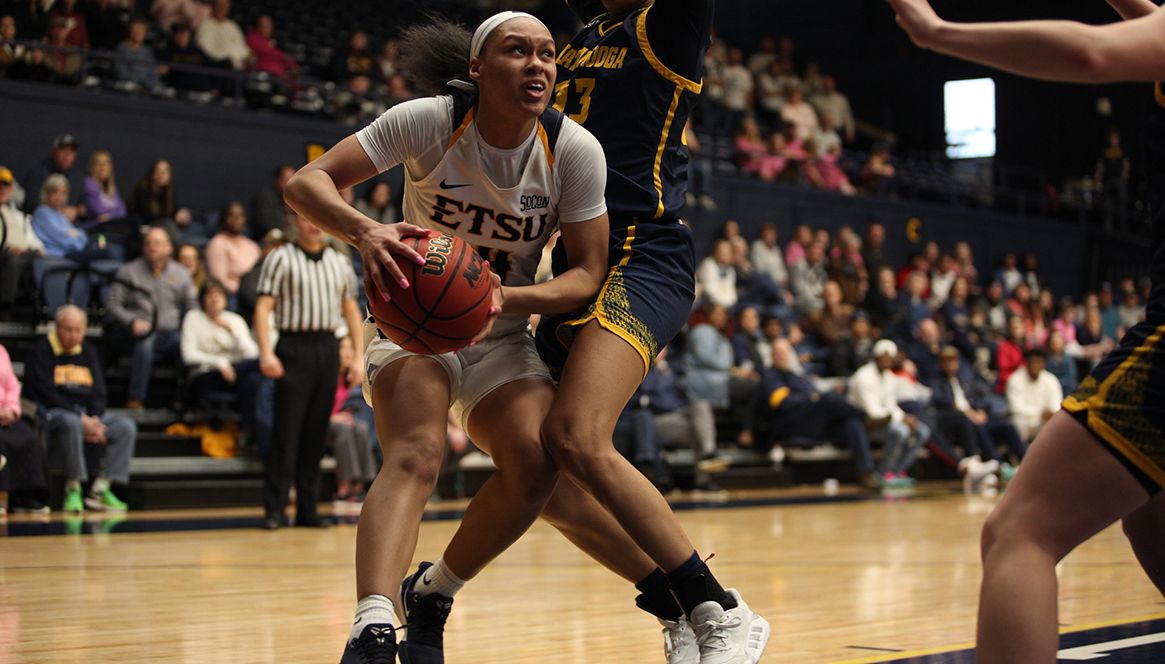 JOHNSON CITY, Tenn. (Feb. 1, 2020) – In a battle for the ages, ETSU’s afternoon can be summed up in the same manner of Micah Scheetz’s (Knoxville, Tenn.) potential game-winner in regulation. As close as it gets. The redshirt-junior’s shot touched every part of the rim and hit the backboard before bouncing out as the Bucs eventually fell short in three overtimes, falling 91-82 against Chattanooga on Saturday.

The team played exactly how head coach Brittney Ezell expects them to: with grit and with heart. After three foul outs and an injury, the Bucs had five eligible players finish the game, running on fumes as the Bucs fell 13-4 in the final overtime period. Both Scheetz and Kaia Upton (Nashville, Tenn.) finished the game playing at least 54 minutes, Upton playing all 55 in the contest.

With Scheetz’s game-winner just rimming out, the Bucs headed to their first overtime game of the season. The Bucs opened with back-to-back baskets, countered each time by a Moc bucket of their own. ETSU eventually trailed by one before a huge triple from E’Lease Stafford (Lawrence, Kan.) connected from the wing with 24 seconds left to take a two-point lead. After the Chattanooga timeout, Stafford fouled a wide-open cutter to try and force Eboni Williams to make her shots from the line, fouling the sophomore from Lawrence out of the ball game. Williams made her ensuing free throws, eventually sending the game to a second overtime.

UTC cashed in on the early portion of the second stanza of extra time, earning an and-one opportunity just 12 seconds into the period. Shynia Jackson (Warner Dobins, Ga.) made no haste to tie the game up, hitting a trey to put the score back level at 71 apiece. Scheetz finished the scoring with three free throws to tie the game once again at 78-78 before Williams’ last second shot fell short to head to the third overtime.

The third overtime became only the second time in program history that the Bucs played a third frame of extra time, their only other time coming from a 4OT loss to Georgia Southern, 104-101 on January 12, 1998. Jackson committed her fifth foul early on in the period, giving the Bucs only one forward on their roster eligible and depleting their bench completely. The Mocs took advantage and ran out to a 9-2 run that ETSU could not come back from. Chattanooga finished the game outscoring the Bucs 13-4 in the third overtime, coming away with a 91-82 road win.

With the two sides combining for an average of just over 110 points per game, the first quarter was anything but a defensive struggle. With the score 13-11 in favor of the visitors with 3:57 left in the quarter, ETSU fell victim to a quick 9-2 run by the Mocs before scoring the final three points of the quarter to cut the deficit to 22-16 after one stanza.

The Bucs needed less than two minutes to close the gap to just two points, opening the scoring with a Stafford triple before Jackson recorded four straight points to trail 25-23. However, the Mocs answered the call, hitting their next two shots to extend the lead back to six. Chattanooga created at least a two possession gap the last five minutes of the half, entering the locker rooms up six points on the Bucs at 34-28.

Stafford and Scheetz combined for 16 points on 7-15 shooting in the opening half, the Bucs knocking down 12-27 shots from the field for 44.4%. ETSU assisted on eight of the 12 made baskets, Scheetz and Upton each recording three.

The defensive effort from the Bucs paid off in the second half, forcing 12 of the 19 Moc turnovers in the final two quarters. ETSU held the Mocs to just 9-29 from the field in the second half, able to turn their six-point deficit into a tie ball game to give themselves the ball with the final possession to try and win the game.

Williams led all scorers with a game-high 25 points, adding 16 rebounds, seven coming from the offensive side of the ball. Bria Dial finished with 21 points on 14 attempts, Abbey Cornelius also adding a double-double of 18 points and 13 rebounds. Lakelyn Bouldin finished in double-digits as well, adding 13 points.

The Blue and Gold return to Brooks Gym next Thursday, hosting Western Carolina in midweek action with tipoff scheduled for 7 p.m.