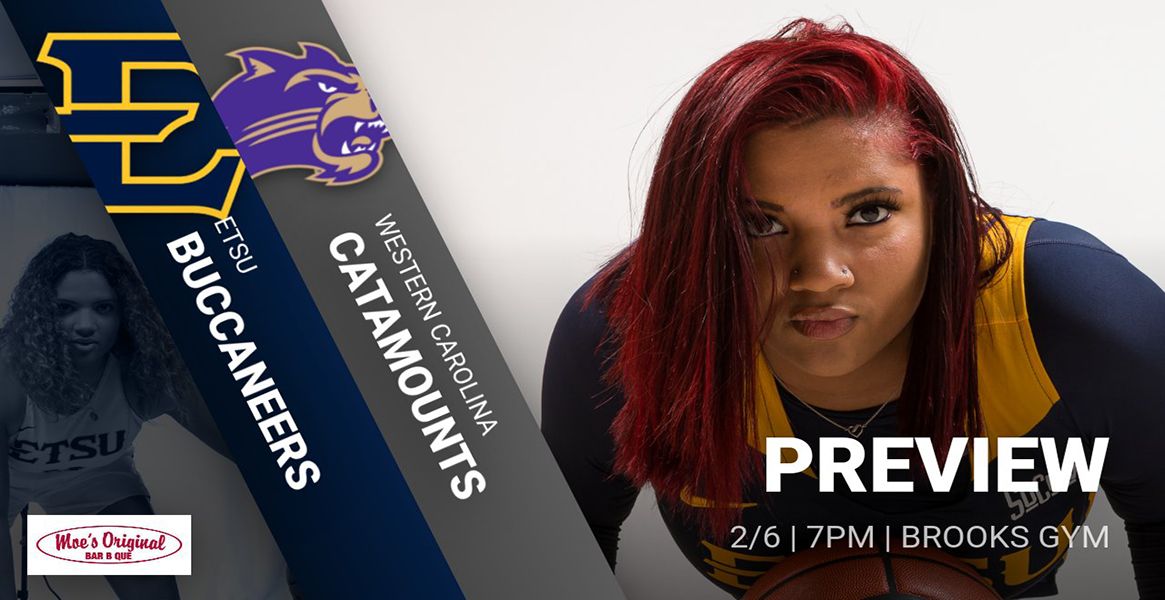 JOHNSON CITY, Tenn. (Feb. 5, 2020) – With one win over Western Carolina this conference season under their belts, ETSU Women’s Basketball returns to Brooks Gym Thursday in an attempt to sweep the regular season series with the Catamounts and put a painful Saturday result behind them.

Facing Chattanooga for the 86th time Saturday, the most ETSU has faced any one program in their history, the Blue and Gold were looking for their fourth win in five attempts against their in-state rival in what was sure to be a back-and-forth battle all afternoon.

To open the contest, the Mocs would strike first, scoring 20 of the first 31 points, eventually taking a six-point lead to the second quarter, which would house a stalemate between the two sides, Chattanooga maintaining a six-point lead going to the halftime locker room.

Saturday’s visitors to Brooks Gym appeared to seize command at the outset of the second half, scoring the first six points in just 86 seconds to force a timeout from Buccaneer head coach Brittney Ezell. The stoppage though, would help the Bucs stop the bleeding and get back into the game, closing the third quarter on a 15-7 run.

With a four-point deficit to make up going to regulation’s final frame, the Blue and Gold would slice the lead to two on three separate occasions, but were still trailing by exactly that amount with 18 seconds to go. Needing a two to tie and a three to take the lead, E’Lease Stafford (Lawrence, Kan.) sprang into action, driving to the rim and finishing a layup from the right side of the hoop to draw the Bucs level for the first time in nearly 36 game minutes.

With 10 seconds left, Chattanooga would design a clever inbounds play that would free the inbounder Bria Dial for a wide-open layup, but she would miss with seven seconds left, giving the Bucs a chance to win the game in regulation.

To try to pull off what looked to be an improbable finish just moments earlier, Ezell called on her star scorer Micah Scheetz (Knoxville, Tenn.) to give the Blue and Gold the win. The redshirt junior would isolate against her defender, drive to the paint, hoist a shot as time expired and see the ball go halfway down before coming out, Scheetz coming as close as possible to sending Brooks Gym into a frenzy.

Instead, overtime would ensue, and after the first two extra sessions solved nothing and witnessed the Bucs bench reduced to zero available players following three players fouling out and an injury to Jada Craig, ETSU’s five on the floor ran out of steam, outscored 13-4 in the third overtime as Chattanooga finished the matinee marathon with a 91-82 victory.

Kaia Upton (Nashville, Tenn.) would put forth a heroic effort, playing all 55 minutes, the most in a single game in program history and the most in the NCAA at any level this season, while Scheetz would play just 77 seconds fewer than the Nashville native, second to Upton in both of the aforementioned categories.

Since their 62-57 home loss to ETSU four weeks ago, Western Carolina has had their ups and downs, losing the four games immediately following their defeat at the hands of Ezell’s squad by double-digits, only to pick up their first Southern Conference victory Saturday by holding Mercer to just 40 points.

In the win, Lauren LaPlant, Andrea Martin Ruiz and Tembre Moates would all score in double-figures, but perhaps more impressively, the Catamounts defense would not allow any Bears to get to double-digits, Mercer shooting a meager 29 percent on the night while going 0-11 from the three-point line.

The triumph over the Bears was Western’s first in 18 tries, and in order to win back-to-back games for the first time in three seasons, they’ll have to put a halt to their road struggles, winless in their last 17 games away from their home gym.

Another streak the Catamounts face Thursday is their futility against the evening’s hosts, as the Bucs have downed Western Carolina 12 straight times, currently their most consecutive wins against any opponent.

The Buccaneers lead the all-time series 54-22, their 54 victories over WCU their most against any one team in program history.

The Buccaneer Sports Network will carry the 7 p.m. start, along with a half-hour pregame of the contest, with host Mike Gallagher. Gallagher will look back to the Bucs matchup with Chattanooga, break down the meeting with the Catamounts, have a conversation with head coach Brittney Ezell and much more. Listen here.