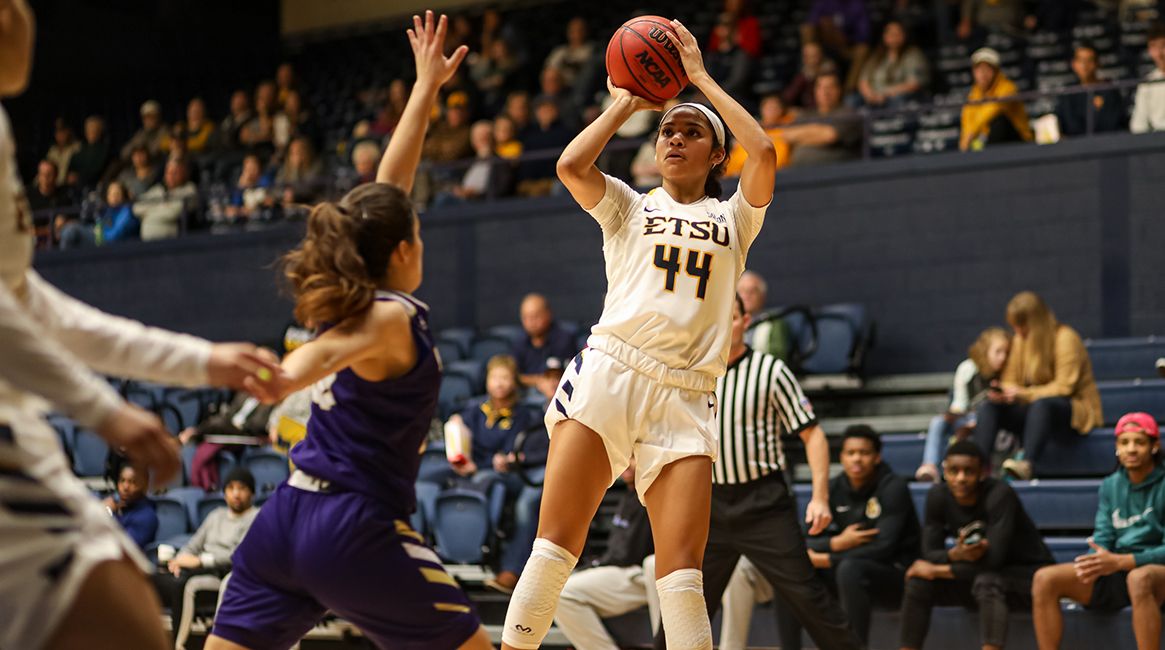 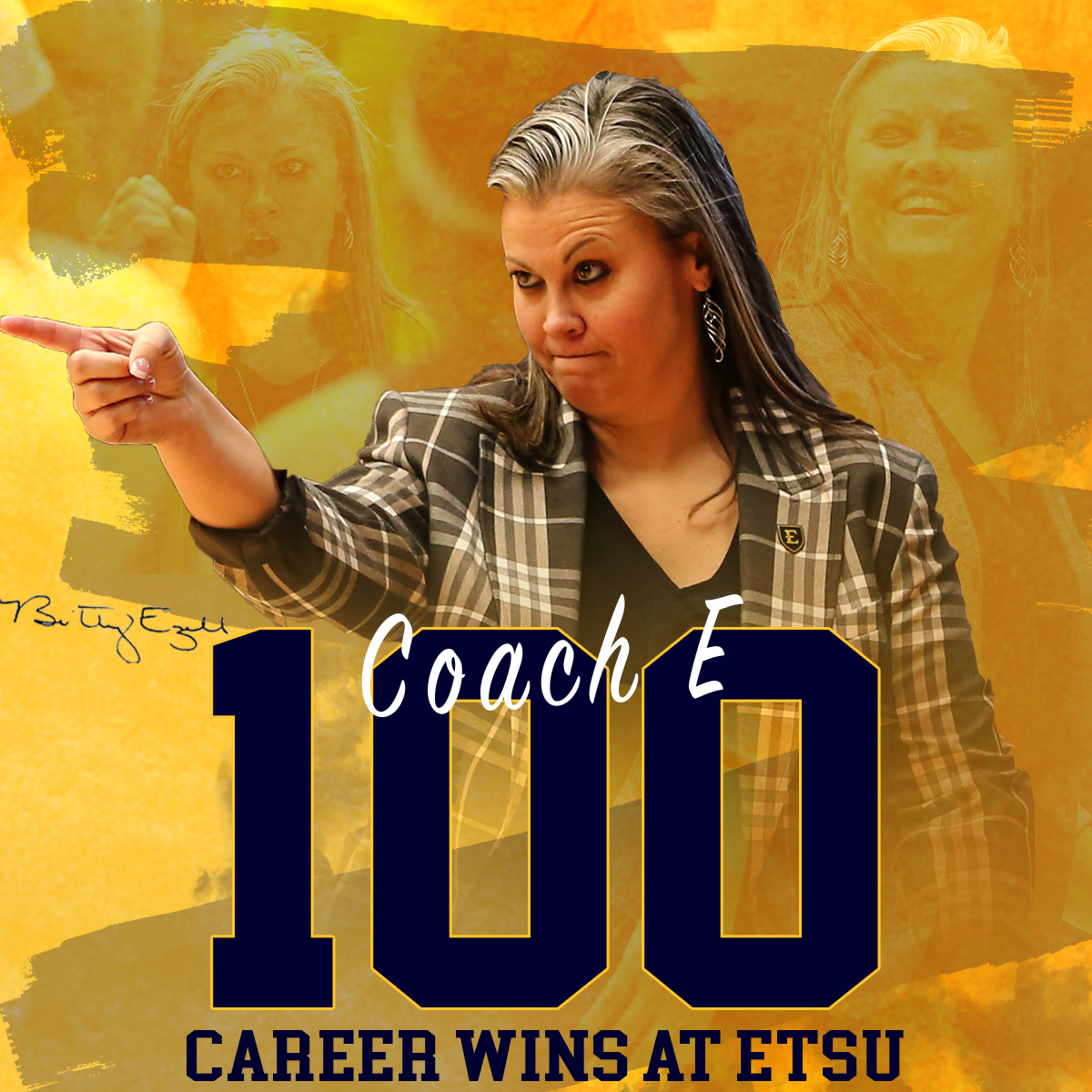 From the first whistle, ETSU went into attack mode. Before three minutes, the Bucs grabbed a double-digit lead and never looked back as the Blue and Gold won their most decisive contest of the season. The Bucs battled with only seven players, suffering a plague of injuries and sickness to grab a vital home win in the second half of the conference campaign.

Leading the way for the Bucs offensively, E’Lease Stafford (Lawrence, Kan.) produced a career-night. Stafford found her rhythm early, finishing with a career-best 29 points on 11-17 shooting, including 6-10 from behind the arc while grabbing five rebounds. In perhaps one of the most efficient individual efforts of the season, Shynia Jackson (Warner Dobins, Ga.) finished her evening with 18 points on only five attempts from the field, knocking down 11-12 of her free throw attempts. The sophomore grabbed her second double-double in the last four contests, adding a career-high 15 rebounds for the Bucs. Micah Scheetz (Knoxville, Tenn.) scored in double-figures for the 22nd consecutive game, adding 13 points and six rebounds to go along with three steals after coming off her 53 minute performance against Chattanooga. Her counterpart Kaia Upton (Nashville, Tenn.), who played all 55 minutes in the triple overtime loss, set a career-mark with nine dimes, pitching in eight points and four steals.

Collectively, the Blue and Gold cooled off after a hot shooting start, still eclipsing the 40% mark by shooting 41.8% (23-55) from the field, while recording 17 assists on the 23 made buckets. The Bucs flirted with perfection at the line, only missing three attempts from their 23 chances to shoot 87.0%. ETSU dominated the glass to a tune of 38-29, including a 16-3 advantage in second chance points off of 13 offensive rebounds.

After an initial surge less than a minute in thanks to an Amaya Adams (Kansas City, Mo.) layup and two free-throws by Upton, the first quarter soon turned into the Stafford Show. The sophomore from Kansas delivered with two straight triples to extend the lead to 10-0, forcing Western Carolina Head Coach Kiley Hill into an early timeout just over two minutes into the game. Scheetz would grab a steal, an offensive rebound and the put back to extend the lead to 12-0 before the Catamounts finally converted a bucket after three misses and three turnovers to start the game.

Gabby Brown (Fort Walton Beach, Fla.) added to the WCU struggles with a trey of her own before Stafford again lit up the net from deep. Upton converted both free throws before Stafford grabbed her 11th point of the first quarter to extend the lead to 22-6. Western Carolina tried to climb back with a basket, but four straight free throws from Jackson and an Upton jumper from the elbow gave the Bucs six unanswered points into the end of the frame, earning ETSU a 28-8 lead after 10 minutes, the Blue and Gold’s highest output in a quarter on the season.

Western Carolina scored the first five points in the second quarter as they tried to start their rally, Scheetz putting an end to it with a strong finish at the rim while earning the foul, converting for the old fashioned and-one. Another 5-0 outburst from the visitors once again was thwarted by the Bucs, who re-established an 18 point lead as the two sides went into the half with a score of 45-27 in favor of the hosts.

ETSU shot 13-26 from the field in the first half, connecting on 6-11 (54.5%) from deep. The Bucs were nearly flawless from the charity stripe, knocking down 13-15 (86.7%) freebies. ETSU forced 11 turnovers from the Catamounts to help increase their lead as Stafford and Jackson combined to match Western Carolina’s 27 points at the break.

The Bucs pushed their lead back up over 20 with four straight points before the Catamounts were able to plug away with a five point run of their own. ETSU rode the momentum out, not allowing Western Carolina to cut the lead any less than 16 during the third quarter. Jackson stamped the game late in the third, knocking down a trey with no time remaining to give the home side a 65-43 lead heading into the final stanza.

While the result was all but decided, the ETSU defense flexed their muscle in the final 10 minutes. Only scoring 11 points in the fourth, the Bucs nearly doubled the six-point tally that the Catamounts were able to muster by holding them to just 2-10 from the field. Coming into the game, WCU had only scored in single-digits in a quarter three times. The Bucs prevented them from double-digits twice, both in the first and fourth quarters on their way to an emphatic 76-49 victory.

Lauren LaPlant led Western Carolina in scoring, nabbing 14 points on 6-13 shooting. The rest of the Catamounts combined for 14-37 from the field. Judith Martin Ruiz matched Upton’s assist tally with nine dimes of her own, while Farasia Hodge led WCU in rebounds with eight.

The Blue and Gold look to continue tonight’s form on Saturday, hosting the UNCG Spartans in a 2 p.m. tipoff.