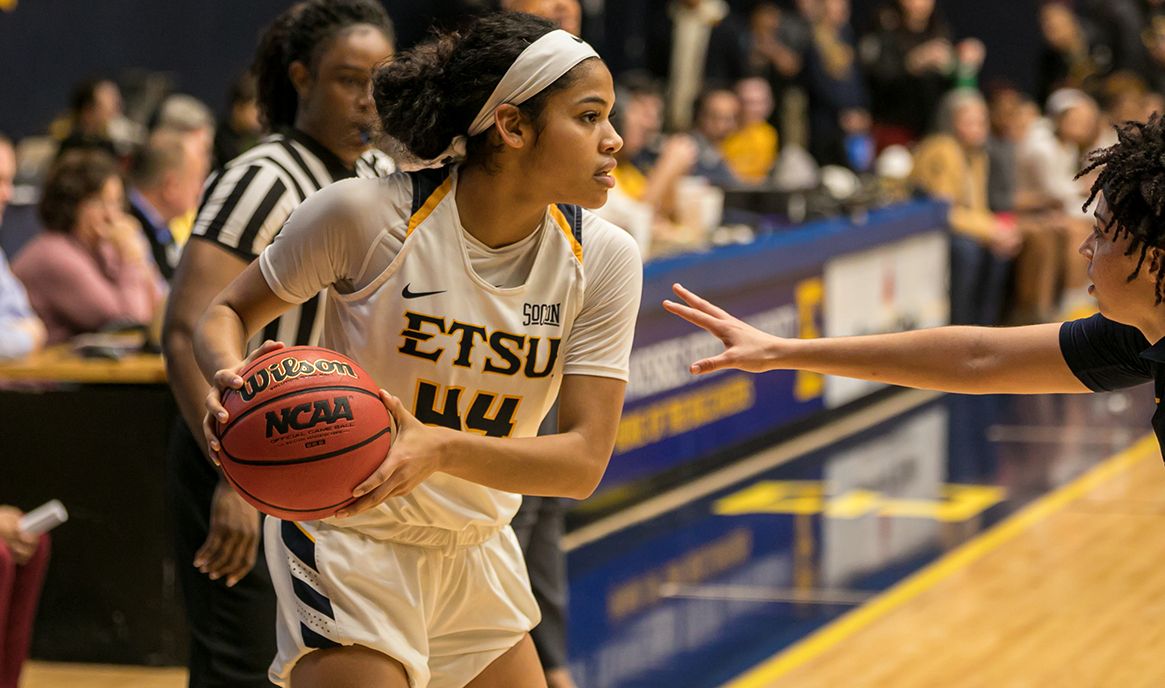 JOHNSON CITY, Tenn. (Feb. 8, 2020) – After finding no wrong on the offensive side of the ball the last time out, the ETSU women’s basketball team could not find the same rhythm on Saturday afternoon, falling 65-45 at the hands of UNCG in SoCon action in Brooks Gym.

After thumping the Catamounts just two days prior in one of the most convincing wins of the season, ETSU’s offense found no rhythm early on and soon succumbed to a 18-point deficit at the half that couldn’t be overcame.

E’Lease Stafford (Lawrence, Kan.) proved to be a silver lining in the contest, recently proving her offensive ability. The sophomore came off a career-high night of 29 points against Western Carolina to score 18 points on 6-11 shooting this afternoon while securing nine rebounds. It was the first time this season Micah Scheetz (Knoxville, Tenn.) or Kaia Upton (Nashville, Tenn.) did not lead the team in minutes played as Stafford finished with 38. Scheetz’s consecutive streak of games in double-figures ended, struggling from the field to nine points, trying to overcome the watchful eye of the Spartan defense by providing six rebounds. Amaya Adams (Kansas City, Mo.) finished with nine points, her best output in the last 11 games.

As a team, the Bucs finished just 16-47 from the field while recording four triples on 17 attempts, shooting 34.0% and 23.5% respectively. ETSU shot 9-14 (64.3%) from the charity stripe. For the second time this season, the Bucs won the battle of the glass in consecutive games, outpacing the Spartans 37-31. The Bucs were unable to use a 7-4 advantage on the offensive boards to their liking, being outscored 5-4 in second chance points.

After ETSU opened the game up with a 5-4 lead, the Spartans rattled off eight-straight points before Stafford knocked down a jumper at the 4:24 minute mark. The bucket would be the last for the Bucs in the quarter, UNCG knocking down two treys to extend their lead to 18-7 as the opening frame closed.

The offensive woes continued for ETSU, the Spartans scoring the first six points of the second quarter. The Buc defense stepped up, allowing just four points in the opening six and a half minutes of the quarter. Unable to get their offense to the same tune, Upton downed one of two free throws with 1:48 remaining in the half before another 8-0 Spartan run saw the Bucs trail 29-8. ETSU finally grabbed their first basket after a 14:23 drought as Scheetz launched a desperation three that banked in at the buzzer to head into the locker room trailing 29-11, converting only their second basket in the prior 18 attempts. The four points in the second quarter and 11 in the half mark season-lows for the Bucs on the year.

The halftime talk worked offensively, the Bucs coming out firing to a tune of 60% over the third quarter, led by Stafford with six points. However, the Bucs were unable to chip away at the lead with the Spartans outscoring the Bucs by one point through three less turnovers and converting on the offensive glass.

Trailing by as much as 24 points early in the fourth, the Bucs used an 11-0 run behind nine points from Stafford and Adams to try one last attempt at a comeback, trailing by 13 points with just under four minutes to play. Not to be, the visitors tightened their defense while scoring the last seven points of the contest as the Bucs fell in a 65-45 effort.

Nadine Soliman had a strong offensive showing for the Spartans, scoring a game-high 29 points on just 18 shots, 12 points coming from the three-point line. Te’Ja Twitty finished with a double-double of 14 points and 13 rebounds.

The Blue and Gold head on the road for the last away double-header of the season, contesting with Wofford in a 7 p.m. showdown on Thursday, February 13.