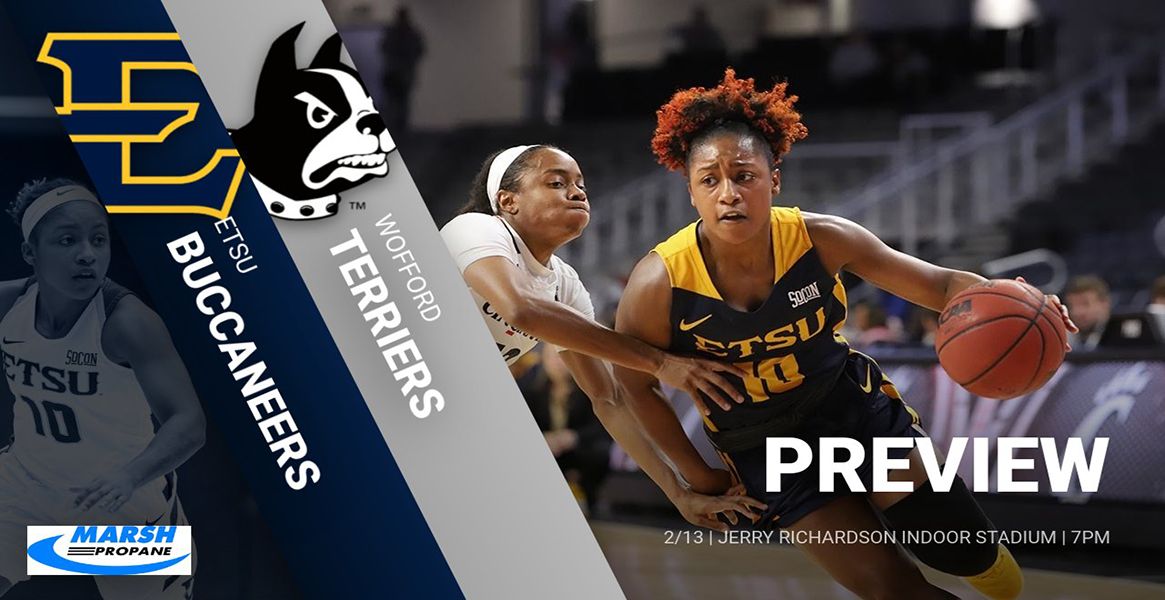 Bucs On The Road For Redemption at Richardson Indoor Stadium
ETSU at Wofford | February 13, 2020
Related Links

SPARTANBURG, S.C. (Feb. 12, 2020) – After struggling in their first matchup against Wofford this year, ETSU Women’s Basketball travels to Spartanburg for a return matchup with the Terriers at Jerry Richardson Indoor Stadium, the site of a 2019 Valentine’s Day thriller that left the Bucs brokenhearted.

Looking to give their head coach a present worth celebrating, ETSU welcomed in Wofford on Brittney Ezell’s seventh birthday as head of the Bucs, a day they hoped would bring a bounce back victory after the Blue and Gold stumbled in their conference home opener against Furman.

Intent on spoiling the occasion, Wofford started fast, scoring 20 of the 27 points Brooks Gym held in the first 10 minutes of game action. The Bucs were by no means out of it, though, Arielle Harvey (Atlanta, Ga.) hitting a three with time winding down in the first half to make the halftime deficit a manageable 12 points.

But as they did in the first quarter, the Terriers bit the Blue and Gold right out of the locker room, scoring 20 third quarter points to streak away from any comeback ETSU had in mind, pushing their lead to 27 going to the day’s final frame.

While the hosts would fight valiantly in the fourth quarter, it was too late, the Terriers claiming their third consecutive win over ETSU after losing 24 of the first 28 matchups in the series to the Bucs. In the defeat, Micah Scheetz (Knoxville, Tenn.) extended her double-digit scoring streak to 18 straight games, though that run would come to an end in ETSU’s last game against UNCG Saturday, a 65-45 setback.

Since the Bucs and Terriers tangled for the first time this season, Wofford has been hot, using their win over ETSU to vault them to a run in which they have won five of their last six games. Amongst the triumphs are wins over UNCG, Furman and Samford, all by six points or less, while their lone loss over the last three weeks of Southern Conference success was to Mercer by a single tally.

The Terriers lead the SoCon in scoring during league play, averaging 69 points per night, and they’ve been capable of putting up the pace-setting number by shooting at a 76 percent clip from the line and a 35 percent mark from outside the arc, both top-three grades in the conference. ETSU will have to be ultra-aware of Wofford’s penchant to control the turnover battle as well, leading the league in turnover margin at a plus-5.56 as the two teams enter their final five games of regular season play.

The last time the Bucs visited Jerry Richardson Indoor Stadium was 364 days ago, ETSU getting to play the game they loved on 2019’s version of Valentine’s Day that featured a matinee tip time of 11 a.m. ET to accommodate Wofford’s Education Day. While the Terriers were hosting the event, it would be the Blue and Gold delivering a lesson in the first quarter, taking the reigns, and a lead, in the early going. Undeterred, though, Wofford would awaken from their morning slumber in the second, outscoring Ezell’s bunch 25-10 to grasp a 13-point lead heading to the half, a margin that would bump to 14 after three quarters of play.

In desperate straits, ETSU came out with conviction in the fourth quarter, erasing all but two points of the Terriers advantage with a 19-7 run in the first seven minutes and 34 seconds of the decisive stanza. The teams would trade points over the next two minutes, and after a pair of Alexis Tomlin free throws to extend the Wofford lead to three with four seconds left, the Valentine’s Day visitors would have one final chance.

Following a timeout in which Coach Ezell would draw up a sideline-out-of-bounds play, sophomore guard Erica Haynes-Overton would receive the inbounds pass, go to the right wing, elevate to try to tie the game and send it to overtime, but come up empty in her attempt to find the bottom of the basket, Wofford prevailing 77-74. The Terriers would go on to defeat ETSU in the Southern Conference quarterfinals to end the Bucs season, Wofford then beaten in the semis by eventual league champion Mercer.

The Buccaneer Sports Network will carry the 7 p.m. start, along with a half-hour pregame of the contest, with host Mike Gallagher. Gallagher will look back to the Bucs matchup with UNCG, break down the meeting with the Terriers, have a conversation with head coach Brittney Ezell and much more. Listen here.

Thursday’s festivities will also be broadcast on ESPN+, a video stream available here.