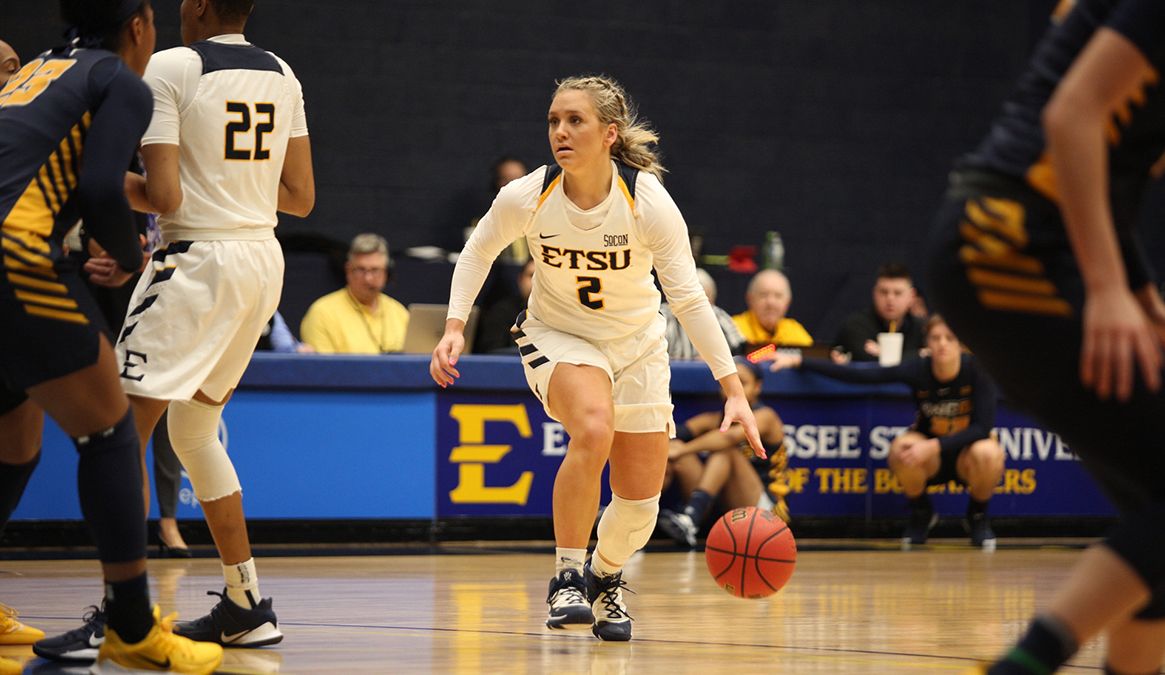 SPARTANBURG, S.C.. (Feb. 13, 2020) – In a Thursday evening SoCon matchup, the ETSU Women’s Basketball Team ended the night on the wrong side of an 86-62 score line in Jerry Richardson Indoor Stadium, falling to hosts Wofford in Southern Conference play.

Despite the best shooting effort on the season for the Bucs, ETSU were on the other end of a 23-0 Wofford advantage in second chance points and a 24-8 deficit in points off turnovers.

After her 22 game streak of double-digits was snapped last time out, Micah Scheetz (Knoxville, Tenn.) found her way back on top of the scoring sheet for the Blue and Gold, grabbing a team-high 19 points. Kaia Upton (Nashville, Tenn.) added 11 points in the losing effort with three assists while recent offensive workhorse E’Lease Stafford (Lawrence, Kan.) was held to eight points and three rebounds.

Trading the first six buckets of the contest, the home side sparked a 9-1 run to gain an early lead into the media timeout to the tune of 16-7. Upton came out of the timeout with some offense for the Bucs, grabbing an old fashioned three-point play before taking it to the rim on the next possession to cut the lead. Finding themselves trailing 21-12, ETSU found another stroke of offense through the touch of Arielle Harvey (Atlanta, Ga.), finishing off inch-perfect passes from Scheetz and Upton before Upton found a bucket of her own.

The Terriers closed out the quarter with the last four points, holding a 25-18 lead after the first frame. Upton finished the quarter a perfect 3-3 shooting for seven points along with an assist.

Wofford enjoyed an early start to the second, stretching their lead to as much as 12 with six minutes to play before Scheetz drained the first attempted triple for the Bucs of the game, trailing 36-27 heading into the media timeout. A Stafford triple from the wing brought the game to 10 points with just under a minute before Wofford answered to take a 46-34 lead into the break.

Upton and Scheetz led the first half for the Blue and Gold with nine points apiece, combining for 7-12 (58.3%) from the field. Shynia Jackson (Warner Dobins, Ga.) produced six points and four rebounds in the opening 20 minutes. The Bucs were only credited with two assists on the 12 field goals in the first half, being outrebounded 17-11 by the Terriers.

Coming out of the break, ETSU’s offense kept its rhythm, knocking down six of the first nine shots of the half capped off by a long range effort from Scheetz. Despite the hot start, the Bucs found themselves being undone by offensive rebounds and a disparity of fouls. Losing the free throw battle by 12-0 in the third quarter, the Bucs fell victim on the wrong side of a few calls that slowed any momentum the Bucs gathered, heading into the final frame trailing 68-50.

Scheetz opened the quarter knocking down another three to cut into the lead before playing a beautiful give and go with Tijuana Kimbro (Memphis, Tenn.) to knock down a five footer before ETSU head coach Brittney Ezell took a timeout in order to give the Bucs a refresher to push for one more comeback bid. The hosts were able to fight off any chance of that comeback, as Wofford saw out the game to an 86-62 win.

Four Wofford players finished in double-digits, led by Da’Ja Green with 24 points on 8-16 shooting. Jamari McDavid finished with 15 points and nine rebounds, while Cairo Booker (14 points, six assists) and Lilly Hatton (10 points) contributed in the winning effort. The Terriers shot 31-66 (47.0%) from the field, turning the ball over just six times. Despite the win, the Terriers suffered two injuries that took starters McDavid and Chloe Wanink out of the game.

The Blue and Gold finish the road trip taking a short journey to Greenville, S.C. to take on Furman on Saturday, February 15. The matchup is scheduled to begin at 2 p.m.