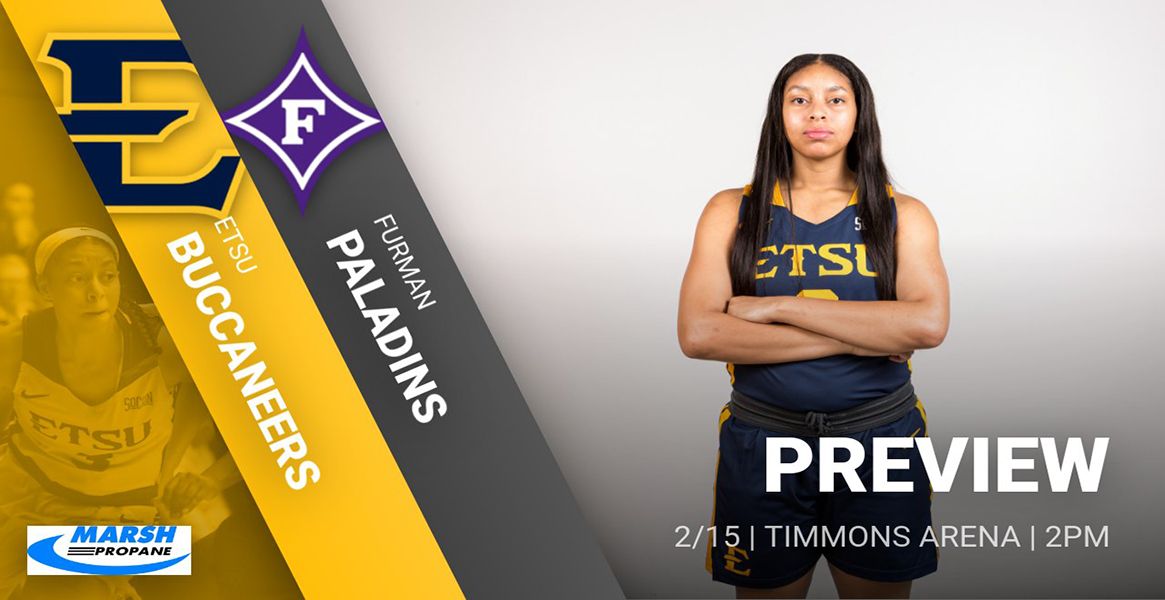 GREENVILLE, S.C. (Feb. 14, 2020) – After a difficult night on the defensive end led to a loss at the Jerry Richardson Indoor Stadium in Spartanburg Thursday, ETSU Women’s Basketball makes the short trip to Timmons Arena for a second chance at foiling Furman.

Playing their third game inside Wofford’s new home for women’s and men’s basketball, ETSU was looking for revenge on the Terriers after the season’s first meeting between the two teams at Brooks Gym would see the visiting side spoil head coach Brittney Ezell’s Jan. 18 birthday.

The Terriers, though, were shredding the nets early and often, piling up 25 first quarter points and 21 more in the second to take a 46-34 lead to halftime behind a balanced scoring attack that featured four players on the verge of double-figures.

Once the second half came around, four would indeed be the amount that would get to 10-plus points, as Lilly Hatton, Cairo Booker, Jamari McDavid and Da’Ja Green all crossed the threshold on the journey to Wofford scoring their most points against a Division I opponent all year. While McDavid and Southern Conference Preseason Player of the Year Chloe Wanink both left the game with knee injuries, it wouldn’t bother the fluidity of Jimmy Garrity’s squad, posting 86 points, Green leading the way with a game-high 24.

Micah Scheetz (Knoxville, Tenn.) would score in double-digits for the 27th time in the last 29 games, leading ETSU with 19, while Kaia Upton (Nashville, Tenn.) would accompany her teammate to double-figures, ringing in 11 while playing the entire 40 minutes. The Bucs shot the ball well themselves, hitting 49 percent of their shots from the floor, five of their seven threes, and 11 of their 13 free throws. ETSU, though would turn the ball over 17 times, Wofford flipping those takeaways into 24 points, while the Bucs also lost the battle on the boards 35-20, a 12-2 advantage on the offensive glass for Wofford leading to a 23-0 mark in second chance points.

Furman entered the season as the league favorite in the coaches poll, but have endured a number of surprising results recently, including a six-point loss to six-win Mercer and another of the same at home versus seven-win Chattanooga Thursday.

At their best, the Paladins are getting efficient play from wing Tierra Hodges, deadeye shooting from guard Le’Jzae Davidson and a strong presence from their post threat Celena Taborn, but too often lately for head coach Jackie Carson’s liking the offense has failed to follow the blueprint. Losing three of their last four games, Davidson has made just 10 of her 44 field goal attempts in the three losses, Taborn has taken just 13 shots over the last three outings and in Thursday’s loss to Chattanooga the only consistency Furman has had in the league season failed to deliver, Hodges shooting 29 percent from the floor totaling just six points.

Despite the recent struggles, Furman still leads the Southern Conference in field goal percentage during league play, making 42 percent of their shots from the floor, while making a constant and concerted effort on the boards, leading the league in rebounding offense, defense and margin during conference games.

Saturday’s meeting between ETSU and Furman will be the 65th in the history of the two team’s existence, the Paladins leading the series 41-23.

In their first game this year, a competitive contest ensued at Brooks Gym, the Paladins up by one at the half. While Furman would go on a run in the third stanza to lead by 12 entering the final third of the game, the Bucs would get the lead to as little as four with just seconds remaining in the quarter. But following a momentum-changing, questionable call from the refereeing crew that pushed the four-point lead for Furman to eight in the final seconds of the third quarter, the Paladins would use the springboard to go on a 9-1 run to open the fourth quarter and essentially put the game away, winning going away 81-62.

Saturday’s festivities will be broadcast on ESPN3, a video stream available here.