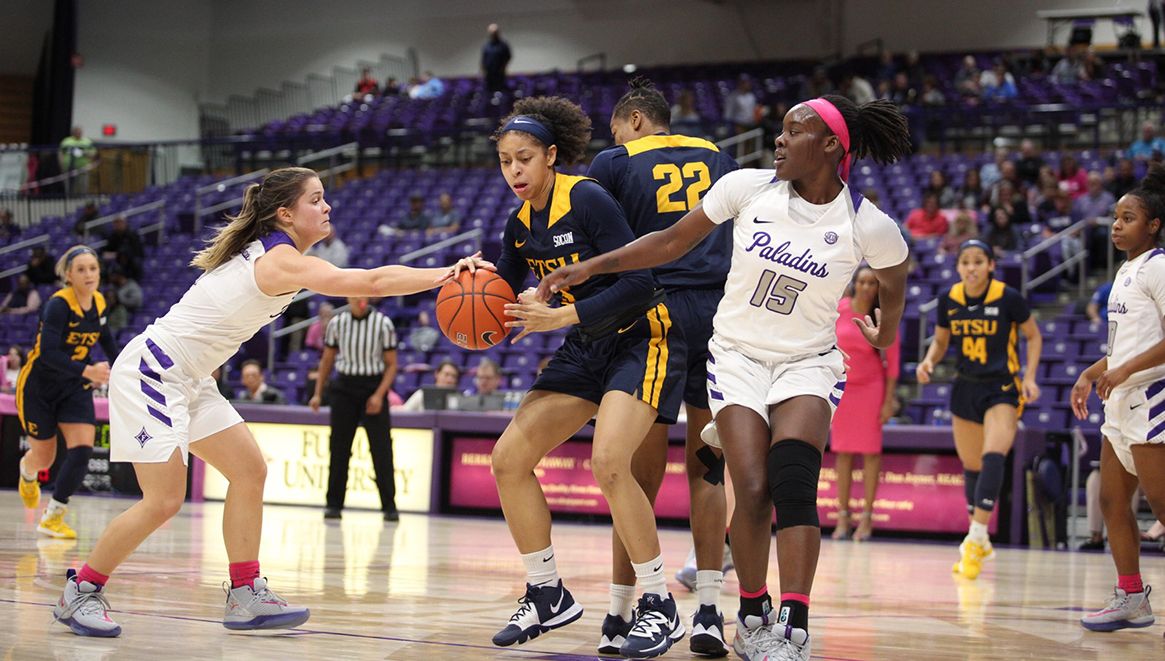 Harvey scores double-figures in penultimate road game for the Bucs

GREENVILLE, S.C. (Feb. 15, 2020) – Trying to avenge the loss in Brooks Gym earlier in the season, ETSU women’s basketball came out the wrong side of a 67-47 score in Timmons Arena as Furman defended their home place on Saturday afternoon in SoCon action.

The loss moves the Blue and Gold to 8-18 overall with a 3-8 mark in the Southern Conference, while Furman improves to 16-10 and 6-5 in league play.

For the second time this season, Arielle Harvey (Atlanta, Ga.) finished in double-digits, matching her season-high and career best as a Buc with 10 points. Kaia Upton (Nashville, Tenn.) joined Harvey in double figures with 10 points of her own, while Shynia Jackson (Warner Dobins, Ga.) ended the afternoon with eight points and eight rebounds. Micah Scheetz (Knoxville, Tenn.) finished with a team-high four assists.

Despite the second time of meeting on the year, both teams seemed to be feeling each other out in the opening two minutes. The Paladin defense sagged off of Stafford at the three point line, the sophomore making them pay as she opened the scoring two minutes into the game. Scheetz found an open Jackson in the lane before knocking down an altered shot as the Bucs took an 8-6 lead into the first media timeout.

Furman broke out with a 7-0 run to reverse the hosts fortunes, ended by a long jumper from Upton to see the Bucs trail by three. The Paladins, however, continued their strong finish to the quarter by making the last four points of the quarter for a 17-10 lead.

Furman picked up where they left off, enjoying an 11-4 run to open the first five minutes of the second stanza. Upton knocked down a pair of free throws while Jackson drove and finished a strong move to the basket to help cut the deficit, but Furman used a 6-7 field goal streak to help keep their double-digit advantage intact. The Bucs kept Furman off the score sheet the last two minutes of action, able to slide the deficit to 36-22 at the halftime break.

ETSU fell victim to a hot shooting Paladin side who nabbed 15-25 (60.0%) field goals in the first half, connecting on 4-6 (66.7%) from behind the arc. Milica Manojlovic shot a perfect 6-6 from the field for 14 points to lead the Paladins, doubling her season average.

The Bucs and Paladins went back and forth for the majority of the period, the visitors receiving a huge boost off the bench from Harvey. The senior slipped a screen for two of her six points in the quarter before bullying her way into the paint for an easy bucket. Harvey did it on the defensive side of the ball, grabbing two steals in the quarter. Despite the effort, the Bucs ran into a Paladin side that shot 7-10 (70.0%) from the field to push their lead to 17.

Furman opened the quarter on a 12-2 spark, all but eliminating the Bucs chances for a comeback, falling victims to a four minute drought in the middle of the quarter as the hosts saw out a 67-47 victory.

Manojlovic led all scorers with 19 points, one of four Paladins in double-figures. Tierra Hodges finished with a 12 point, 15 rebound double-double, while Lindsey Taylor and Le’Jzae Davidson also ended on 12 points. Furman finished shooting 27-50 (54.0%) from the field and a strong 8-12 (66.7%) from three. The Paladins outrebounded the Bucs 42-22, 31 coming on the defensive glass.

ETSU comes back home for their final home split of the season, hosting the Samford on Thursday, February 20 at 7 p.m. before taking on Mercer on Saturday at 2 p.m. in Brooks Gym.