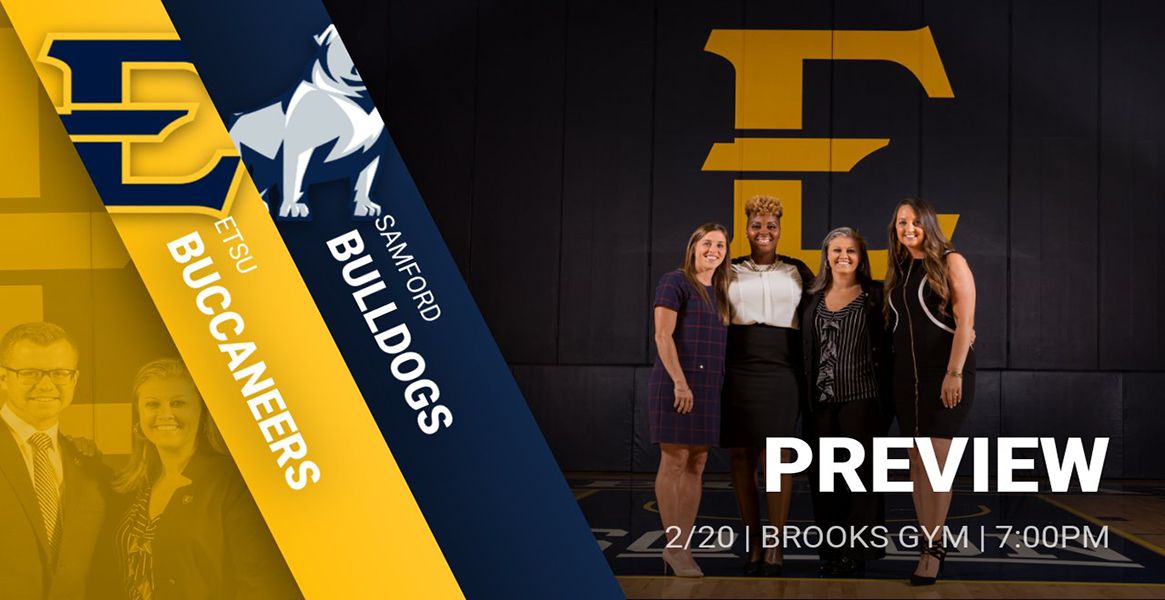 JOHNSON CITY, Tenn. (Feb. 19, 2020) – Entering the last week of home games in their 2019-20 campaign, ETSU Women’s Basketball is back in Brooks Gym to continue to play their part in raising awareness for breast cancer Thursday versus Samford.

Looking to avenge a loss on their home floor earlier in the conference year that was much closer than the final score indicated, ETSU was in Greenville, S.C. Saturday to round out their last two-game road trip of the regular season.

While Furman wouldn’t pull away from ETSU until a 9-1 run at the outset of the fourth quarter in their first meeting at Brooks Gym one month ago, the Paladins would hit the gas much earlier this time around, taking an 8-6 deficit at the first media timeout of the game and turning it into a 17-10 lead by the end of the first quarter.

The Bucs would hang tough through the first few minutes of the second stanza, getting a basket from Shynia Jackson (Warner Robins, Ga.) and a pair of free throws from Arielle Harvey (Atlanta, Ga.) to keep the lead at seven, but 15 of the final 23 points in the quarter were claimed by Furman, moving to halftime with a 36-22 lead.

When the teams emerged from the locker room, Furman continued to pressure ETSU’s defense, making life difficult on the Blue and Gold by hitting seven of their 10 shots in the quarter to take a 17-point advantage to the final frame. While the Bucs would find their groove offensively in the final few minutes of the fourth quarter, Le’Jzae Davidson took the drama from the proceedings before the Bucs could make it competitive, knocking down threes on back-to-back possessions before the visitors could score a point in the fourth quarter. Despite the visitors finishing the game on a 7-0 run, the Paladins would secure the win 67-47.

Harvey and Kaia Upton (Nashville, Tenn.) would share top scoring honors for ETSU, each logging 10 on the stat sheet, while Jackson would contribute eight points and a team-high eight rebounds.

Samford and UNCG, the two teams that share the Southern Conference lead with only a few remaining games for each of the eight clubs in the league, continue to be the surprises of the SoCon.

While the Spartans were taking care of business at Western Carolina Saturday, a 72-61 win over the Catamounts, the Bulldogs were trying to do the same in Macon versus Mercer. In what would initially unfold as a rough and tumble war of attrition, little separated the two sides entering the fourth quarter, Samford leading the hosts 35-34 in what appeared to be a race to 50.

The fourth quarter would hold an entirely different feel, though, with the teams combining for 45 points, a comparative offensive explosion next to the previous 30 minutes of struggles for both sides when possessing the ball. Fortunately for Samford, 25 of the 45 would go their way, making all nine of their free throws over the final 10 minutes, while Mercer would be shut out in the fourth quarter at the charity stripe. Senior guard Charity Brown would score eight points, grab two rebounds and hand out three assists in the decisive quarter alone.

The Bulldogs are led by junior big Natalie Armstrong, who sits at the top of the Southern Conference in scoring during league play, senior guard Sarah Myers the other member of the Bucs Thursday foe averaging in double-figures throughout the 2019-20 season.

Thursday will mark just the 14th meeting between the Bucs and Bulldogs, Samford using their January 68-34 win in Birmingham to break the 6-6 deadlock in the all-time series.

In the victory Jan. 25, Thursday’s visitors to Brooks Gym used a huge second half to run away with the win. Following a low-scoring first half which saw ETSU only trail 29-20 at the break, Carley Kuhns team continued their strong defense while also establishing some consistency on the offensive end of the court, scoring 39 second half points to streak away from an ETSU side that could manage just seven points in each of the final two quarters. Micah Scheetz (Knoxville, Tenn.) would notch 10 points to lead the Bucs in scoring while Ti Kimbro (Memphis, Tenn.) would snare 10 boards to record her third double-digit rebounding night in her first year in Johnson City.

ETSU’s rematch with Samford houses the Blue and Gold’s official Play4Kay game. In the annual event, the Bucs will don pink shooting shirts in pregame warmups and pink accessories in-game to show solidarity against breast cancer and raise awareness in the fight against the deadly disease.

The 2020 version of ETSU’s Play4Kay game is once again held in conjunction with the Kay Yow Cancer Fund: “Our mission is to extend and improve the lives of all women battling cancer by raising money for research and assisting the underserved. Coach Yow believed we could make a greater impact as a collective team. She felt as if basketball coaches, officials, and players not only shared a passion but a community. Her public battle with cancer served as a platform to rally coaches to be a part of one team and against one opponent – cancer.”

ETSU has already hosted one Pink Game this year, and their fight, which strikes a personal chord with the coaches on staff, continues Thursday.

Throughout February we're supporting a great cause, and we want you to join us in the fight!

Coach E talks about why @KayYowFund and the battle against breast cancer is so big in her life and how you can help...Join the Play4Kay Free Throw Challenge here: https://t.co/xMh3EpuXND pic.twitter.com/RELjcr0jiU

Thursday is our official @KayYowFund game as we take on Samford at Brooks Gym at 7pm!

Hear what supporting the Play4Kay cause means to @CoachMacETSU, and to help us in the National Free Throw Challenge, click here: https://t.co/xMh3EpuXND#BlueCollarGoldStandard pic.twitter.com/ALDz327WDt

Fans can support the cause by wearing pink to the Bucs meeting with Samford or by clicking here to donate to ETSU’s Play4Kay Free Throw Challenge with all proceeds benefitting the Kay Yow Cancer Fund.

The Buccaneer Sports Network will carry the 7 p.m. start, along with a half-hour pregame of the contest, with host Mike Gallagher. Gallagher will look back to the Bucs matchup with Furman, break down the meeting with the Bulldogs, have a conversation with head coach Brittney Ezell and much more. Listen here.