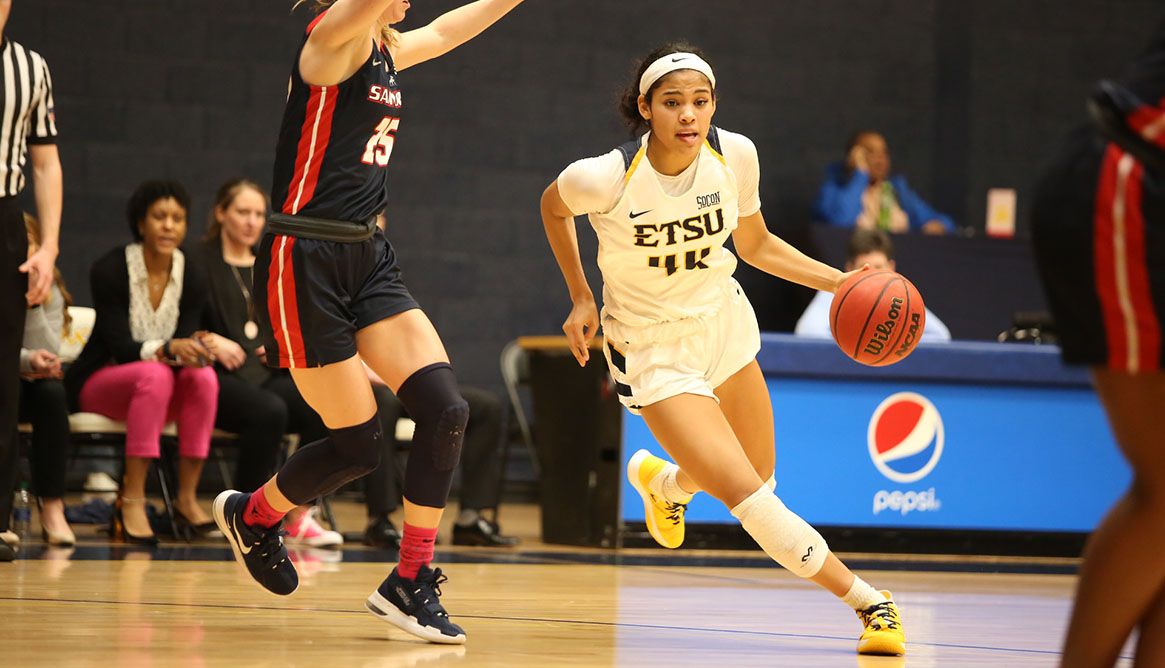 Trying to avenge their loss to the Bulldogs earlier in the season, the Bucs overcame a 12-0 run to open the second half with a 16-3 run of their own, unable to sustain the momentum as their comeback bid was vetoed by the Samford offense.

With the loss, the Blue and Gold now sit at 8-19 on the year, holding a 3-9 record in the Southern Conference. The Samford Bulldogs move to an even 13-13 on the year, fending their tied-top spot in the SoCon to sit at 8-3 in the conference campaign.

Micah Scheetz (Knoxville, Tenn.) was stifled offensively, but found a way to muster up 18 points on 5-21 shooting from the field, balancing that by knocking down seven free throws. The redshirt junior added four assists to lead the team. E’Lease Stafford (Lawrence, Kan.) continued her strong conference form with 13 points and five rebounds, while Kaia Upton (Nashville, Tenn.) showed her range on her way to a 12-point performance with two assists for the Bucs. Shynia Jackson (Warner Robins, Ga.) cooled off after her early start, finishing with nine points as Gabby Brown (Fort Walton Beach, Fla.) led ETSU in rebounding with six karoms.

Collectively, the Bucs shot 19-59 (32.2%) from the field while knocking down 6-20 (30.0%) from deep. After falling early in the rebound margin, the Bucs controlled the glass the final third of the way through the game to even up the tally at 38 apiece, including 19 offensive boards. Despite losing the turnover battle 15-14 to the Bulldogs, the Bucs were more efficient with their takeaways, outscoring Samford 18-11 in points off turnovers. Second in the league in blocks per game, the Bucs only recorded one block on the evening through Stafford, while assisting on more than half of their 19 baskets with 10 total dishes.

After a scoring output of just 34 points at Samford just under a month ago, second-fewest in program history, the Bucs came out looking to right the ship. After an initial five-point surge from Jackson turned into a slim Bulldog lead, back-to-back buckets by Stafford and Upton was followed up by Scheetz, who fought off the contact on the elbow while getting her jumper to drop, finishing on the old-fashioned three point play to put the Bucs up 14-8 midway through the opening quarter after a 7-0 run from the Blue and Gold.

Samford showed why they are in the higher altitude of the Southern Conference as they clawed their way back into the contest. After a pair of free-throws cut the visitor’s deficit to one, the Bulldogs were first to Charity Brown’s hurried three-point attempt as Sarah Myers collected and put back the rebound to take a one-point lead heading into the second quarter.

Taking their final lead at 25-23 three minutes into the second quarter, the Bucs saw their advantage flip and turn into as much as an eight-point deficit. After trading multiple baskets over the final few minutes, the Bucs used the free-throw line to cut the Samford lead to seven to enter the half trailing 42-35.

Coming out of the break, the Bulldogs lit up the net early on, hitting three triples in the opening two minutes to force the Bucs into a timeout, a seven-point deficit quickly turning into 18. Natalie Armstrong capped off the 12-0 run with a free throw, ETSU finally registering the first point of the half with less than five minutes on the clock as Jackson knocked down a pair of free throws.

The Buc defense began to lock in, using that spark to go on a 7-0 run of their own. After Samford responded with an and-one opportunity, the Bucs once again went on the attack, bettering their previous run with a 9-0 spurt after Stafford connected on a free throw and Scheetz provided five consecutive points for the Blue and Gold, the run capped off with a Stafford trey right in the face of her defender to put ETSU down by just two possessions. After calling a timeout to gather her team’s side, Carley Kuhn’s squad knocked down a jumper and scored on their next possession to increase the lead back to double-digits, 61-51, entering the final 10 minutes.

ETSU found it tough to generate enough offense to make that final charge, getting outscored 15-9 over the course of the fourth stanza on their way to a 76-60 loss in Brooks Gym.

In the winning effort, Myers had herself a night with 27 points on 11-18 from the field, adding 10 boards to grab a double-double. Shauntai Battle and Armstrong finished with 12 and 11 points respectively, while Brown finished two points short of a double-double of her own with eight points and 10 rebounds. As a team, Samford shot 29-61 (47.5%) from the field while connecting on 10-21 (47.6%) shots behind the arc.

ETSU finalizes their home portion of the season when they tip off on Saturday in Brooks Gym, taking on the Mercer Bears at 2 p.m.