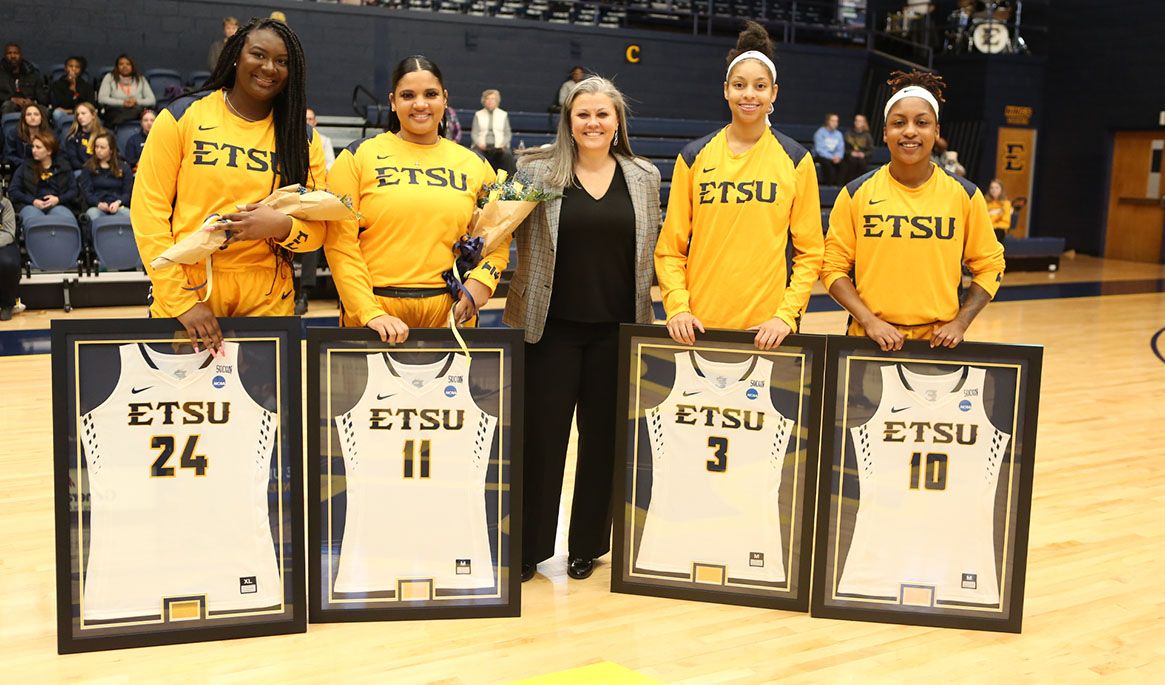 JOHNSON CITY, Tenn. (Feb. 22, 2020) –  The ETSU Women’s Basketball Team sent their seniors off with a Senior Day to remember, coming back from a 13 point, fourth quarter deficit to defeat Mercer 56-54 in conference action on Saturday in Brooks Gym.

Leading by nine heading into the fourth, Mercer looked to seemingly kill the game off by scoring the first four points to increase their advantage. Micah Scheetz (Knoxville, Tenn.) had different ideas, connecting just inside of the paint with a jumper before E’Lease Stafford (Lawrence, Kan.) knocked down the first triple of the contest for either team. Amaya Adams (Kansas City, Mo.) took her turn to get loose, driving to the basket with a finish as she got hacked and sent to the line for the old-fashioned three-point play. Adams followed up with a more traditional three from the corner on the next possession before Scheetz found Shynia Jackson (Warner Dobins, Ga.) for an easy fast break score as Brooks Gym went into a frenzy, eliminating the 13-point deficit in almost three minutes.

The Bucs then went on the attack, continuing on a 19-2 run as Scheetz took her turn with an and-one opportunity to put the Bucs up 51-47 with three minutes to play. In the crunch time, Scheetz gave the Bucs the final lead of the contest to put ETSU up by two with 1:29 to play. Mercer was unable to connect with both on the free throw line to tie the game after a Buccaneer foul put them at the line down by two, as Gabby Brown (Fort Walton Beach, Fla.), came out with the vital rebound before the Bears fould her to put her to the line with three seconds remaining. The Pearl River CC transfer sunk one of her two free throws to put the score to 56-54, where the Bucs would hang on as Jaron Dougherty made her last second attempt but was unable to get it off before the final buzzer as the Bucs held off the Bears for the season sweep in dramatic fashion.

Jackson led the Bucs with a game-high 18 points, grabbing a double-double with 15 rebounds, matching her career-high set in the win against Western Carolina. Scheetz finished her day with 15 points, including eight in the final frame with none more important than the game-winning layup. Amaya Adams finished with a career-high 13 points, scoring eight in the fourth quarter as well, racking up a +23 ratio when on the court. Kaia Upton (Nashville, Tenn.) led the defensive charge with three steals while Brown had a game to remember, recording a career-high 10 rebounds while leading the Bucs with three assists. Jackson and Brown’s efforts on the glass marked the first time since the 2017-18 season that two ETSU players finished with 10+ rebounds, a feat last seen when current graduate assistant Malloree Schurr and Sadasia Tipps both grabbed 10 boards in the win at Western Carolina (Feb. 3).

After fighting off an abysmal start from the field, the Bucs used a strong fourth quarter to increase their shooting to 20-60 (33.3%), having a day to forget from distance with a 2-11 (18.2%) clip. The Bucs were balanced by a strong defensive effort, holding the Bears to just a 33.9% field goal percentage. The Bucs attacked the glass for 18 offensive rebounds, beating Mercer in the rebounding battle 46-42. ETSU limited their foes to just four points in the paint in the second half, recording a 34-26 advantage in favor of the Blue and Gold as well as a 19-7 tally in bench scoring.

ETSU fell into a hole early, their offense unable to find a rhythm, shooting their way to just 4-16 (25.0%) to trail 14-10 after one quarter. Jackson and Scheetz combined for all 10 points over the opening frame.

After 20 minutes, the Bucs slump continued, knocking down only 2-13 (15.4%) field goals in the second to hit just over 20% from the field heading into the break. ETSU recorded four assists on their six baskets while both sides struggled from deep, combining for 0-7 from behind the arc. Mercer found themselves with a 12 point lead late in the first half, holding it for a 28-16 lead at the intermission.

While shooting just 33.3% over the third quarter, the Buc defense tightened up, forcing the visitors to just 3-15 (20.0%) over the course of the third as the Bucs set themselves up in striking distance, trailing just 41-32 heading into the final frame.

In incredible fashion, the Bucs saw their deficit extend to 13 before overcoming the challenge, producing a 19-2 run to give themselves the first and only lead change of the game. Despite the Bears’ efforts to re-establish that lead, ETSU fought off every basket with a counter of their own, able to celebrate Senior Day in high spirits as the Bucs took down Mercer 56-54, sweeping the Bears for the first time since 2014-15, where Brittney Ezell’s side came out with wins in all three contests with today’s foe.

Mercer had some individual performances to boast, as Dougherty finished with a team-high 18 points and 14 rebounds, none more important than the two that were left off the board at the final buzzer. Shannon Titus grabbed 16 points and eight rebounds, while Jill Harris lead the team with 10 assists and two steals. The Bears combined for 11 blocked shots, led by Titus’ four. Mercer assisted on 16 of the 20 baskets made in the losing effort, but were held 0-3 from behind the arc and a combined 2-13 in the two games against ETSU. Both teams struggled from the line, Mercer feeling it more in the latter stages as they shot 14-21 (66.7%) compared to ETSU’s 14-23 (60.9%).

ETSU closes out their regular season next Saturday, looking to avenge the triple overtime home loss to Chattanooga as they face the Mocs in a 2 p.m. contest.