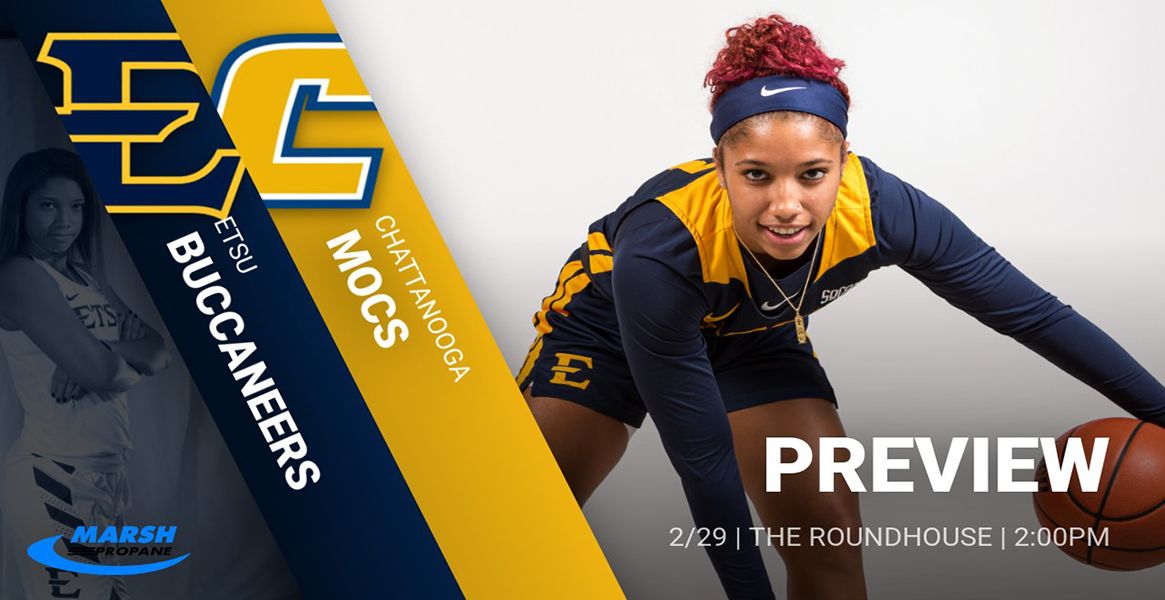 CHATTANOOGA, Tenn. (Feb. 28, 2020) – After their first matchup this year lived up to the storied history of the ETSU-Chattanooga rivalry, the Bucs and Mocs meet Saturday in each team’s final tune up before the Southern Conference postseason gets underway next week.

Honoring Jada Craig (Winston-Salem, N.C.), Arielle Harvey (Atlanta, Ga.), Taisha Murphy (Clayton, N.C.) and Anajae Stephney (Knoxville, Tenn.) for their contributions to the ETSU Women’s Basketball program in their years as a part of it, the Blue and Gold welcomed Mercer to town on Saturday’s senior day.

Looking for their first regular season sweep of the Bears since 2014-15, having beaten them in Macon 72-66 Jan. 23, the Bucs got off to a rough start, scoring just 16 first half points to trail by 12 at the break.

Once the teams returned to the court, Mercer would appear steady in the third quarter, able to move through the third stanza up nine points headed to the fourth, only to score the first four of the final frame to lead by 13 with eight minutes and 30 seconds remaining. But right when it appeared the Bears had sealed ETSU’s fate, the Bucs busted off a 19-2 run during which Amaya Adams (Kansas City, Mo.) scored eight points to take a four-point lead to the final few minutes in Brooks Gym.

Mercer, though, would fight back to score six of the next eight points and tie the game at 53 with 46 seconds to go. But that’s when the Bucs gave the ball to their star, redshirt junior guard Micah Scheetz (Knoxville, Tenn.) scoring with eight seconds left to give ETSU a two-point lead. While Mercer would draw a foul and go to the line three seconds later to attempt to tie the game, Shannon Titus would split the pair, leaving the Bears in a substandard situation. With a one-point lead, ETSU would leave the door open, making one of their two as well, giving the ball back to Mercer with four seconds to go. The Bears would give their last chance to the dynamic Jaron Dougherty, who would drive in from near midcourt only to hoist a shot after the final buzzer sounded, unable to get off the would-be game-tying shot, ETSU completing their come-from-behind triumph 56-54.

The sophomore Adams came up big down the stretch, scoring eight fourth quarter points en route to setting a new career high with 13 points. Similarly, Gabby Brown (Fort Walton Beach, Fla.) made a massive impact on the glass, snagging a career-high 10 rebounds while assisting on a pair of fourth quarter threes that was part of the Bucs 19-2 run that turned a 13-point deficit into a four-point lead. The consistent force for the Blue and Gold throughout the afternoon was Shynia Jackson (Warner Robins, Ga.), who put up monster numbers that included 18 points and 15 rebounds.

Chattanooga has been hot lately, winning each of their last four to climb into a tie atop the Southern Conference standings with just one game to play.

The 10-17 Mocs, who won just one non-conference game, have managed their turnaround this year by coming out on top in all of the close ones, each of their four victories over their perfect stretch of results coming by six points or less.

Riding the double-digit scoring streaks of Lakelyn Bouldin and Bria Dial, who have each scored 10-plus points in each of their last four games, Chattanooga has guaranteed themselves their 21st straight winning season in Southern Conference play. UTC are second in the league in three-point percentage and free throw percentage during league play, while ranking second in the SoCon in field goal percentage defense during conference games.

Saturday’s faceoff between the Bucs and Mocs in Chattanooga will be the 87th time the two teams have tangled, the most against any one opponent in Buccaneer history, Chattanooga leading the all-time series 62-24.

In their first meeting this year, a triple overtime thriller reminded fans just how important the games in this series are to each side. Able to decide nothing through 40 minutes of play after Scheetz rimmed out a potential game-winning shot as the fourth quarter horn sounded, the Bucs and Mocs marched into overtime at Brooks Gym.

Unfortunately for the Blue and Gold, after their chance to win in regulation fell by the wayside, they’d see the same opportunity, and same result come around at the end of the first overtime, Scheetz with the ball in her hands unable to end the game. Enter overtime number two, this time the shoe on the other foot with Chattanooga’s Eboni Williams possessing the ball at the end of the second overtime with a chance to win. Williams, though, felt ETSU’s pain, unsuccessful in her bid to end the afternoon as five more minutes of basketball would follow the 50 already in the books.

Once the third overtime commenced, the Bucs found themselves short-handed. Already without Harvey, who missed the game with an ankle injury, Craig had to leave the game with injury while Tijuana Kimbro (Memphis, Tenn.), E’Lease Stafford (Lawrence, Kan.) and finally Jackson all fouled out before the three-minute mark of the third overtime. That’s when the Mocs were able to create space, and ultimately, storm away from ETSU, a 91-82 victory in the second-longest game in ETSU history.

The win for the Mocs has catapulted them to winning six of their last seven, the first in the span coming against ETSU, while the Bucs had won just once following the Feb. 1 contest until their senior day win over Mercer.

The Buccaneer Sports Network will carry the 2 p.m. start, along with a half-hour pregame of the contest, with host Mike Gallagher. Gallagher will look back to the Bucs matchup with Mercer, break down the meeting with the Mocs, have a conversation with head coach Brittney Ezell and much more. Listen here.

Saturday’s game will also be broadcast on ESPN3, a video stream available here.

To purchase tickets to cheer on the Buccaneers in the Southern Conference postseason in Asheville, N.C., click here.