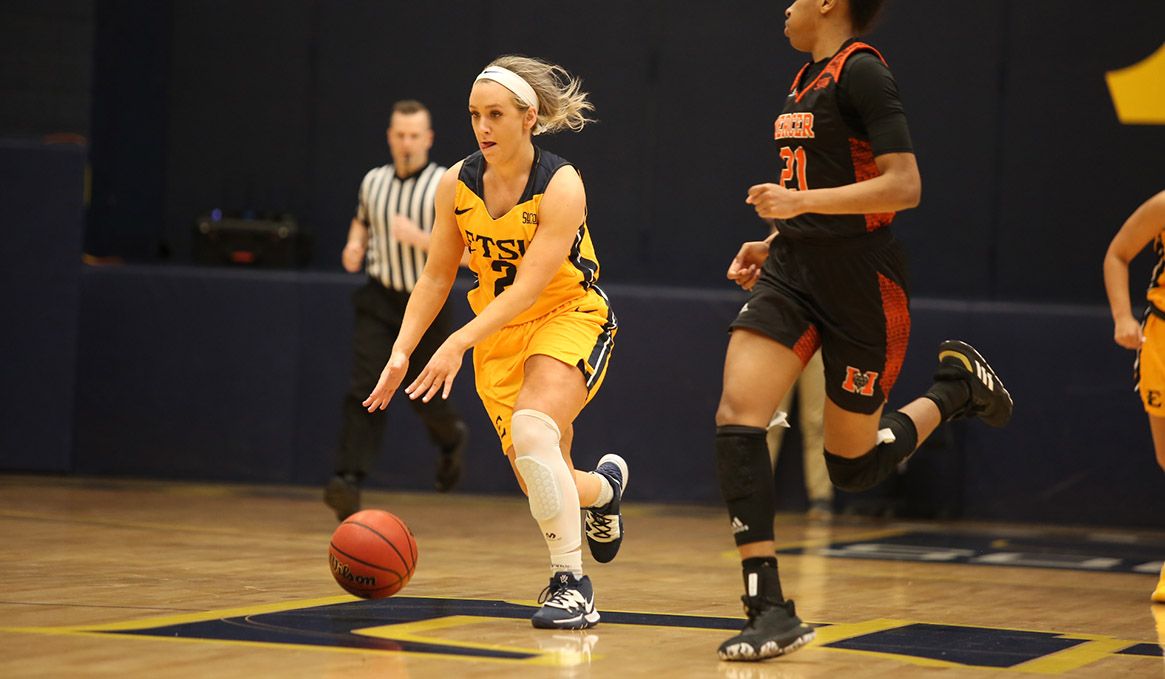 CHATTANOOGA, Tenn. (Feb. 29, 2020) –  In a rematch from the second-longest game in Buccaneer history that spanned three overtimes, the ETSU Women’s Basketball Team was unable to exact revenge against its in-state rivals, falling to Chattanooga on Saturday afternoon in a 69-65 contest at the McKenzie Arena.

Trailing by two heading into the final frame, the Bucs rallied through the entirety of the fourth to tie the game up at 63-63 with a minute left in the contest. The hosts used a 6-6 stroke from the line in the final minute to score six of the final eight points, walking out of the arena with the win and the two seed in the conference tournament.

Micah Scheetz (Knoxville, Tenn.) led the way for the Bucs with a tied game-high 21 points while providing three assists. E’Lease Stafford (Lawrence, Kan.) joined Scheetz with 21 points of her own, while Shynia Jackson (Warner Dobins, Ga.) finished in double-digits with 14 points.

ETSU shot 25-57 (43.9%) from the field as a whole, knocking down 9-14 (64.3%) attempts from three. In limited attempts, the Bucs were flawless at the line on 6-6 shooting. The Bucs surpassed their season average with 13 assists while grabbing seven takeaways from the Mocs.

After dominating in the first matchup at Brooks Gym, Chattanooga’s Eboni Williams started where she left off, scoring the first four points in the contest to give the hosts an early lead. Scheetz countered, knocking down a triple in the corner to cut the lead to one. After Williams grabbed her sixth point of the game, Jackson once again cut the game to one with her first bucket of the contest. Scheetz drained another triple from the same corner spot before finishing a tough layup with her non-dominant left hand to give the Bucs their first lead of the game at 10-8.

Williams once again attacked at the Bucs expense, grabbing a bucket while drawing a foul from the Bucs to give Chattanooga the lead back. It wouldn’t last long however, as Jada Craig (Winston-Salem) provided a rare spark from deep, connecting on her first three since January 11th in the first matchup with Western Carolina. ETSU carried that lead into the second quarter, leading 15-13.

After the Mocs connected on the first basket of the second, Scheetz went into creative mode, dishing out two dimes on back-to-back possessions to regain the lead. Stafford then knocked down two straight triples for the Bucs in between a UTC basket to take their largest lead of the game at 25-17. Chattanooga chipped away with six straight points of their own before ETSU killed the momentum with a Scheetz jumper. The Bucs held that lead into the break, owning a 33-29 advantage over their in-state rivals after 20 minutes.

Scheetz led all scorers in the first half with 12 points on 4-9 from the field. Combined, Scheetz, Jackson and Stafford led with 28 of the Buccaneer’s 33, almost outscoring the entire UTC squad. ETSU found comfort from behind the arc, connecting on five of their nine attempts. ETSU assisted on eight of their 13 made field goals.

Stafford got the third quarter underway by knocking down her third triple of the game to increase the Buc lead. Chattanooga tried to respond quickly, cutting the lead to as much as two before Jackson sent in another from distance to separate the sides by multiple possessions. The hosts pressure finally paid off in the final moments of the third, as Lakelyn Bouldin connected on the second three of the game for the Mocs while drawing a foul, capping off a four-point play to take a 48-46 lead into the final stanza.

Trying to send their seniors off with a high on Senior Day, the Mocs grabbed the first basket of the fourth period. ETSU fended off the hosts over the quarter, not allowing the lead to extend past four. After a Stafford jumper to cut the lead to two, Craig forced a steal that the Bucs took advantage of, Scheetz knocking down a shot to tie the game at 63 with just over a minute to go.

Despite the late momentum, the Bucs fell victims at the free throw line. After drawing a shooting foul, the Mocs knocked down both free throws to retake the lead. Unable to get an equalizing bucket, the Bucs were forced to extend the game. Chattanooga knocked down all six free-throw attempts in the final minute, escaping the afternoon with a home win.

Bria Dial led the way for the Mocs with a team-high 19 points. Abbey Cornelius grabbed 16 points, nine rebounds and three blocks in the win, while Williams and Bouldin each finished in double-digits with 12. Chattanooga shot 21-46 (45.7%) from the field, struggling from behind the arc by only connecting on 2-18 (11.1%) triple attempts. Outshooting the Bucs in free throws (33-6), the Mocs took advantage with a 25-33 (75.8%) clip from the charity stripe.

The Bucs take on the Southern Conference Tournament in their next matchup, being drawn up against the No. 3 UNCG Spartans in a 5:45 tipoff in Asheville. The game is scheduled for March 5.