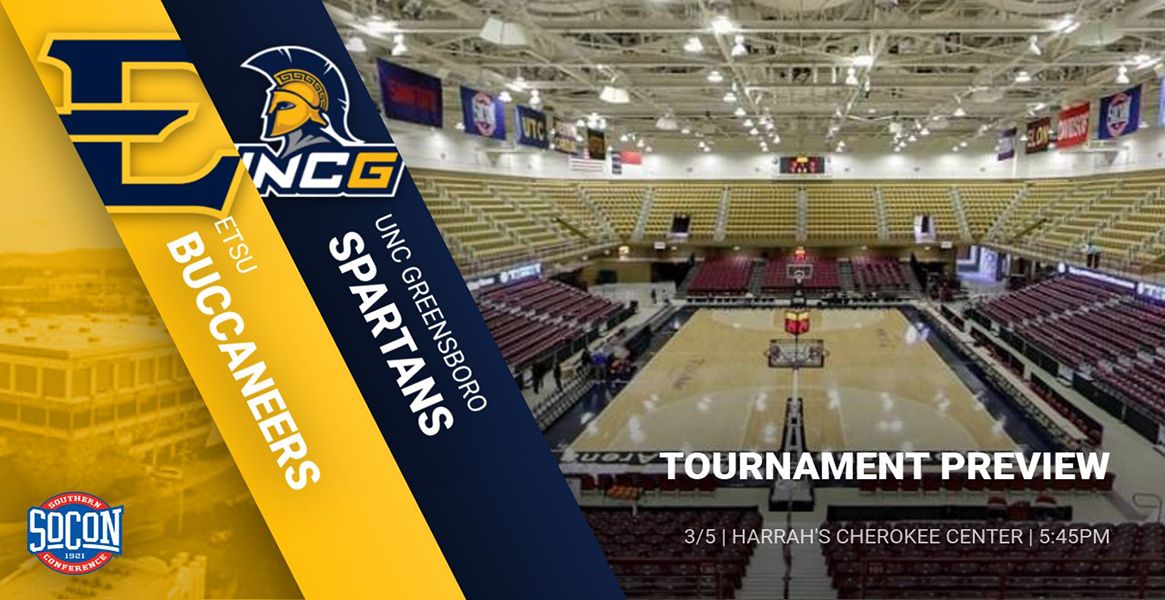 ASHEVILLE, N.C. (March 4, 2020) – Entering the conference postseason as the six seed for the sixth time in program history, ETSU Women’s Basketball travels to the Harrah’s Cherokee Center, formerly the U.S. Cellular Center, for a first round fight with foe UNCG.

ETSU opened the 2019-20 season in front of their second-largest crowd in program history, nearly 6,000 filing into Freedom Hall to witness the Blue and Gold host the University of Tennessee for just the second time in the last 38 years. While the Bucs would come up narrowly short of pulling off a monumental opening night upset in a 72-68 final, they would bounce back three days later on the road against Liberty in a thrilling 63-62 win, Shynia Jackson (Warner Robins, Ga.) making a layup with one second remaining to flip a one-point deficit to a one-point win.

While Brittney Ezell & Co. would lose their next four, they’d go on the road and defeat Appalachian State at the Holmes Convocation Center the Monday before Thanksgiving, the 36th time ETSU has beaten the Mountaineers, their second-most victories against any program in school history.

Just two games later, a tremendous opportunity presented itself to the Buccaneers in their first game of December, and they wouldn’t miss capitalizing on it, defeating Wake Forest 67-60 to claim their first win over a Power 5 program since defeating Kentucky 59-50 Dec. 12, 2008.

The Blue and Gold would close December the same way they started it, defeating South Alabama and Converse College to conclude the calendar year, accumulating five non-conference wins throughout non-league play, three more than their 2018-19 out of conference slate.

Once conference play got underway, ETSU would split their first two games, dropping their SoCon road opener against UNCG before beating Western Carolina for the 54th time, the most wins Ezell’s squad has against an opponent over the life of the program.

12 days later, the Bucs would return to the road, facing a Mercer team that had won 34 straight league games entering the year, besting the Blue and Gold eight consecutive times. But it was clear that ETSU was fed up with the results of the recent past against the Bears, scoring 27 points in the second quarter, the second-most in a single quarter this year, en route to a 72-66 win at Hawkins Arena.

Two weeks after their triumph over Mercer, Ezell was looking for her 100th win as leader of ETSU Women’s Basketball, and the Bucs took all the drama out of whether they would get their head coach to the century mark, scoring 28 of the first quarter’s 36 points on their way to crushing the Catamounts 76-49 to sweep the regular season series with Western.

The Blue and Gold’s final victory of the regular season came against Mercer, a dramatic win on Senior Day in which the Bucs rattled off a 19-2 run to overcome a double-digit deficit with less than nine minutes to go in regulation. Trailing by 12 at the break, the game stands as the largest halftime margin the Bucs have overcome since a Valentine’s Day 2011 75-65 win over Jacksonville in which they were down by 14 at the midway point before outscoring JU 45-21 in the second half.

After finishing .500 or below each of the previous 12 league seasons, UNCG has had a banner campaign, going 10-4 in the Southern Conference to take a share of the SoCon regular season championship.

Led by the program’s all-time leading scorer Nadine Soliman, the Spartans closed the regular season by winning five of their final six games, the first successful result in that span a 65-45 victory over ETSU. The strongest run of results the Spartans had in their 2019-20 journey came from Dec. 16 through Jan. 23, a five-week stretch in which they won nine consecutive times.

Soliman has scored over 2,000 points in her career and led the Southern Conference in scoring this season, averaging 17 points per game. The senior scorer, though, is not alone, fellow senior Te’ja Twitty and redshirt junior Aja Boyd also averaging in double-figures over the Spartans 29 games. The trio were the lion’s share of the reason UNCG averaged 64 points per game, though they were also the central figures on the better end of the floor for the Spartans, Boyd leading the team in blocks while Twitty led the team in steals for a defense that allowed just 55 points per game, six less than any other side in the SoCon.

Thursday’s Southern Conference postseason first round action between the Bucs and Spartans will be their 36th all-time meeting, ETSU leading the series 19-16, though UNCG claimed both of the regular season contests with the Blue and Gold earlier this year.

The one common theme across the Jan. 9 and Feb. 8 defeats ETSU suffered at the hands of their SoCon postseason opponent was the stifling defense the Spartans showed, holding ETSU to 11 points in the first half at Brooks Gym while allowing just 92 combined points between the two games. Soliman lit up the Blue and Gold in Johnson City, lofting home four three-pointers on her way to 29 points on the afternoon, while game one in Greensboro saw the Spartans jump out to a 14-point first quarter lead and never look back.

The last time these two teams met in the Southern Conference postseason was in a semifinal matchup March 2, 2018 for the right to face Mercer for the league championship and automatic bid to the NCAA Tournament. In this go around, roles were reversed, UNCG the six seed while the Bucs were the high seed, as UNCG is this year. Despite the discrepancy in seeding, though, a competitive contest would unfold, the teams tied at 22 going to halftime.

After the break, ETSU would outscore the Spartans by seven in the third quarter and stretch their lead to as big as 10 with under eight minutes remaining. UNCG, however, had fight left in them, streaking back to take a 52-51 lead to the final minute of play. The Blue and Gold, though, would score the final three points and force Twitty into a miss at the rim as time expired that would’ve sent the game to overtime. The Bucs would go on to the WNIT after losing to eventual league champion Mercer 68-53 in the Southern Conference final.

The Buccaneer Sports Network will carry the 5:45 p.m. start, along with a half-hour pregame of the contest, with host Mike Gallagher. Gallagher will look back to the Bucs regular season, break down the meeting with the Spartans, have a conversation with head coach Brittney Ezell and much more. Listen here.

Saturday’s game will also be broadcast on ESPN+, a video stream available here.

To purchase tickets to cheer on the Buccaneers in the Southern Conference postseason in Asheville, N.C., click here.