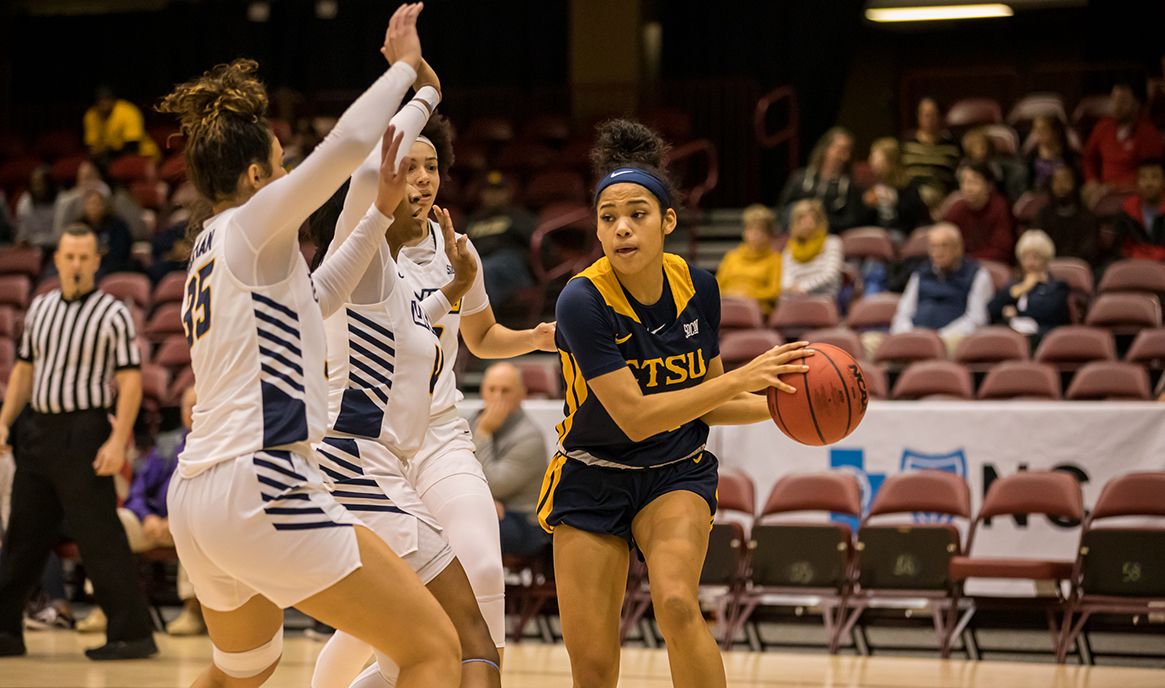 Entering the half, the Bucs did enough on the defensive side to head into the locker rooms with a two-point advantage. The offense struggled to get into the gear, halting the Buccaneer season in the quarterfinals as the Spartans were able to outscore the Bucs by 14 in the third to help their side advance to the semis on Friday afternoon.

ETSU ended its season at 9-21, tallying a 4-10 record in conference. UNCG advanced to take on No. 7 Mercer in the semifinals, who knocked off No. 2 Chattanooga earlier this evening. The Bucs move to 3-6 as the number six seed, falling to 1-3 against UNCG in postseason play.

E’Lease Stafford (Lawrence, Kan.) led the way for the Bucs with a team-high 13 points. Micah Scheetz (Knoxville, Tenn.) finished with 11 points, the two combining for just 8-33 from the field. Arielle Harvey (Atlanta, Ga.) closed out her career with seven points on 3-6 shooting while Amaya Adams finished with a team-high five rebounds.

SoCon Player of the Year Nadine Soliman opened the game with the first six points for the Spartans. Trailing 9-2, the Bucs grabbed their first field goal of the game through Harvey, connecting from deep to cut the lead to four. ETSU cut the lead to as few as two points after Stafford’s fade from seven feet, and kept it to one possession after the opening quarter closed with the Bucs trailing 15-12.

Stafford tied the game for the first time since 0-0 with a quick three to start the period, reaping the rewards of the effort of Amaya Adams (Kansas City, Mo.) on the offensive glass to level the game at 15. Needing nearly three minutes to score its first basket, UNCG took a 6-0 run as the Buccaneer offense couldn’t capitalize on the slow Spartan start before Scheetz broke the duct with a free throw and a Stafford bucket closed the gap yet again. With the Spartans leading 23-18, the Bucs spurted to a 7-0 run into the halftime break, taking its first lead of the ball game. Stafford hit her second three of the contest to level the score at 23, before Cierrah Perdue (Atlanta, Ga.) grabbed her first points of the game, picking up a loose ball for the offensive rebound and put-back to give the visitors the 25-23 advantage heading into the break.

ETSU shot just 9-30 (30%) from the floor in the opening 20 minutes, assisting on five of the nine made baskets. Despite the struggles from the field, pestering defense from the Bucs, including 12 forced turnovers, kept the Bucs right with the side that defeated them twice in the regular season.

After shooting 50% in the first quarter, the Spartan defense found a basket hard to come by in the second. The Bucs pressure increased, forcing UNCG into just a 3-13 (23.1%) clip from the field and only eight points. The Bucs held the Spartans scoreless in a range of categories, including points off turnovers (8-0), second chance points (7-0) and bench points (6-0).

The Spartans opened the third quarter with the first three points before Ti Kimbro (Memphis, Tenn.) answered the call to regain the Buccaneer lead. The next three minutes belonged to the Spartans, connecting on four straight baskets to produce an 11-0 run to flip the result to a 37-27 UNCG advantage heading into the media timeout. That run extended to 21-8 to end the half, the Spartans connecting on their last eight of 11 baskets.

Trailing 47-35 entering the final frame, the Bucs would need to channel a comeback similar to their contest with Mercer to edge back into the game. ETSU were unable to pester the Spartans enough, closing to eight before being brought back to double-figures. The designated home team held on, advancing to the next round of the conference tournament with a 57-47 win over the Buccaneers.

“Sometimes the ball just won’t go in,” said ETSU Head Coach Brittney Ezell. “ If you would’ve told me E’Lease and Micah would combine to go 8-for-33, I’d say you’re a liar, and today was just one of those days. It’s never been that way for them. They’re two of the most productive kids, gym rats. And you try to tell kids that hard work pays off and it didn’t today.”

After grabbing the first six points of the game for her side, the Bucs were able to control Soliman to just 10 points. The SoCon Player of the Year found other ways to involve herself, climbing her way to 11 rebounds and a double-double. Aja Boyd had a game-high 20 points on 7-9 shooting to lead the Spartans. Taking 13 fewer shots than ETSU, UNCG proved more efficient from the field, knocking down 20-45 (44.4%) of their field goals while dropping 15 of their 18 attempts from the charity stripe.