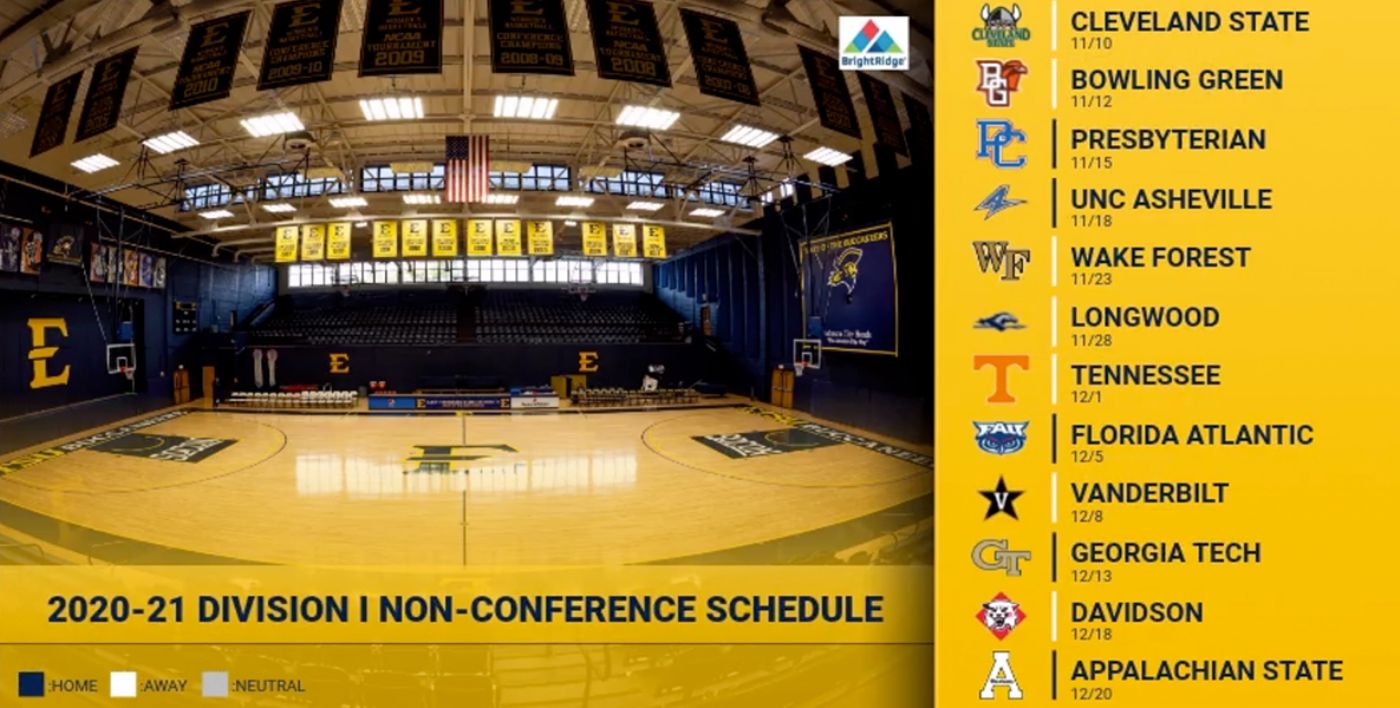 JOHNSON CITY, Tenn. (July 7, 2020) – True to form, ETSU Women’s Basketball Head Coach Brittney Ezell announced Tuesday a rigorous non-conference campaign headlined by many of the top programs in the country over the first two months of the Bucs 2020-21 season.

“We have always believed in having a challenging non-conference schedule and this year is no different,” Ezell said. “Scheduling was a bit more complicated this year but our philosophy remained the same: we want our kids to play against as many different styles as possible and be able to provide them with the best opportunities for growth that we can.”

Ezell’s squad opens the 2020-21 slate Nov. 10 on the road at Horizon League upstart Cleveland State, who were projected seventh in the 10-team conference last year, but finished second in the Horizon in overall wins by notching 21. ETSU stays in the Buckeye State to take on Bowling Green two days later before opening their home schedule in Brooks Gym Nov. 15 with Big South side Presbyterian, the Bucs chasing that contest three days later with another Big South foe at Brooks in the Bulldogs of UNC-Asheville.

“It’s a challenging first four games,” Ezell said. “Cleveland State had an incredibly good team last season and plays a style unlike anyone in the Southern Conference. Bowling Green is a traditionally strong mid-major program. Presbyterian and UNC-Asheville are great regional opponents for us that will help re-establish some rivalries. All four games should be exciting to prepare for this November.”

The middle portion of the non-conference brings big names to the Bucs path, with a return matchup against Wake Forest in Winston-Salem Nov. 23 opening the three-week gauntlet. The ACC side is coming off their most conference wins since the 2011-12 season, but ETSU will be a confident group entering the contest, claiming their first win over a Power 5 opponent since 2008-09 by knocking off the Demon Deacons in a 67-60 upset last season in Johnson City.

“That win was a huge exhale for our program,” Ezell said. “It was an ‘ah ha’ moment of sorts that gave us a glimpse into how good the team could be in the future. We knew leaving Brooks Gym that night that the program was heading in the right direction, and we know with the players we have back and the ones that we’ve added since that the statement still stands.”

The Bucs close November by facing Longwood University in Farmville, Va., returning to their home state to open December against the University of Tennessee in Knoxville. ETSU nearly pulled off an upset of the Volunteers last year at Freedom Hall in front of the program’s second-largest crowd in its 53-year history, falling narrowly 72-68 on the season’s opening night.

“The crowd in Freedom Hall last season was incredible,” Ezell said. “The Tennessee game is always great for our region because it helps promote growth in the game of women's basketball around the area. As for us, we hope that it continues to foster a large amount of support for our university and program.”

The Blue and Gold return to Johnson City to host Florida Atlantic Dec. 5, only to return to the ranks of the Power 5s twice over the next eight days, the Bucs making the trip to Nashville to take on Vanderbilt before hosting Georgia Tech Sunday, Dec. 13. The matchup with the Yellow Jackets marks the fourth season in the last five that the Bucs have hosted a Power 5 opponent.

“We want to bring Power 5 schools to Johnson City for our fans,” Ezell said. “Obviously we schedule the way we do to grow our players and our program but we work extremely hard to get great home games to say thank you to those that support us. We love to play in Brooks Gym in front of the best fans in the SoCon.”