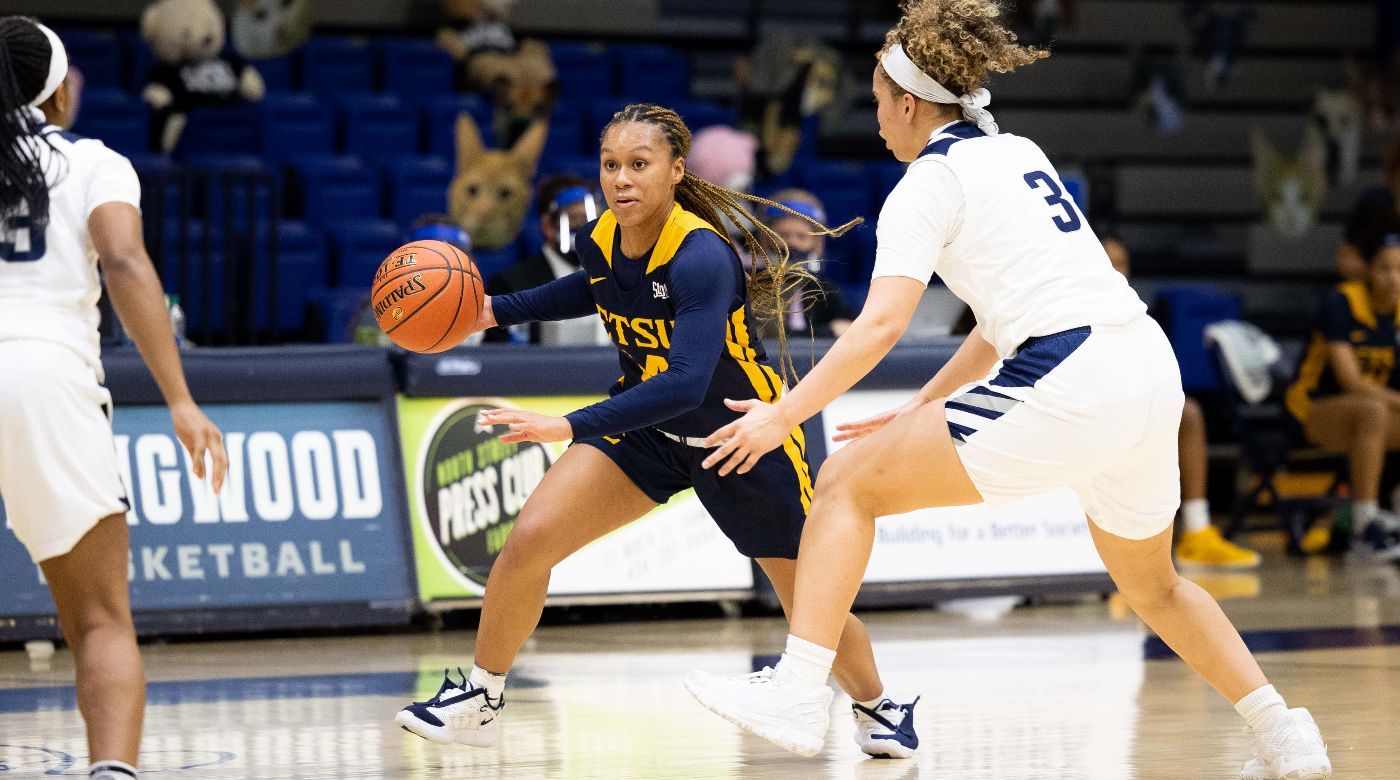 FARMVILLE, Va. (Nov. 28, 2020) – With so many unknowns coming into the season opener, Head Coach Brittney Ezell found some early answers.

With seven newcomers and a total of nine debuts in a blue and gold uniform, the ETSU women’s basketball team opened their campaign with a gritty performance against Longwood, winning 62-56 Saturday afternoon in Willett Hall.

The Bucs returned four players from last year’s squad, and while they played a major role on both ends of the floor, Ezell relied on a host of new players, including five freshman, that have never played a minute for ETSU. Jakhyia Davis (Knoxville, Tenn.) answered the call, the center providing a huge spark off the bench, scoring 13 points on 5-8 shooting while recording five rebounds in her first collegiate action. Mykia Dowdell (Oak Ridge, Tenn.), sitting out last season due to NCAA transfer regulations, opened her account with 12 points and four boards, while providing a spark on the defensive side of the ball. Jasmine Sanders (Charlotte, N.C.) added a seven point effort.

Kaia Upton (Nashville, Tenn.) continued where she left off the year prior, playing a part in all facets of the game. The junior guard led the team in rebounds, grabbing a career-best eight boards along with her eight points and three assists, while also pestering the Lancer offense with five steals. Amaya Adams (Kansas City, Mo.) notched seven points of her own, but more importantly shut down Preseason All-Big South First Team nominee Kyla McMakin, who shot just 2-19 for the Lancers before fouling out late in the fourth.

A slow start for the Bucs saw a quick 11-2 deficit moments into the game. The Bucs tried working their way back into the contest, using a heavy freshman rotation to do so. Davis, entering the game with just over three minutes remaining in the quarter, took just three seconds of play to grab her first career basket. It was another rookie grabbing her first bucket to score next, Imani Williams (Kankakee, Ill) taking advantage of a second chance opportunity to get on the score sheet. Despite 11 turnovers in the opening 10 minutes, ETSU remained within distance as they trailed by just eight heading into the second quarter.

Slowly but surely, the offense started to find its way in the second period. Heading into the media timeout, the Bucs used a nice pass from Davis to find a backdoor cut to Adams for an easy bunny to cut the lead to four points. Later in the period, Upton would find her first basket of the game and the final of the half to cut the Longwood lead to 26-23 heading into the locker room.

Despite 18 turnovers in the first half for the Blue and Gold, the Bucs used their defense to remain in the game, grabbing 10 takeaways while holding the Lancer offense to just 11-37 (29.7%) shooting from the field. Seven different scorers paced the offense for the Blue and Gold, including four points from Davis, Williams, Adams and Dowdell.

After tying the game at 28 early in the third, the Bucs finally made their move to their first lead of the game, using a 5-0 personal run from Upton, including a coast to coast play after pickpocketing a Lancer and driving through contact to finish the basket at the other end. Extending their lead to as much as seven, Davis closed out the scoring in the quarter with 15 seconds, drawing a foul and setting up another three point play for the Bucs to go into the final frame leading 43-40.

The hosts didn’t concede early in the fourth, using a seven point outburst to take a two-point lead with just under five minutes to play. It would be the last time the Bucs trailed however, as Davis yet again bullied her way into the post to put her side up yet again. The freshman provided six points and one assist in a 9-0 run that spanned three-minutes, and the Bucs would never let the gap close under two possessions the rest of the way as they left Willett Hall with an opening day win.

The win marks the first time since the 2017-18 season that the Bucs opened the season with a victory. The Bucs are now 5-3 in the Ezell era in season-openers and 4-4 on road-openers.

Longwood struggled from the field offensively but had a few strong individual performances. Anne-Hamilton Leroy’s late game spark helped her lead the team with 16 points, while Akila Smith finished with a 14 point, 10 rebound double-double. Tra’dayja Smith also finished with 14 points, pocketing five steals on the defensive side of the ball.

The Blue and Gold continue their three-game road trip to open the season by taking on in-state Power Five rival Tennessee. The Bucs and Lady Vols clash again just under 13 months since their slugfest at Freedom Hall, where ETSU’s efforts fell just short in the second biggest crowd in program history. Follow @ETSU_WBB on Twitter and check out etsubucs.com for updated information about Tuesday’s contest.